Glorkian Warrior: Trials of Glork is old fashioned in many of the best ways.

It's an arcade shooter wrapped up in wacky hand-drawn graphics that riffs on classics from the heyday of the wave-infused coin-op.

You guide a lanky multi-eyed alien along the surface of an asteroid, your trusty wisecracking backpack blasting up lasers of death into the swirling mass of extraterrestrial invaders swarming down around you.

It's not bullet-hell fast, sure, but it has the odd section where things get a little twitchy.

There's always something going on, be it a boss attack or a sudden wave of waddling fire-breathing creatures over which you need to jump. 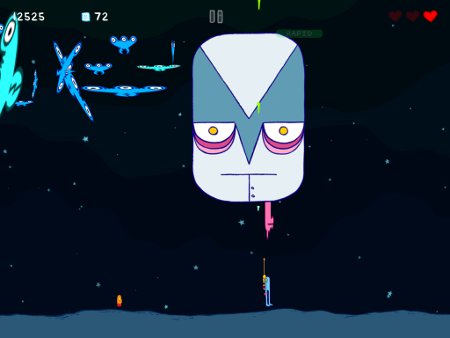 I have no idea what's happening in this screenshot

Slain invaders drop crackers that automatically mean new power-ups and game-changing buffs are unlocked when you've snaffled up enough. Like in the games it apes, you're always picking up vials here that change your lasers.

You can combine these boosts, too, so you might, for instance, grab a rapid-fire booster, increase its power with another pick-up, then round things off with a laser triple.

After a while, they'll all wear off, so grabbing them when they appear is essential.

You're given challenges to complete by a pair of bickering sisters in space suits. These challenges are usually something to do with killing or dodging, but one of them involves holding your breath. 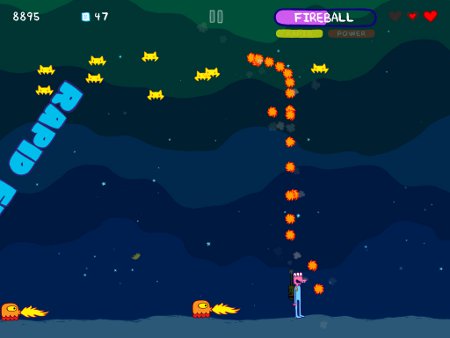 He won't look so happy when he sees what's behind him

You don't actually have to hold your breath to complete the challenge, mind. It's indicative, though, of the silly humour that glues the game together.

There's a neat rhythm to the play that means it's easy to lose yourself in the experience. And while things do get a little repetitive, you'll unlock another addition every couple of plays or so that will increase your high score potential.

Glorkian Warrior wears its influence's triumphs and failures on its own hand-drawn sleeves. And it succeeds, and fails, in much the same ways.

Mysterious and baffling shenanigans are occurring in 999: The Novel on iPad and iPhone right now

The Firing Line: 5 questions for Blindflug Studios on First Strike