3 more songs to cool! your way through

Hatsune Miku's sixth birthday isn't until Saturday, but Sega and Crypton are leaving no stone unturned - or revenue stream untapped - as they kick off the celebration.

Sega slid a new set of songs called the 'Lovely Pack' into the Bronze Award-winning rhythm game Miku Flick /02 on Friday, launching them alongside the English language version of the Hatsune Miku Vocaloid software and the US release of Hatsune Miku: Project DIVA F which - sadly - didn't make it to the Vita. 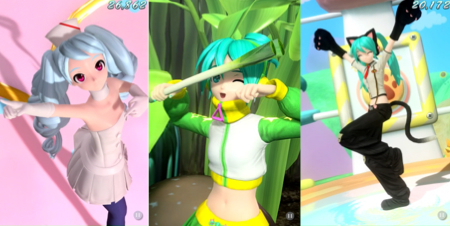 The first song in the pack, 'Love Coloured Ward' has Miku capering about in a nurse's outfit through a challengingly upbeat, 175 bpm song by Oster P.

The undeniably kawaii 'Nekomimi Switch' by Daniwell follows, and sees Miku don a pair of cat ears and paws as she dances along to the music.

Finally, Hayaya P's 'Beware of Miku Miku Bacteria', wraps up the Lovely trio as the slowest - but by no means easiest - song of the new pack.

Breach & Clear will burst on to Android on September 5th, alongside the first batch of new content