With Talisman Prologue HD for iPad and Android, developer Nomad Games and publisher Thumbstar are focused on crafting a single-player version of the cult fantasy boardgame Talisman.

One you can play on the bus without having to take along a model wizard and pockets stuffed with Event cards, that is.

With the game only days away from going live on the App Store and Google Play, we've been given the chance to take this ambitious mobile adventurer for a test stroll through the Plain of Peril. 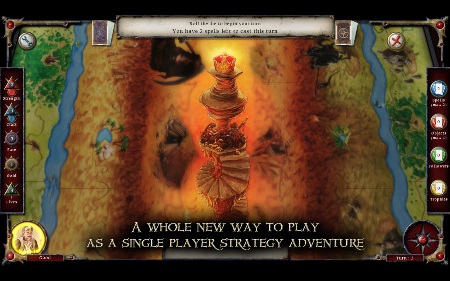 Now on its fourth edition, Talisman was first launched by Games Workshop in 1983. Over the years, it has deservedly earned cult status for its mix of high fantasy archetypes and streamlined dice and card mechanics.

The goal in the physical incarnation of Talisman is to be the first to reach the centre of the board (the Crown of Command). Once there, you are bestowed with the power to smite down other players.

Of course, the journey there is fraught with peril at every turn. The squares you land on result in random events you have to deal with, you see, from fighting mythical beasts to picking up a shiny new axe.

It's a fiercely competitive game, with the best players always looking for ways to scupper their opponents. So, the switch to a single-player focus for this digital version is a bold move by the developer team.

Instead of battling for supremacy here, then, you complete solo quests drawn from the 'Big Pool of RPG Tropes'. At launch, there will be 50 story-based quests to tackle, and ten drastically different heroes from which to choose.

Rather than being able to play as a hideous troll or the traditionally overpowered Monk from the outset, you begin as the mighty but rather bland Warrior. To unlock the next hero, you have to complete at least some of his missions.

You also need to develop your character's individual strength, wisdom, and health before venturing into the tougher inner plains (where beasties are tougher and tend to hunt in packs).

Quests only get tougher the further you get into the game, so mastering the buffs and weakness of each character (displayed prominently on their cards) is the secret to success. 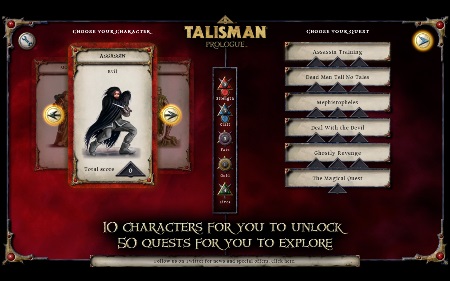 Where Talisman Prologue HD stands out from other top mobile boardgames, such as Elder Sign: Omens, Forbidden Island, and Puerto Rico, is its elegant introduction to the rules.

As someone used to wading through lengthy, confusingly worded manuals before rolling a single die, it's refreshing to find your hand being held through your first quests. So, you're shown straightaway how to roll, select an area to travel to, and how to resolve Event cards.

The advice is always succinct, and the explanations of risks very welcome. Rarely do you have to scrutinise stats yourself or pore over your collection of weapons and spells. This all makes for a surprisingly pacey game.

The wonderfully reproduced artwork from the original title has a painterly look on a tablet screen. For once, too, the virtual dice rolling that accompanies the movement and combat has been realistically animated. The gently tumbling sound is just music to any real boardgame player's ears. 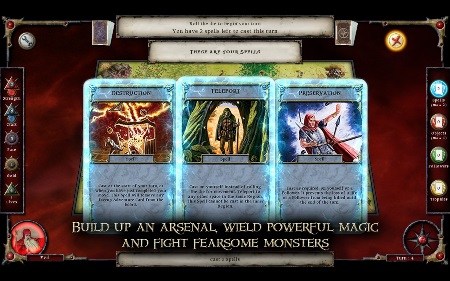 The battle to come

Nomad Games has really succeeded in replicating the sensations, look, and atmosphere of the original game in Talisman Prologue HD. This is a game that feels at home on an iPad, Android tablet, or large-screen phone.

We've only scraped the surface of the missions in this preview, so there are still stacks of content to wade boldly through. The £2.99 asking price is remarkably reasonable, then, especially considering the physical game will set you back 40-odd quid.

In truth, the sheer depth of the Talisman Prologue HD experience only really becomes apparent once you start choosing a good or evil alliance; gathering followers; and managing your inventory by visiting key locations (like the shop and the chapel). 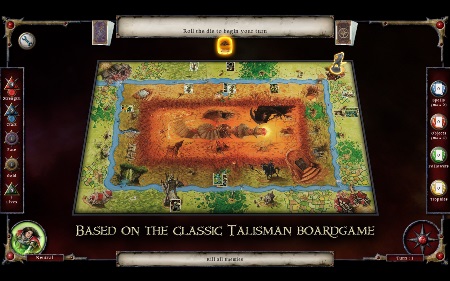 By the end of the summer, Nomad Games intends to have introduced multiplayer into the mystical mix via a paid expansion.

Whether this will be a purely local multiplayer experience - with players sharing a tablet - or a full online multiplayer mode that will enable would-be adventurers to do battle without the added strain of walking anywhere remains to be seen, mind.

If the thought of vintage tabletop action on your touchscreen tab tickles your warrior-like beard, then fear not: both the iPad and Android versions of Talisman Prologue HD are due out on April 25th.

Questing on a budget: Kemco puts its Android RPGs on sale for 99c / 99p

Your iOS or Android Game of the Week: Talisman Prologue HD