If Aitcheson's forthcoming title makes it past the Cupertino company's approvals team unscathed, it will be available to download for your iPad from the App Store on March 14th.

For those of you who haven't seen our previous coverage of the game, your aim in Slamjet Stadium is to outscore a variety of opponents in a futuristic footy-esque sport known as Slamjet.

Unlike actual football, Slamjet has next to no rules. In fact, don't expect to win very many matches if you're not prepared to use every cheap and dirty tactic in the book to overcome your opponents. 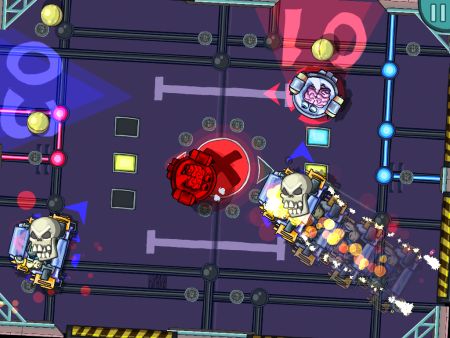 Slamjet Stadium features a single-player mode in which you're pitted against seven teams in arenas that are filled with deadly saws, wormholes, and power-ups.

You can also face off against your buddies, your family, or a complete stranger (if you're that way inclined) in fast-paced local multiplayer matches on a single iPad.

Look out for Slamjet Stadium on March 14th.

Your iOS or Android Game of the Week - Gun Bros 2