Gorilla Gondola is curiously reminiscent of recent iOS hit Tongue Tied! Both games feature animals in unusual situations, and both use unique methods of propulsion to guide the mammalian avatars.

Here, the titular ape sits atop a cable car, which automatically moves slowly forward. Your job is to collect bananas while avoiding obstacles along the route.

Naturally, you’ll need to jump out of harm’s way on occasion, but you’ll always land back on the cable car, no matter the angle of your leap. The only problem is that you have to keep the car safe, too.

In order to clear obstacles you’ll have to jump up and slam down with some force to push past rocks, mines, stalagmites, and stalactites. Tilting your iOS device in mid-air allows you to fine-tune the movement of both gorilla and gondola.

This takes some getting used to. When a sharp icicle is hanging down, you first need to leap upwards to get enough downward force to pass underneath it.

Then you’ll see a spire poking up from the bottom of the screen and stomp downwards to generate the force to propel the car up and over.

It’s a system that seems counter-intuitive at first – and, indeed, it never feels entirely natural, even after a period of acclimatisation.

For a while it doesn’t seem like too much of an issue. The level design is friendly enough in the early stages to ease you in, and many obstacles can be tapped out of existence as a last resort when you’re stuck.

Then you’ll be asked to propel either gorilla or gondola through coloured gates, to tap the power switches of fans and lasers to turn them on or off – and then to defeat agitated avian foes by crushing their skulls with your remarkably sturdy ride.

None of these objectives is crucial – though your ‘awesomeness’ rating at the end of a stage is affected by them all, and you’ll lose a life if burned by the beams – but they’re not your only concerns.

Having to navigate airborne minefields from the third world onwards proves just a little too frustrating given the idiosyncratic controls, especially as your actions can occasionally be misread.

Not only that, but swiping downwards from the top of the screen (which you’ll have to do fairly frequently) all too often sees you inadvertently pulling down your notifications list.

That none of these problems is entirely ruinous has much to do with the force of the game’s presentation. The backgrounds are colourful and sumptuously detailed, from an alpine sunset to a neon-glazed New York.

In fact, at times it’s almost too much - the foreground obstacles can occasionally be hard to spot when the action is at its busiest.

Even given these frustrations, Gorilla Gondola is a very likeable game, and stands out an original conceit, executed with a healthy dose of charm and inventiveness. It’s just a pity it’s not more fun to play. 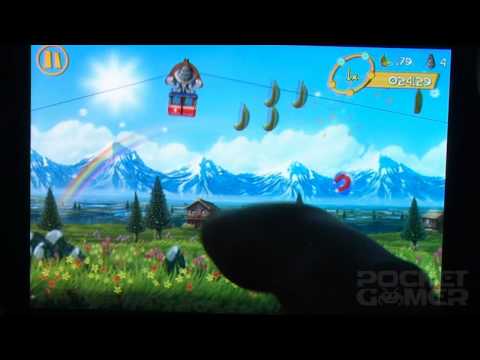 Awkward controls spoil an original idea in a game that looks better than it plays
By Chris Schilling
| Feb 8, 2012 |
iOS
Find out more about Gorilla Gondola