So gossamer-thin it would disintegrate at the force of a sneeze from 20ft away, the latest iOS title from Bike Baron dev Mountain Sheep is nonetheless the most entertaining new game I’ve played this week by a distance.

It’s an astonishingly basic one-on-one ice hockey game – you’re the red team, and you have a minute and 45 seconds to outscore the blues, with just a virtual stick and single shot button at your disposal.

Goalkeepers – at least on the lower two difficulties – are AI controlled, so you’re merely called on to control your outfield player on the ice. Arctic circle

That’s easier said than done, however. You are, after all, skating around on the slippiest surface known to man – and here it really feels like it. You’ll attempt to turn on a sixpence only to corner like a JCB.

But it’s these skiddy controls that add to the fun. There’s an element of sporting slapstick to the action, as you and your opponent chase after the puck, then each other, awkwardly dancing around the ice.

It’s made more fun by a restriction that at first seems limiting, but soon makes sense. You can only shoot in the direction you’re facing, which makes goal approaches amusingly awkward. Frozen shots

You’re also able to trip up your rival without penalty by tapping the shot button at the right time – useful when they’re bearing down on goal with the bottom corner in their sights. AI goalies react well to direct hits but struggle at shots from awkward angles and rebounds off the walls.

In fact, the latter often makes it feel like a marginally more sophisticated take on air hockey, as the puck rebounds all over the place. Hit a powerful slapshot and it can often ricochet back into your own goal.

It’s these comic moments that make the game more than the sum of its simplistic parts, particularly when another player joins in. Rinking for two

This time the controls are kept at either end of the screen, both competitors holding the device simultaneously as they battle it out on the rink.

Moments of frustration at an AI opponent getting three identical goals within seconds of the face-off melt away in multiplayer, where unfortunate mistakes only elicit hoots of laughter.

Even goalkeeper errors, as frustrating as they can be, are forgivable here, and usually accompanied by amused shouts of mock-horror at their ineptitude. Puck club

Switch to manual control – the keeper’s lateral movement is also guided by the stick – and it gets even funnier, as the goals rain in more regularly and both players get progressively more frantic.

We can't help but think that Mountain Sheep could do so much more with the idea, but as a throwaway bit of nonsense Ice Rage is hard to beat.

It’s as shallow as the App Store gets, but while it’s hard to recommend without serious caveats about its longevity, sometimes junk food gaming is what you need – and this is good quality junk. 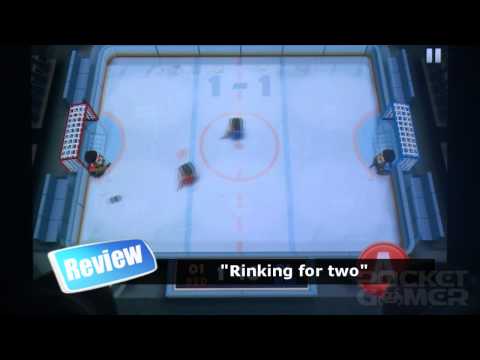