Squirmee and the Puzzling Tree

Some of the iPhone’s most successful and challenging games have relied on a combination of simple controls and novel ideas to create something unique and often deceptively difficult.

Squirmee and the Puzzling Tree is the latest iOS game to follow this tradition, combining these two key ingredients with a cute exterior to concoct a puzzler that is as taxing as it is enjoyable.

Pink and the Beanstalk

If ever there was a perfect example of a game not needing a story penned by a Pulitzer Prize winner to be compelling and riveting, it’s Squirmee and the Puzzling Tree.

Pink (not the feisty Grammy Award-winning singer) is stranded atop a mysterious tree that has suddenly spouted from the Earth. It’s up to her brother Squirmee to rescue her: to do so, he must negotiate a series of puzzles whose origins are as inexplicable as the tree in which they’re located.

In each of these levels, you must control the eponymous hero on a movement pad along a track, with the ultimate aim being to reach the star-shaped goal. In your path lie obstacles such as saws and balls, which, naturally, seek to prevent your safe passage to the exit.

The key to success is manipulating your environment by using a simple control system. Every object, including your movement pad, has movement patterns dictated by its colour.

Initially, there are four colours: grey, red, green, and purple. Touching and holding the screen stops grey and red objects, while purple items only move when the screen is touched.

The movement of the red objects can also be rewound by sliding your finger down the screen. Green elements cannot be halted in their tracks, and are in a state of perpetual movement. Later levels introduce new colours, each with their own behavioural patterns.

Completion of a level is dependent on harnessing these powers and controlling elements in the correct order. A clock times your progress, and the quicker you complete a level, the more likely you are to be awarded all three stars.

Beauty is only skin deep

The presentation and characters may be cutesy, but like so many puzzlers, it merely disguises some fiendishly clever and difficult level design.

Taking into account the vast number of different patterns of movement really puts a strain on your multitasking ability, with solutions requiring many failed attempts.

The touch and swipe control scheme is simple yet powerful, although one criticism is that it leaves very little margin for error, especially when rewinding. Just one slight slip of the finger in one of the occasional boss battles, for instance, can consign Squirmee to an untimely death.

The only accusation that can be levelled at Squirmee and the Puzzling Tree is that perhaps it is too inaccessible. Mercifully, however, the addition of a skip button ensures that those who find one level too difficult aren’t deprived of what is a fantastic little game.

Squirmee and the Puzzling Tree’s unique gameplay elements and control mechanisms mean that this is perfect for those wanting something fresh and engaging in which to test their problem-solving skills. 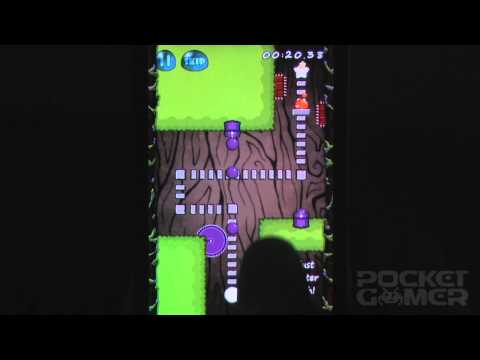 Squirmee and the Puzzling Tree’s tricky puzzles, novel controls, and distinctive ideas ensure that it firmly sits near the top of the iPhone puzzle tree
By Steve McCaskill
| Jul 25, 2011 |
iOS
Find out more about Squirmee Redux

Squirmee and the Puzzling Tree goes on sale, gets updated with new name and 're-imagined' levels

Squirmee and the Puzzling Tree