Out of the box and through the camera

Mobile World Congress 2010 wasn't blessed with a lot of interesting mobile games but there were two examples that we eventually found on the Samsung bada stand from French developer int13.

Incidentally it was the company behind Parrot's AR Drone, which gained so much fame at CES.

It's a specialist in augmented reality gaming; that is games which combine features such as a live video feed from phone's camera, and accelerometer movement with computer graphics to create innovative experiences.

So in keeping with Samsung's big push on its new bada mobile platform, it seems the manufacturer is looking to promote such innovative experiences on its first bada phone, the Wave or S8500.

Hence the reason that int13 will be providing two launch bada games, both of which use the phone's camera to augment reality.

One is called Kweekies, but as it wasn't working properly, we can't really comment on it, other than to say it's Pokemon nurturing-type game in which you have to look after creatures and fight with them. It will be available at launch, priced at 3 Euros.

We did spend some time however playing with AR Defender.

As with Kweekies, it uses the Wave's camera combined with a paper symbol that is used to fix the location of a defence tower on the screen.

Then, in usual tower defence style, various enemies approach the tower on the ground and in the air, which you have shoot using your fire button while moving the phone around to target them using a cross-hair.

This wasn't especially amazing in terms of the gameplay, but as it's coming free, pre-loaded in all Wave phones, it should certainly provide something different. And it is interesting in terms of how enemies move around the world you create when you place your paper symbol down.

The symbol will be provided in your bada phone's box or available for download from the internet in the case of Kweekies by the way.

As you can see from the following video, there may also be some issues in terms of ambient light, but the version we played wasn't complete so there should be plenty of time for int13 to hone the exact parameters of how it works. 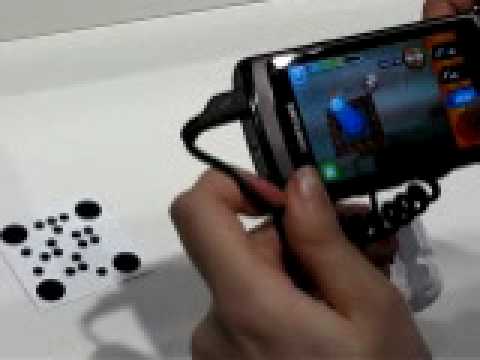 Subscribe to Pocket Gamer on
Both AR Defender and Kweekies will be released with the Wave, due sometime in April.

The Crystal Maze out now, puzzling the iPhone audience

How to play augmented reality game AR Defender on your Wave