They’re not all dross, you know

There are plenty of tired clichés in the world of video games which, when analysed, don’t stand up all that well. Here’s a few: all gamers are antisocial nerds. Mobile phones are no good for games. Games are for kids.

Here’s another to join that list: all movie tie-in games are rubbish.

It’s true that many are, of course. Countless publishers have been guilty of bashing out lazy licensed titles to cash in on the popularity of a particular IP. But it’s not all bad.

Below is a list of five examples of the mobile movie tie-in done properly. Each game stands on it own as an example of fine mobile gaming, with the licenses merely acting as seasoning.

This is evidenced by the fact that the majority of games on our list are linked to fairly mediocre films, meaning they’ve had to overcome the negative stink sprayed all over them by dodgy IP. 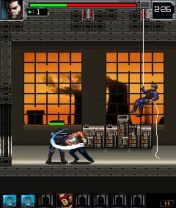 Okay, so the film hardly scaled the heights of 2009’s other major comic book film, The Dark Knight - in fact, it didn’t even reach the heights of the first two X-Men films - but this mobile tie-in showed that an uncommon level of care and consideration went into its construction.

Of course, what’s not uncommon is for EA to produce a solid action platformer, and that’s exactly what the publisher managed with Wolverine.

The game wisely skips much of the film’s scene-setting plot and cuts straight to the best action bits - that of old Wolves going mental and smashing the place up. What we have as a result is a straightforward but extremely entertaining action title. 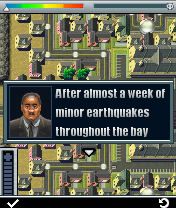 The film is a rather clichéd big budget disaster movie in which a clever scientist discovers that the world is doomed and thousands of people proceed to die at the hands of mean old mother nature for our entertainment.

The game, on the other hand, refuses to be pigeon-holed so easily. Eschewing the action scenario, 2012 puts you in charge of the weather itself as you attempt to guide destructive cyclones and firestorms out of the crumbling cities.

If you’re feeling vindictive, there’s even an alternative mode in which you can set out to destroy said cities with your newfound powers. Cue evil laughter. 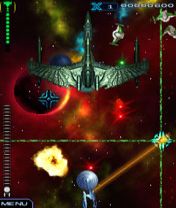 Hailed by many as a brilliantly successful revamp of the kitsch original, and by a few others (including me) as a bunch of over-hyped, appallingly scripted guff, there’s no doubting that Star Trek was one of last year’s box office success stories.

The mobile game wasn’t half bad either. EA decided to retain the all-action, all-inclusive tone of the film and create a 2D shooter that even casual gamers can pick up and enjoy.

The game takes care of the shooting for you, employing a generous auto-lock on that makes perfect sense in the Star Trek world. It’s up to you to navigate through the enemy swarms and tractor in any floating power-ups. It’s well worth beaming onto your phone. 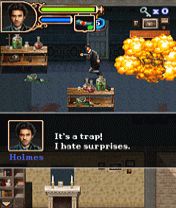 I haven’t seen Guy Ritchie’s take on the greatest fictional detective in the world, but I’m reliably informed that it’s decent. I’ll reserve judgement for the DVD release, but what I can be sure of is the quality of Gameloft’s mobile tie-in.

It’s the sort of slick, inventive scrolling action game that Gameloft made its own in 2009, but with the added weight of Arthur Conan Doyle’s creation behind it. You take the role of the famous sleuth and his sidekick Watson as you kick, punch, shoot, and solve your way through Victorian London.

Gameloft’s Shelock Holmes may not be the sharpest tool in the box, but it knows how to have a good time. 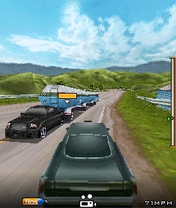 Curiously, the worst film represented on this list seems to make for the best game. The less said about Fast & Furious the film’s tired mix of souped up cars and cheesy lines the better, so we’ll instead speak about I-play and Firemint’s brilliant mobile racer.

Rather than simply flicking through a copy of Max Power for inspiration on a few ridiculously liveried cars and slapping them into a couple of recycled urban racing environments, the developer has worked hard to create a range of motorised challenges, from running massive petrol-carrying road trains to scoring the longest drifts around winding mountain tracks.

And what tracks they are, with a fantastically zippy 3D engine ensuring that Fast & Furious is just that.

Politician Iain Duncan Smith on violent video games: 'We are driving children to lose their childhood'

Survey: 49 per cent would play games on iSlate over DS or PSP