It's all over. Not only does Christmas have to wait a pleasing 351 days to surface once again, but a shiny, hopeful new year is upon us in the form of 2010.

2009 was certainly an interesting year, and one saw such a massive intake of Social Gaming. A staggering 73 million monthly users were clocked on Zynga's Farmville in December, according to appdata. Impressive to say the least.

What's in store for 2010? A larger emphasis on 'real' multiplayer in Facebook gaming. By that I mean actual interaction, not just the ability to view someone's farm or compare scores.

This year Pocket Gamer will be evolving its social gaming coverage into something more than just a roundup so keep your eyes peeled. I'm sure the excitement is unbearable.

When it comes to actual games coverage, we'll further broaden our horizons to show the more interesting games we find on our travels. There will also be a few stastics here and there if that floats your boat.

Developers: Don't hesitate to get in touch with anything to do with social gaming. You can reach the social gaming 'department' by emailing ben.griffin[at]steelmedia.co.uk, and as a result you may just see your game covered.

Anyway, I've held you long enough. Let's get the first show of 2010 on the road.

Now, I know this game isn't strictly new, but having been recently introduced to the crazy world of Crazy Planets, I just have to give this cool Facebook game a mention.

The best way to describe is if you imagine the gameplay of the Team17 classic Worms (albeit dumbed down a lot) combined with the bold, colourful graphics of Rolando. For the less clued-up, the idea is simple. You need to eliminate Robots on each level or planet.

You do this using a variety of different weapons, including standard grenades, laser guns and more. Exactly like Worms, the game is turn-based. You only have 30 seconds to decide how best to proceed, and should you take too long, the Robots gets their chance to retaliate with bazookas and whatever else they're packing.

My advice: find cover, point at your target, and shoot with whatever weapon floats your boat.

To keep things interesting, you can level up. This gives you a greater amount of health, and as a result you can then take on a larger number of Robots and make progress through the levels (of which there are quite a few). You can also upgrade every weapon available, as well as collect enough scrap to add yet more exotic weaponry to your arsenal.

The original Worms series was, frankly, awesome, and while Crazy Planet doesn't quite beat it for the amount of weapons available, the intelligence of the AI and the different game types on offer have kept me coming back for more - and remember, Crazy Planets is free to play, unlike Worms.

Aside from using scrap to boost your military muscle, you can use money to customise your home planet with different planet surfaces, items and more. A nice little personal touch and one that further enhances its 'coolness'. Another interesting touch is the ability to use a segment of your Facebook profile picture to stick on top of your alien friend. There's nothing finer than seeing yourself get blown up. (Quite - ed). A quick glance at the game's map reveals that multiplayer is 'coming soon'. Assuming it works, this could be a great deal of fun, and there would be a much larger incentive to level up your character. Still unsure? Check out the video above to see the game in action. 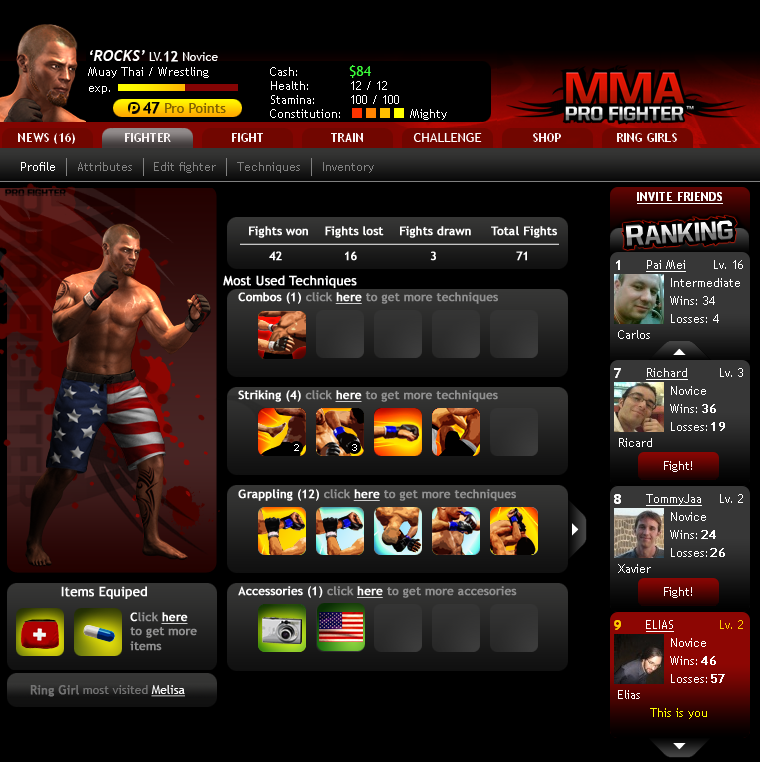 M.M.A. stands for 'Mixed Martial Arts', and it's exactly what you will be using to batter your friends, virtually speaking, should you give it a try. Which you probably should particularly if you are a fan of the sport, but also if you like the whole levelling-up malarkey. The nearest gameplay comparison would be Mafia Wars. You start off at level 1 and click your way through fights against other players to make money and gain experience (and hopefully notoriety).

This is where things start to differ from Mafia Wars. The money can be used to buy moves or enhance existing ones, thus improving your martial arts prowess.

How do you fight? If you're expecting something akin to Street Fighter, you may be disappointed. Think Championship Manager.

While it's not the most satisfying fight system, you feel more like the trainer as a result, and there's more than adequate depth before and after the fights, in terms of customisation and training, to help ease the pain from not being able to button bash to victory.

Your fighter can be made to look even more fierce, and there are many moves from each martial art included to bolster up his combat effectiveness, as well as the ability to train him. Sadly, it's another click affair, but it adds some variety.

MMA Pro Fighter is worth a gander for both M.M.A. and RPG fans alike.

Galacticos Football is 'the beautiful game', only without all the bad press and smashed-up super cars. Still, while it may not be as glamorous Galacticos Football captures the addictive nature of games like the aforementioned Championship Manager.

You choose from either an offensive or defensive team style, name your team, and off you go into the world of football. I decided to take on other total newbies to build funds.

Upon doing so, I was rewarded with reputation points which can be used for upgrades to your team, stadium, and so on, or more cash to buy those all important players via transfers.

The matches are played out at a fast speed, with goals appearing on screen as the 90 minutes fly by. Okay, so you're hardly watching a game, but it serves a purpose, and as you sink more effort into building a stronger team it's really quite satisfying to see your efforts paid off with 4-0 batterings.

Of course, there will always be bigger fish (one of my bosses would be one of these fish) which keeps things interesting, and if that wasn't enough you can also challenge teams for trophies as well as the ability to have friendly matches against friends.

Fans of football will no doubt enjoy the dream-team building aspect of Galacticos Football. Just don't forget the WAG and the mandatory, oversized 4x4.

* Ever fancied filling your loft with trains and track? Well now you can, only without the downside of losing all the storage space the roof presents you. TrainSetGo is a virtual train set game, and can be found on Facebook.
* According to appdata, Crowdstar (Happy Pets, Happy Island) is now the second biggest social game developer behind Zynga. I'm sure they are all Happy Employees.

Just in case you're interested: Courtesy of AppData, these are the top ten games in terms of monthly active users as of the 7th of January.

That's it for this week. Please feel free to email me with any ideas relating to this feature, and those of us from the UK - enjoy the snow.

The Escapist Bulletin: Why the Wii is the best thing to happen to gaming