Frankly we can't imagine Jackie Chan starting a crossword, let alone Bruce Lee finishing a word search, but what do we know about martial arts and paper-based puzzles?

Certainly our opinions aren't as forthright as Zoonami's Martin Hollis [pictured]. Like a tense fist chopping through several concrete blocks comes his response – "Sudoku needed some ninjas" – to our opening question, "So what was the spark of inspiration behind Zendoku?"

Of course, Hollis isn't a man who takes any prisoners. As well as working on excellent games such as GoldenEye and Perfect Dark on the N64, he also helped Nintendo develop the GameCube before finally setting up his own Zoonami studio in 2000. Zendoku will be the company's first release.

Why the long wait? "We've made a large number of game prototypes on a variety of platforms and learned a lot along the way, but unfortunately struggled to find development deals that were right for us," Hollis explains. 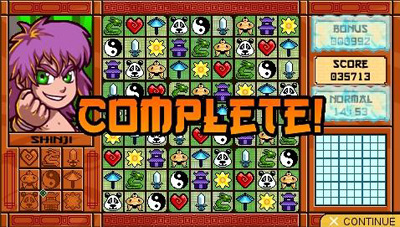 "With Zendoku, we didn't decide specifically to make a DS or a PSP game," he continues. "The important thing for us is to make a good game and choose the right platform for it."

"Zendoku is perfect for DS because it's a vibrant, colourful, fun Nintendo-style game. The sudoku gameplay is perfect for the stylus and the attacks are more fun on the DS with a stylus than without. Equally, we feel PSP definitely needs more fun, casual games that are pick-up-and-play, so we've developed another version of Zendoku especially for it."

As for the hybrid style of gameplay, Hollis refers to Zendoku as a frantic action puzzle battle game. "Every time you complete a row, column, or 3x3 box on the sudoku grid, you launch an attack on your opponent. You also launch an attack when you fill in all nine of one symbol," he enthuses.

Instead of matching numbers, the Zen part of Zendoku means this is a version of sudoku that uses colourful symbols. You also get to play as a variety of mad martial art characters, with graphics, themes and storylines to match. 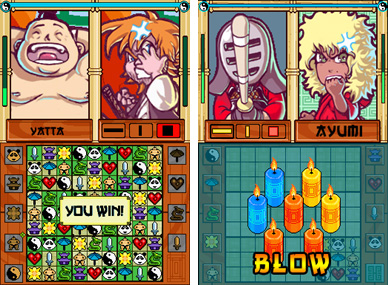 But back to those martial arts attacks. They're experienced as a sort of visual interference on your screen, which you have to clear before you can continue slotting symbols into gaps.

For example, in the DS version a bunch of mice might scurry across the grid and you have to blow into the microphone to make them run off. Or, the screen might become covered with cherry blossoms and you have to sweep them away with the stylus.

Continuing the battle theme, you'll be able to defend yourself from these attacks as well. Each of the playable characters has a lucky symbol, which if quickly placed on the grid will reflect the attack back to your opponent.

Of course, this refers to the head-to-head battle mode. When playing in the single-player time-attack Zen mode, placing your lucky symbol stops the clock for a short period of time.

It all sounds highly intriguing, and we'll looking forward to getting our hands on Zendoku for a proper test when it's released for DS and PSP on the April 20th. Click 'Track It!' to get an black-belted alert when our review goes live.

Opinion: Three reasons to be cheerful about the future of PSP

Battle against Zendoku's creators in Cambridge

Sudoku meets Bruce Lee in Zendoku for PSP and DS

Everything you need to know about Garena Free Fire's Wasteland Survivors rewards, the game's latest character, and how to unlock the Borderlands skin