Your iOS or Android Game of the Week - Arcane Legends

One of our jobs here at Pocket Gamer Towers is to sieve through the hundreds of apps that hit the App Store and Google Play every single day and unearth the diamonds in the rough.

We've now tallied up this week's votes - from comments on the site, tweets on Twitter, and votes in our Facebook poll - and the winner is: Arcane Legends (iPhone, iPad, Android). 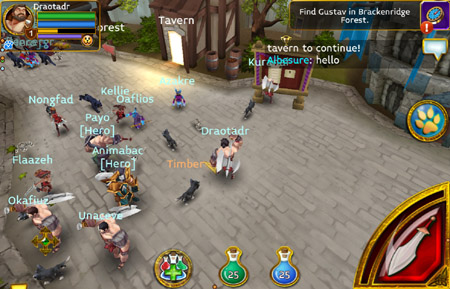 Having dealt with vampire lore in Dark Legends, and interstellar conflict in Star Legends, Spacetime Studios has taken its latest MMO back to a more traditional space: good old-fashioned fantasy.

Offering the player a trio of familiar character classes - warrior, mage, and rogue - Arcane Legends ticks all the classic RPG boxes, while bringing something a little newer to the mix.

You see, the fate of Arlor is dependent on not only the humanoid races, but the efforts of the animal kingdom.

This means that you'll be fighting alongside a selection of 'pets' - animal companions who assist you in combat, provide stat boosts, and generally look cute.

Pleasingly, our reviewer found that Arcane Legends works surprisingly well within the freemium model, so much so that it walked away with a Pocket Gamer Silver Award.

So, if you live to loot, and never enter a fight without a Yorkshire terrier at your side, then Arcane Legends could well be the MMO for you.