The streets of Victorian London are swathed with a thick fog. Gaslights bleed out little puddles of warmth as I stalk the alleyways, pilfering where I please and recruiting urchins to my gang of thieves.

Bribery, murder, and beatings are the tools of my trade. As well as wearing a real cool hood and turning children into criminals.

This is Antihero, a digital board game of robbery set in the cartoony end of the 19th century. And it's really rather good.

The game sees you creating your own thieves guild. You play a master thief, and via the medium of nicking stuff you need to force rival criminals out of your patch.

You've got a few moves every turn to collect gold and lanterns, then you use these to recruit thugs and urchins to aid you in your nefarious cause.

The world is covered in a fog of war to begin with, and you need to head out to scout the buildings and businesses you need to take control of the turf. 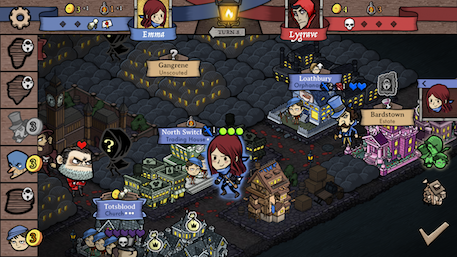 Houses can be burgled, but the key to winning lies in the other structures. Once you've broken into them, you can send urchins in to take control. Add enough urchins and you'll get extra bonuses to help you become the crimiest crime lord in the city.

Each level in the single player sees you competing against other dodgy types to try and full up your victory point bar first. You do this by assassinating locals, taking over churches, and bribing corrupt officials.

There's a deep strategy here, and the game is by no means child's play. It's pretty easy for a well laid plan to become an absolute disaster in the space of a few turns.

But there's a simplicity here that means it's easy to dust yourself off, learn from your mistakes, and get back in the game.

There are multiplayer modes too, and skirmishes that let you play quick games outside of the single player story. Everything is presented brilliantly, and there's a real warmth to all the robbing and murdering.

Antihero gets mobile board gaming in 2018 off to a really impressive start. It's fun, it's fast, and you're going to lose a good deal of time in its skullduggery and underhand activities.

A brilliantly well put together digital board game that ticks all of the right boxes
Next Up :
Evony: The King's Return review