Sure, the more common role-playing games and simulators out there will have you playing as mighty kings, powerful warlocks, or humanity’s last hope against zombies-and-or-nuclear wars - but have you ever considered running your own land as a plump but strong-willed piggy?

In Animal Farm, you get a chance at a complete do-over of George Orwell’s classic, where you can either follow the plot of the fable down to a T or create your own path. You can build an alternate universe where Snowball was still around or Napoleon didn’t rise to power. I had absolutely no expectations going into this game, but I’ve been extremely intrigued with the concept for the longest time. I had no idea what the gameplay would be, either - but thankfully, the moment I hit the “New Game” button, everything became a delightful surprise.

With the top-notch voiceover narrating the events as seasons come and go in the farm, you’re given the task to basically make choices - and they are so fluffing hard. To say that the decisions you have to make are tough as nails is the understatement of the year, as you will either be forced to let some animals die in favor of the others or fight for your lives when backed into a corner with no way out. Sometimes, you won’t have any other option but to let some of your beloved animal citizens run away just so you can save up on resources. Other times, you have to think about whether you want to put a sickly animal to work and gather more food for the storehouse, or let it rest and risk starving for the winter. 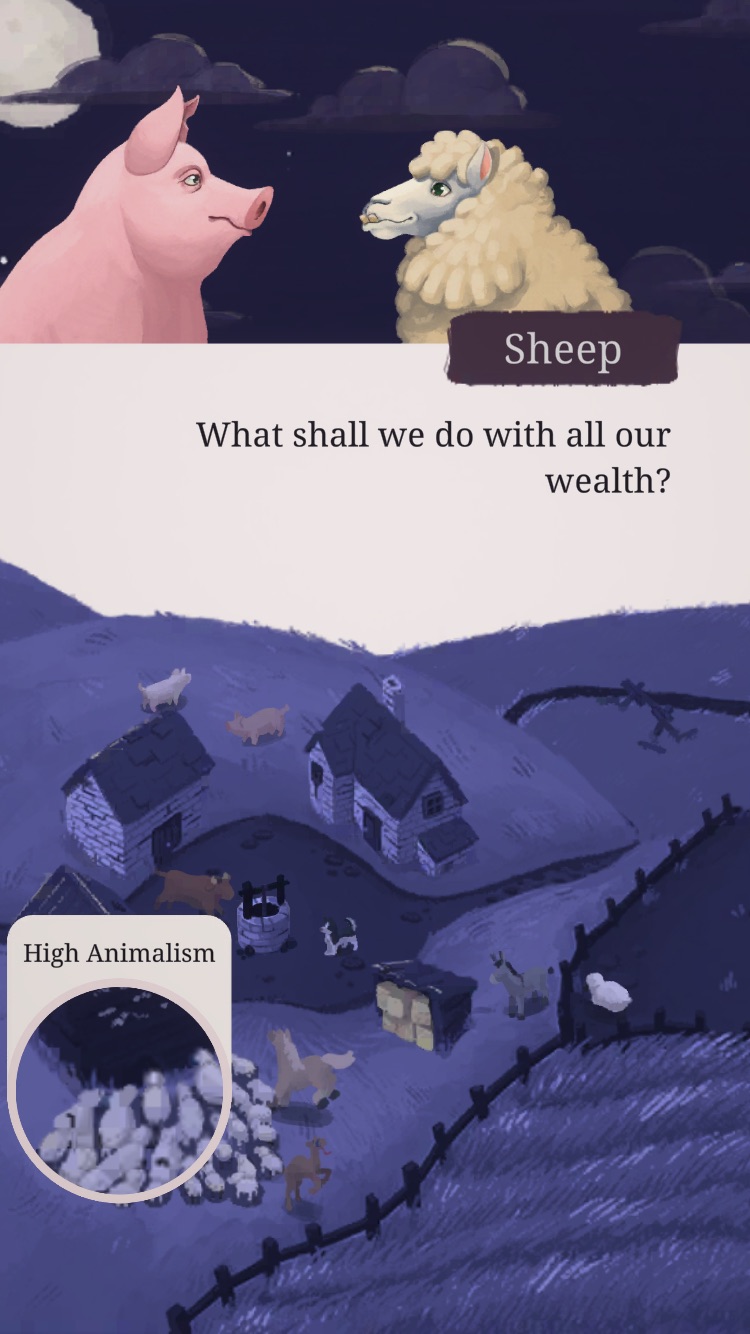 It doesn’t help that the other human farmers (Jones, the former owner of the farm, is out of the picture, of course) are either plotting against you or badmouthing you. You can either focus on building up your reputation or on fortifying your defenses just in case the humans decide to take back what they think is theirs.

Then there’s the fact that the animals all have their own hidden agenda for whatever they decide to do. The pigs, obviously, want to live above everyone else, but everyone else has their own issues you need to worry about, like the cunning rats stealing all the food and the lazy cat who can’t be seen anywhere when there’s work to be done.

The artwork is cute, colourful, and storybook-like - it’s definitely a complete contrast with the dark themes of the source material. Everything is pretty much static, and you only have to hover over certain action items to make your decisions. Each playthrough won’t last too long either - two hours, tops - as the game only ever really counts seven years as a “complete” run. You can definitely go farther than that, or you might not even reach seven years - each year has its own set of perils to face, so it’s easy to perish in, say, Year Five or even in Year One. But the thing is that even though each playthrough is short and sweet, you will want to repeat the game over and over again just to see if you can get all the different endings (and complete the “achievements” in your handbook). These objectives include anything from “Boxer’s Defection” to “Snowball’s Death”, and each one will make you curious to see just how things will play out on the farm if such events were to happen. 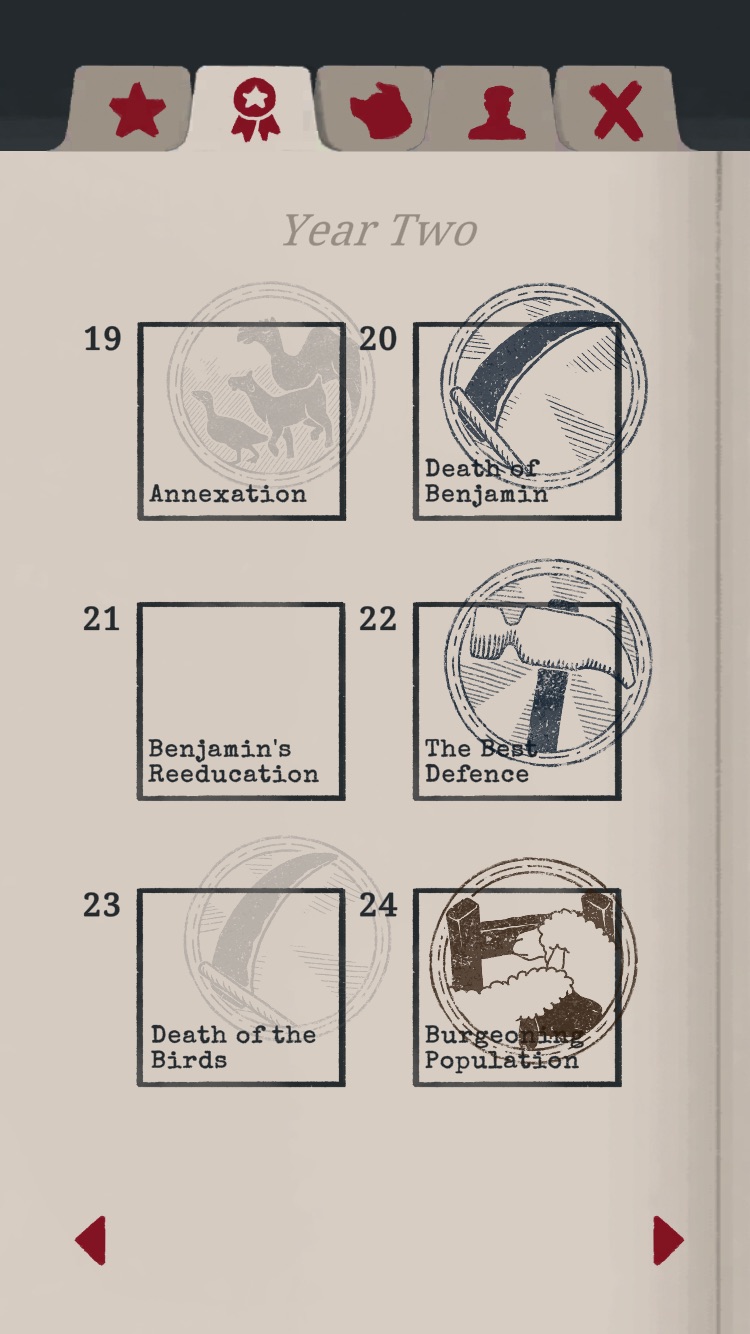 As for me, the obvious thing for me to do during my first playthrough was to get rid of Napoleon right away. I wanted to see if you really could change the course of history - and yes, it was satisfying. I sent Napoleon off to battle the first chance I got and he croaked. Of course, it wasn’t exactly a happy ending for the farm, because everyone died of starvation by Year Four. In my second playthrough, I built Snowball up way too much, but he ended up dying anyway and Squealer was left in charge. I made it through until Year Eight, because I focused way too much on the food and not enough on the farm’s defenses. On both times, I wanted so desperately to save Boxer, but couldn’t. I am not giving up.

I’m currently on my third playthrough, and I have no plans of stopping any time soon. 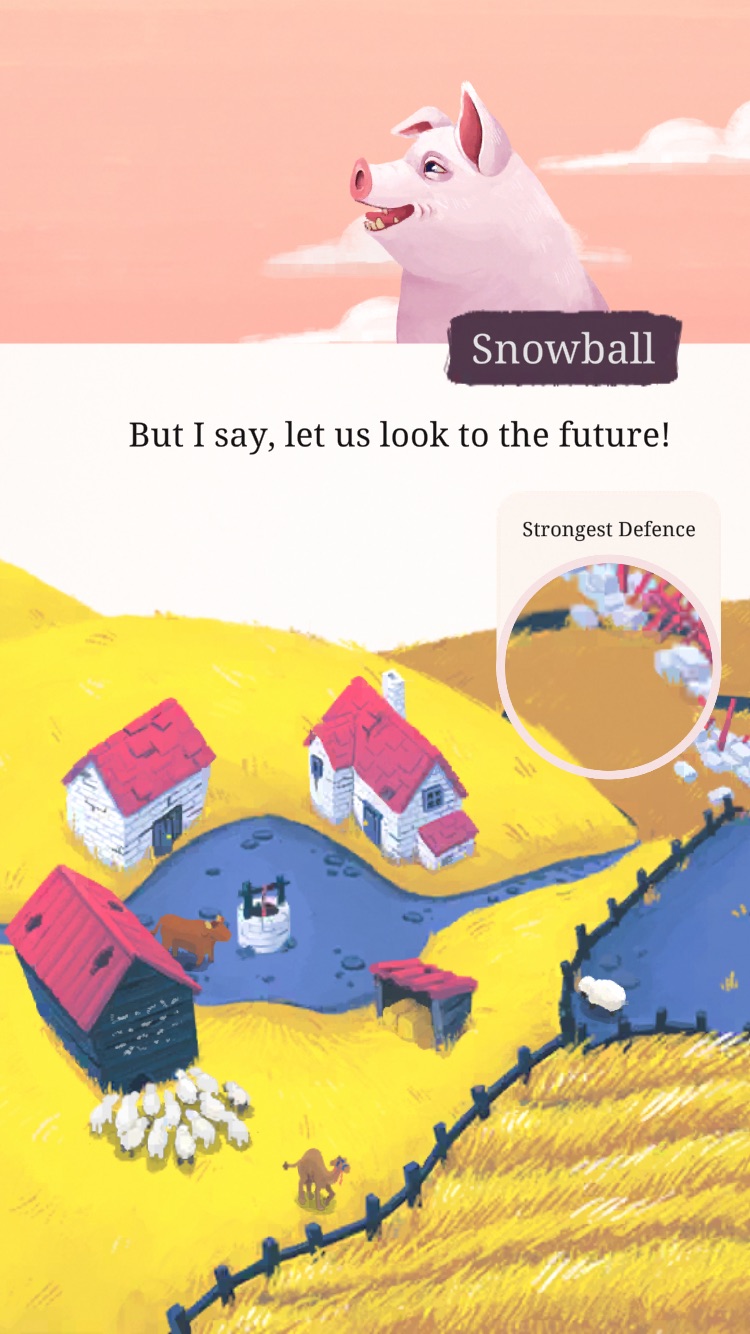 Overall, Animal Farm, while incredibly simple when it comes to mechanics, makes up for the value in replayability. There are just so many possibilities to explore, like me wanting Benjamin the Donkey to go away and then recruiting a camel from a traveling circus (I put Benjamin to work and he suddenly died the next day—hilarious). You need to make tough decisions on boosting productivity, maintaining a good reputation, fortifying defenses against humans, and keeping up morale in the farm in exciting new ways to get different endings, but at the end of the day, it just goes to show you how hard it is to lead anything. 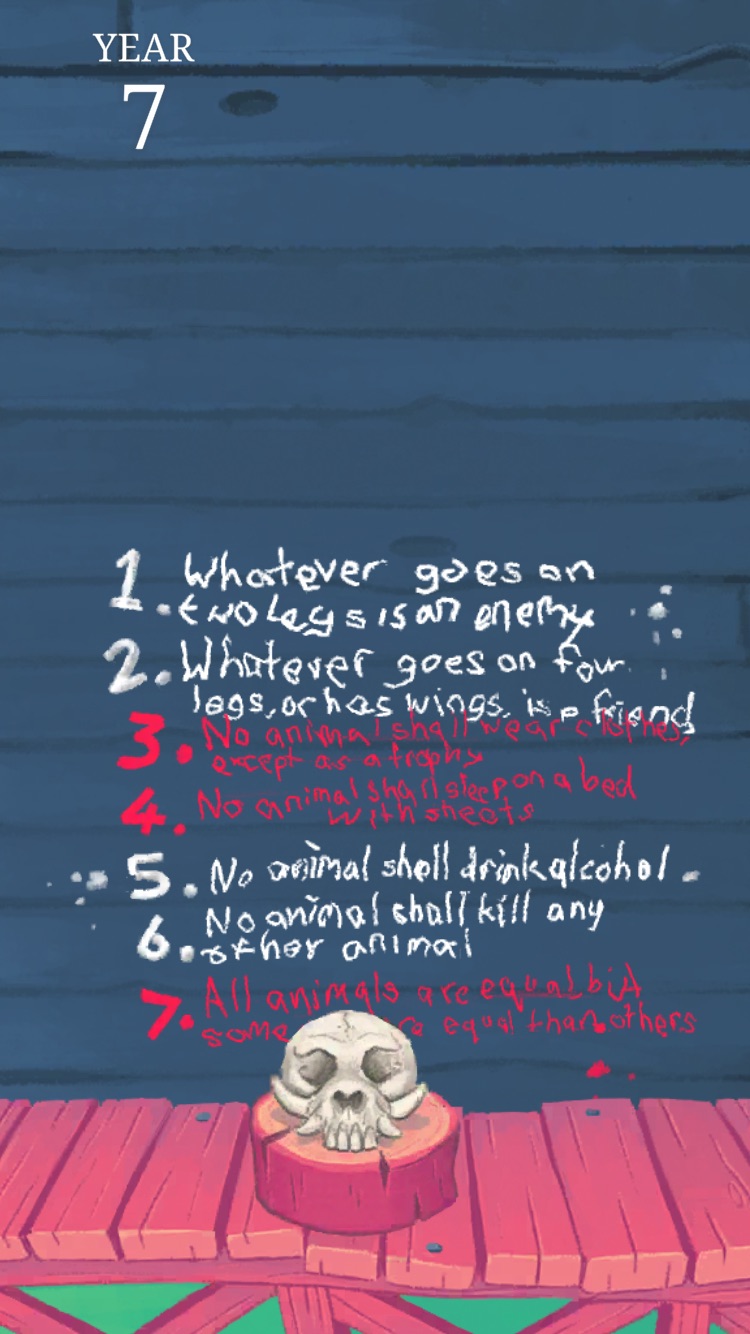 Plus, there’s a nice little nod to the book when you do certain things and, little by little, you can see that the Seven Laws of Animalism on the walls slowly start to get painted over with new amendments—because some animals are more equal than others, right?

Animal Farm stays true to George Orwell’s masterpiece but incorporates its own fun twist into the classic. I haven’t found out if I could end the game by drinking alcohol with the humans just yet as the book did, but I’d really like to see if the animals would look from pig to man and man to pig and not be able to tell the difference.
Next Up :
Evony: The King's Return review