iOS + Android
| Angry Birds ACTION!
Update on April 28 at 10:00: Rovio's latest title is now out of soft launched and released worldwide on both iOS and Android.

To celebrate, Rovio has made a short cinematic trailer:

Get in on the action! #AngryBirdsAction is out now - Download for free: https://t.co/F2em9N2Wzzhttps://t.co/jrjyCXsjrk — Angry Birds (@AngryBirds) April 28, 2016


To coincide with the release of its Angry Birds movie, Rovio is releasing Angry Birds ACTION! on mobile this Thursday.

Meant to be a new take on the bird flinging formula, it's actually more like pinball than anything else. You'll launch birds from a top down perspective to gather eggs and make it to the next screen.

We previewed it a while back when it was soft launched and we thought it was a pretty fun take on this universe. As it features the new design found in the movie, this release is not much of a surprise. 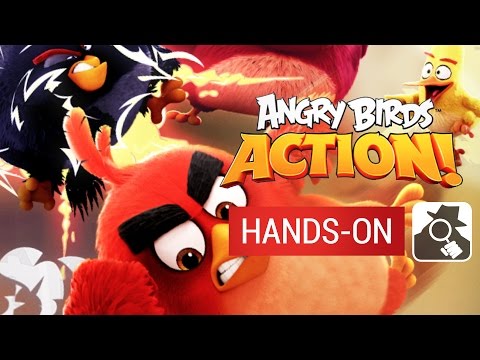 Subscribe to Pocket Gamer on
If you want to take a look at it right now, you can follow our guide to get the app from the New Zealand App Store.

For everyone else though, we'll update you when it's out worldwide.

How to save the eggs - 5 tips for Angry Birds Action!

Angry Birds ACTION! is a new soft-launched avian flinger with a twist, and we've got our grubby mitts on it