Amoebattle brings the microscopic fight to iOS, DSi, and 3DS

There's a new real-time strategy game in town, and it's packing a whole palette of colours.

Grab Games's Amoebattle is now available to download for iOS, and is due for release via the Nintendo 3DS eShop and DSiWare very soon.

In this RTS title, you control the Amoebas, at a time when they're under attack from another deadly lifeform.

By feeding your army, you can make them replicate and grow, and even mutate into new, stronger unit types. Special probe powers also allow you to change the flow of battle in your favour.

Amoebattle is one of the more colourful RTS games we've seen in a while, although that's not exactly difficult given the genre is full to the brim with greys, browns, slightly darker shades of grey, and the occasional light brown.

There's Retina display support for the new iPad and the iPhone 4S in the iOS version of Amoebattle, as well as iCloud integration for saving games and a whole host of achievements to unlock.

The game has already been released on the App Store for £2.99 / $4.99, with the 3DS / DSi version on the way very soon. Well, once Nintendo has got around to approving it.

Check out the trailer below to see it in action. 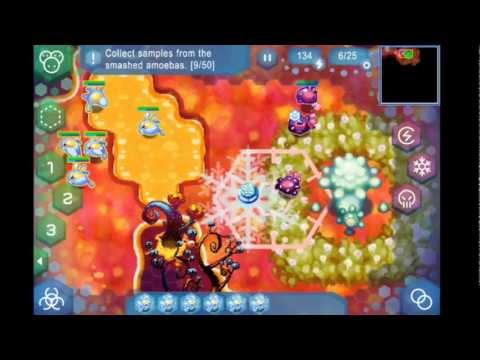 Subscribe to Pocket Gamer on
Next Up :
Charlotte's Table is celebrating Valentine's Day with an update featuring new stories, levels, and rewards