Lots of guns (and a trailer, too)

Sega has released a new batch of screenshots of its forthcoming alien shooting fest as a way of highlighting the variety of firepower you can expect to get your digital hands on while you're eradicating some of the universe's lifeforms.

As you might expect, the game's 16 weapons are either projectile, explosive, incendiary or energy based, and some are fairly obvious inclusions – the 10-Gauge Semi-Automatic High-Powered Shotgun, 2mm Heavy Repeater Chaingun, PB-1 Flamethrower, DX-1 Homing Missile Launcher, Xv-10 Proximity Detonating Mine Layer, X4-d 01 Quad-Trajectory Impulse Dispersion Laser Rifle, S19 Sonic Pulse Rifle, PB-2 Incendiary Plasma Firebolt Gun and PB-3 Incendiary Fragmenting Plasma Fireball Gun all come to mind. Where would you be without them?

Some, however, require a little more description. The PyroBlast Tech PB-4 Incendiary Geyser, for instance, envelops targets in columns of fire, while the 12mm Semi-automatic Magnetic Accelerator Rifle uses electromagnetic acceleration to launch bullets at lethal velocity in space and extraterrestrial atmospheres. Meanwhile, the BlastCorps Ti-E Isotope Gravity Dispenser is a demolitions weapon that shoots off explosive charges like artillery shells.

Sticking with explosives, the Xw-74 Quantum Ripper fires magnetically enclosed quantum singularities – high-powered electrical discharges to you and me. Similarly impressively named are the XS-d89 Supercharged Ionic Deflection Impulse Laser Assault Rifle, whose shots deflect off walls, and the Submicron Nanobot Swarm Launcher, which unleashes swarms of nanobots that then travel from target to target causing damage over time.

Still, as fans of previous versions of the old-time classic Alien Syndrome will tell you, all you really need is your trusty LazTech Industries X-d99 Impulse Laser – the standard issue Earth Command Forces assault rifle and classic weapon from the original game. 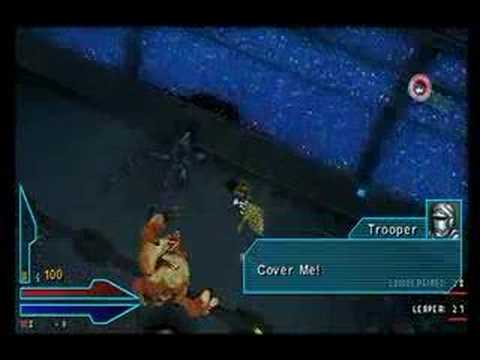 Good luck if you're one of them. From what we've seen of the game, players may want to learn to love some of the more powerful offerings if they plan on surviving the experience, which is expected to arrive on PSP this July.

Everything you wanted to know about Alien Syndrome PSP (part 2)

Everything you wanted to know about Alien Syndrome PSP (part 1)