Objection! Phoenix Wright trilogy has been delayed until early 2013

Capcom has told Pocket Gamer that its iOS courtroom drama trilogy Ace Attorney HD has been delayed, so it won't hit the App Store until early 2013.

The collection will include the first three games in this delectable Nintendo DS franchise. That's Phoenix Wright, Justice for All, and Trials and Tribulations.

They all star rookie lawyer Phoenix Wright, who is assigned to a non-stop cavalcade of murder cases.

So, he'll hunt through crime scenes for evidence, then head to court and try and get his client off the hook. 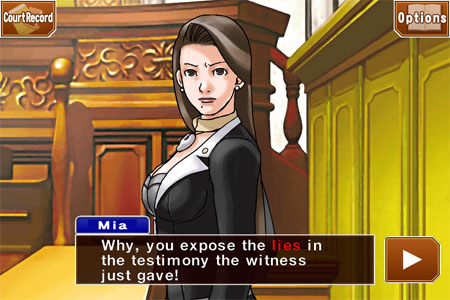 This often involves cross-examining witnesses; finding flaws and contradictions in their stories; and eventually discovering the real killer. It's a bit like Law & Order, only with a wicked sense of humour and an unmistakably Japanese twist.

In this iOS HD trilogy - which can be played in either landscape or portrait orientation - Capcom has used high-resolution original artwork.

This new iOS Phoenix Wright collection also sports a bonus feature called "Everyone Object!", where you can share your objections through email and Twitter.

The three-game pack is already out in Japan as a free app. You can buy extra chapters individually, or buy the lot for ¥1500 (about £12).

English-speaking gamers will sadly have to wait until the new year to get their mitts on the trilogy.