Warhammer 40,000 is a 30-year-old tabletop game starring a bunch of warring races in a dystopian sci-fi universe.

If you've skipped enthusiastically into this review expecting an accurate digital conversion or even a loving tribute, you're out of luck.

If you're not bothered about the franchise and are just after a satisfyingly meaty strategy game, you're out of luck as well.


Believe it or not, I'm in a reasonably good position here

Warhammer 40,000: Storm of Vengeance isn't the game of ultra-violent future-chess that some of you might have been hoping for. It's Plants vs Zombies in space, but without the charm or polish that suggests.

This is a fairly simple lane defence game, though you also have to carry the fight to the opposition. You start most rounds by buying the core units that churn out your troops, as well as the resource-gathering units that fund such production.

Once your grunts start spawning, you drag them onto a lane, where they'll begin their trudge towards the opposing side. They'll head straight to the opposing base and start hammering away at it, but if they encounter an enemy unit along the way they'll engage it.

Most of this combat is automated and contextual. Your units will let off the odd burst of projectile fire as they close the gap on their opponents - as well as enemies in adjacent lanes, which is a neat touch - and pull out melee weapons when up close.


Down on one knee, ready to propose among the rose petals, Terrence wondered if he'd blown it with the setting

Whether you choose to play as the marines or the orks, the units under your command belong to three basic classes. There's your standard grunt, adept at long and short range. There's your heavy weapons guy who moves slowly, but can hit hard from distance. Then there's your melee specialist who does most of his damage face-to-face.

The real variation comes when you start purchasing additional abilities, such as the commander abilities that help inspire surrounding troops, or the melee class's ability to rocket over to another lane.

Ultimately, though, your options are somewhat constrained by the compact nature of the battles, and the pressures placed on you by finite resources and your opponent's actions. This is the same in any strategy game, of course, but many will come here expecting tactical scope only to find enforced tank rush tactics. 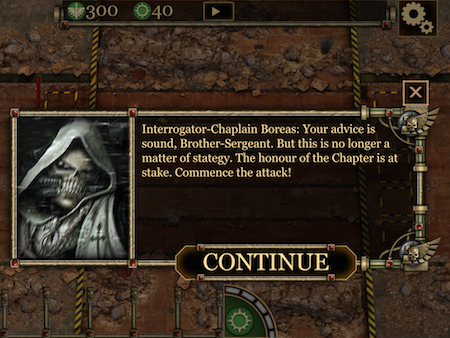 Strategy: the art of formulating a plan based on statistics. Possibly

The game tries to offer interesting alternatives, such as the aforementioned special abilities. There are more that involve putting your unit spawners into a special 'charge mode', which enables the creation of special units.

The ability to store units like a deck of cards for later use also adds to the strategy, as you can build up your reserves to cover you while you switch to the aforementioned special charge mode.

But, ultimately, the game is a fairly simplistic, repetitive war of attrition in keeping with the way the troops move - straight ahead, regardless of what's happening to either side of them.

Add in a story that's either generically future-grim on the human side, or in tiresomely 'comical' ork-speak on the other, and you have a game that's a bit of a grind to play for more than an hour or so.

A disappointingly limited lane-defence game that offers little of the strategic depth fans of the source material would be hoping for, and nothing outstandingly fresh for the rest
Next Up :
Hindsight review - "Deeply emotional but a tad repetitive"

Out at midnight - Warhammer 40,000: Storm of Vengeance is a stormy and vengeful lane-based strategy title for iOS

Warhammer 40,000: Storm of Vengeance pushed back to April 3rd on iOS

Time to bulk up for Warhammer 40,000: Storm of Vengeance's trailer

Warhammer 40,000: Storm of Vengeance will blast onto iOS and Android on March 27th

Check out some new images from Warhammer 40,000: Storm of Vengeance