[Update] Out at midnight: Build a transportation empire in Transport Tycoon for iPhone and iPad

Moving people [Out now for iOS and Android]

Secondly, Android players will be glad to hear that Transport Tycoon is available on Google Play [buy] at £4.99, too.

If you're waiting for our verdict on Transport Tycoon before spending your fiver, we'll have our review up for you soon.

Have you ever wanted to run the transport infrastructure of a small town but just haven't been able to find the time of late?

That's because Transport Tycoon has just surfaced on the New Zealand App Store, meaning it should be available in the UK and US at midnight tonight.

The game is a hugely complex simulator in which you're put in charge of a burgeoning transport empire. You need to plan routes, buy vehicles, and make as much money as you can. 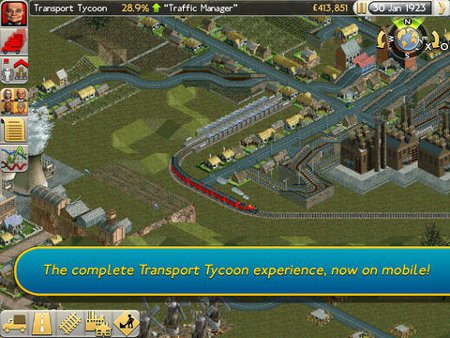 It's not just a case of building roads, mind. You need to build depots, bus stops, and set the various points along the route you want your vehicles to stop and pick up people, goods, or equipment.

If you like your games to have more menus than you can shake a stick at, then Transport Tycoon is going to be right up your well-designed alley.

Start your transportation empire for free with Transport Tycoon Lite

5 sim games we want to see on iOS and Android