There are so many games on the App Store that the reviewer's task can boil down to compare and contrast. Too often, the required conclusion is, how does it measure up to the current genre leader?

This approach makes some sense, of course.

We're all constrained, either by cash or time, and want to make the most of both. But it leaves little opportunity for reviewer, or player, to slow down and smell the flowers.

However, if you demand such a stark context, Tiny Lights isn't worth your while.

The first part of a potentially multi-episodic game, which is perhaps loosely inspired by the likes of The Legend of Zelda, ico, and perhaps Final Fantasy, it frequently demonstrates limitations all its own.

Yet, despite its one hour playtime, the straightforward exploration, and the hardly challenging combat and puzzles, if you're prepared to roll with it and just enjoy the scenery it also has charms all its own.

The tiny lights of the title are five coloured characters, one of which you control - point-and-click style - as you explore the dark woods, trying to recover your village's pillar, which was stolen by the light eaters. They're pale faced, black clad entities who will suck the light out of your tiny lights if you let them.

Only the green Brave can destroy them, with his bow. As you gain access to them, you'll be switching between the five tiny lights to make use of their attributes: Alpha's collection of hidden coins; Social's ability to talk to people; Link's teleportation; and Mystic's magic door opening.

None of this is particularly taxing. For example, there's a map which clearly shows you how to make your way through the forest, collecting coins, moving blocks, conquering short mazes, unlocking teleports, and killing occasional light eaters as you go.

Yet the journey is worthwhile. From the game's pastelly cartoon graphics to the subtly different animations of the characters and comforting audio, if you accept the story and are happy to overlook the game's limitations it's an enjoyable ride.

One example is the coin-carrying limit. When you've collected 30 coins, you're supposed to go back to the village hub to deposit them in the bank, so you can collect another 30, and so on.

Not that you use coins for anything important - they just aesthetically improve your village. The journey there and back again can take a couple of minutes.

You might think this inconvenience would compel you to stop collecting coins, but these back-and-forths are worth it for the time you get to spend wandering around and immersing you further into the world, which - after all - is what these adventure experiences are about.

So, while not a game for everyone, and despite being the first slice of a planned series unlikely to be completed, for those with the time and the inclination Tiny Lights is enjoyable beyond the sum of its parts. 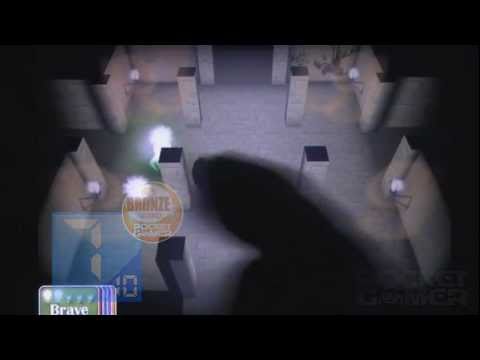 In many ways a lightweight exploration game, nevertheless Tiny Lights' demonstrates a certain charm that's a joy to play
Next Up :
Streets of Rage 4 mobile review - "Worth the twenty-seven-year wait"