There are some games that exceed our expectations on any platform, and Thimbleweed Park is one of them.

It's a point-and-click puzzler with an entirely nostalgic feel to it, and though it's asking quite a high price on the App Store (£9.99 / $9.99) I can't say you won't get your money's worth.

This town ain't big enough for the two of us

You start off playing as the victim of the game, or 'the body pixelating under the bridge' as he's called.

This serves as a tutorial of sorts as you learn to talk to a drunken man, open a gate, check your 'to do' list, and then nip over to a shady part of town and get murdered.

What's interesting off the bat is that the controls are pretty complicated. This time around you've got nine ways to interact with the world around you, including pushing, pulling, using, and talking. You get the idea.

Quickly, the scene shifts to however long afterwards and the X-Files-like Agent Ray and Junior Agent Reyes arrive on the scene to fully start the game. 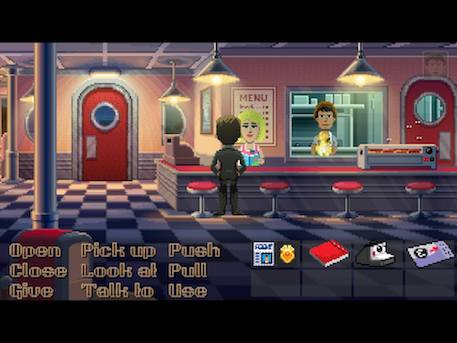 Every character has a place in the story and that's not apparent straight away. It takes a little while for you to fully ease into the game as it plants questions into your head like 'how are these guys going to be related to this situation?'

But, in a town like Thimbleweed Park anything can happen. And that's the magic of it.

Mechanically Thimbleweed Park works like a dream. Thanks to the selection of actions you can easily combine things in your inventory, chat to people you meet, and interact with objects as you go along.

However, if you don't want to bother with all of that extra work you can always double-tap on items to perform the default action. But, where's the fun in that?

Double-tapping also lets your character follow your finger, which comes in useful when you need to move longer distances.

The sound in this game is brilliant, from its environmental audio to the voiceover acting. Everything is very clear and effective, and really puts you in the place and time.

It's refreshing that almost everything has an appropriate action. For example, when you're first introduced to Ransom the clown you walk around the circus grounds for a reason I won't spoil.

After passing by a mime on stilts several times my fingers got a little itchy, and I ended up pressing the 'Push' button before selecting the mime. Sure enough the mime toppled over and hilarity ensued with tears and curse words galore.

Another cool factor is that there's quite a difference between the two difficulties in-game. One allows for a more casual experience with puzzles that are pretty straight forward, and the other really goes to town with its complexity.

If you're choosing, I'd suggest you go hardcore. It's the best way to play. 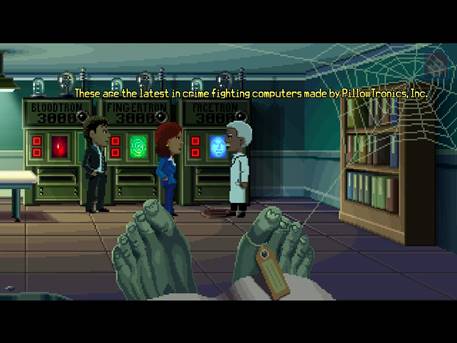 There is one gripe with the game on mobile and that's sizing. Playing on iPad, the visuals are all very clear, but when choosing from a selection of answers the text is so squished together that it's easy to choose something else by accident.

I expect mobile phone-users will likely have a similar experience on their chosen device.

Five of us? Well, alright then

It's hard not to go on and on about what makes Thimbleweed Park a triumph on almost every level. From a complex narrative to bursts of hilarious dialogue, utterly head-scratching puzzles, decent hint systems if you do get stuck, and much more.

This is a homage to classic point-and-click puzzlers without completely reverting back to the LucasArts days. It pulls in current pop-culture references, cheeky fourth-wall breaking, and more that'll make you nod your head approvingly.

Oh, and when you head into settings it lets you select 'Toilet Paper Over' which corrects the position of all of the toilet paper you come across.

It may look like a normal point-and-click puzzler but Thimbleweed Park is complex, classic, hilarious, and will have you coming back for more
Next Up :
Alien: Isolation review - "Chestbursting fun in the palm of your hand"