iOS + Android
| The Procession to Calvary

Yesterday we reported that Joe Richardson's point and click adventure game The Procession to Cavalry had initially been rejected by the App Store. Today we're pleased to report that Richardson's appeal was successful and the game is now available for both iOS and Android.

Described as a spiritual successor to Richardson's previous game Four Last Things, The Procession to Calvary is a Monty Python-inspired adventure game that's made up of Renaissance period paintings. Richardson himself describes it as being 'kind of like if Monkey Island 2 had been made in 17th century Florence by a time-travelling Terry Gilliam wannabe.' 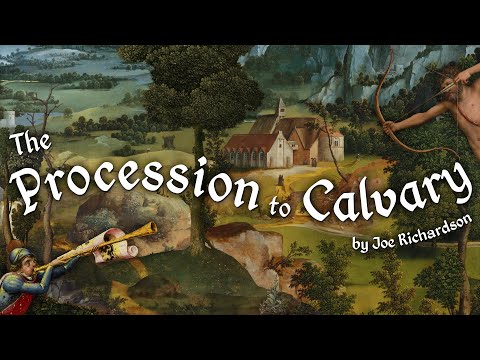 The game kicks off following the end of the holy war, the oppressors have been defeated and the churches of the Old God have been destroyed. There's just one loose end that still needs tying up. The tyrant known as Heavenly Peter is still and large and it'll be your job to find him.

The story will take you through a world that's been created by a series of Renaissance paintings, which gives the game a very distinctive look. During your mission to find Heavenly Peter, you'll engage in a series of weird and wonderful activities.

This might involve something as ambitious as stealing an entire ship or something as simple as feeding a donkey or poking some chap in the face. There will also be an opportunity to take part in a talent contest and assisting a street magician with very little in the way of magical prowess.

The Procession to Cavalry is available now over on the App Store and Google Play. It's a premium game that costs $3.99.

Looking for other point and click adventure games to play on your phone? Here are 25 of the best available for iPhone and iPad
Next Up :
Mission Zero drops three new character trailers ahead of technical test