The gods are rebelling. There's a big axe in your hand. You know what to do

When you think of warring gods, it's almost impossible to stop the name Kratos from hacking its way through your grey matter to the front of your mind.

In Chillingo's newest action-adventure title, The Gods: Rebellion, the prolific publisher is keen to show iOS gamers, however, that Chinese deities can be just as petty and violent as their Greek counterparts.

The Gods: Rebellion is a top-down hack-'em-up. In it, you are cast as a lone human warrior who must save the world from a bunch of squabbling gods. 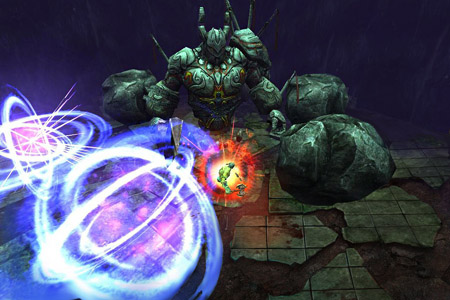 As we have learned from God of War - to which The Gods: Rebellion owes a considerable debt - the best way to defeat a cheesed-off deity is to rend it limb from divine limb with bits of sharpened steel.

To this end, you'll have access to a chunky-looking pair of flaming axes. Lucky, eh. These axes should prove just the job for bringing the gods to their knees (and then chopping off their knees).

The Gods: Rebellion developer Calvi has included a seven-level campaign for you to carve through, plus a host of character upgrades to unlock and exploit. There's also a challenge mode, designed to entertain veterans via its 11 levels of blade-blunting combat.

Chillingo has confirmed that The Gods: Rebellion will hit the App Store at midnight on Wednesday.