It's been a long time coming, but it's nearly here: Temple Run 2 will sprint onto the App Store at midnight tonight.

In addition to the new settings, the franchise's visuals have been given a significant touch-up, making Temple Run 2 an altogether prettier proposition than its genre-defining forerunner.

There'll be some new playable characters, too, with screenshots revealing at least three fresh faces (well, sweaty backs), including a female archaeologist-type and a dude sporting a snazzy red gilet.

These characters will be able to use "special powers", though we're not sure what those powers are yet. Something to do with running fast, we'd wager.

We've already spotted Temple Run 2's creators having a crack at it over on Game Center, and can report that the game contains the same three global leaderboards (high score, coins collected, and distance run) as Temple Run. 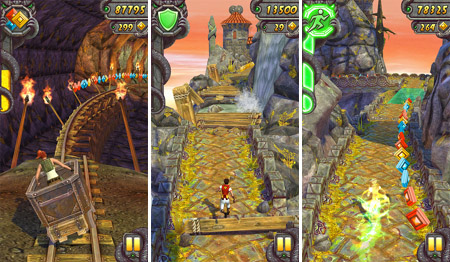 You will be able to download Temple Run 2 for free on iPhone and iPad from midnight tonight.