Benoît Sokal's 2002 adventure game Syberia is now available to download on iPhone and iPad in Canada, and it should surface on international App Stores soon.

In this game, you follow the story of Kate Walker, an American lawyer who is sent to a remote French village in order to finalise the takeover of a toy factory. But upon arriving at the village, Kate learns that the factory's owner has just died.

This catapults her into a puzzle-filled adventure across Central and Eastern Europe, featuring strange mechanical devices, steampunk vehicles, and woolly mammoths (which are alive and totally not extinct, apparently).

I never played Syberia, but it seems to be a popular point-and-click adventure. Upon the game's release a decade ago, Adventure Gamers called it "a thoroughly enjoyable game," and said "Syberia deserves to be in every gamers' [sic] collection, adventure or otherwise". 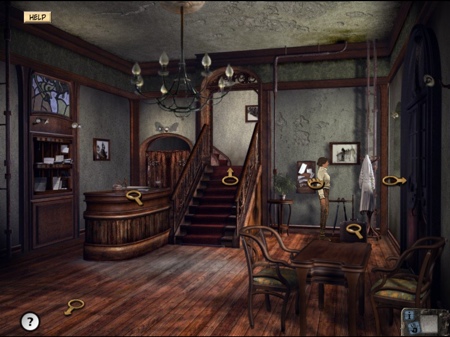 For this iOS version, publisher Big Fish Games has split the game into three parts (though only the first third of the game is available now). You can grab it as a free demo, but you'll need to pay a £2.99 / $4.99 in-app purchase to get the rest of the game.

If you were wondering, yes, this iOS version has full voice acting. Furthermore, it's been optimised for the touchscreen, so all possible points of interaction are shown on-screen as tappable icons.

We've put in a call to Big Fish Games to find out when Syberia will be available for iOS users outside of Canada. We'll let you know what we hear back.

More pointing and clicking comes to DS courtesy of Syberia