The very best games will change the way you look at the world, whether it's searching out sniper holes on the walk to work or taking the racing line when you're pushing a trolley around the super market.

Super Stickman Golf 2 almost manages to pull off that feat, and you'll find yourself scowling at hills and stairs for a little while after you've finished playing. But it's marred by occasional difficulty spikes and courses that reduce you to babbling fits of frustration.

That's not to say there isn't fun to be had in Super Stickman Golf 2's simple golfing gameplay - far from it. This is as entertaining a game as its predecessor, Super Stickman Golf, with a solid if not astounding single-player mode paired up with a riotous multiplayer experience.

The controls are all but perfect. Two arrows let you change the direction in which you're going to be hitting your golf ball, and a large button marked 'go!' starts a power bar swinging when you tap it. Tap it again when the meter is in the right place and your stickman golfer will take the shot.

Earlier levels stray to the saner edge of the golf spectrum, and can feel a little underwhelming, but once you've completed a couple of courses you'll find Super Stickman Golf 2 spreading its crazy wings.

Pink goo acts as glue that your ball can stick to, moving platforms attempt to block your shots, and cavernous pits wait to gobble up misplaced shots. There are courses based entirely on portal technology as well, which are a particular highlight.

There are plenty of cosmetic changes to buy, letting you kit out your golfer with different outfits and new hats. It adds to the zany theme that runs through the bones of the game.

For some, that whackiness is going to be too much. Others might find some of the drearier levels too off-putting to keep going, which is a shame because there are some real gems here.

Still, throw in a frantic race based four-player mode that you can play through Game Center or local wi-fi, as well as a turn-based multiplayer game, and 20 single-player courses, and you're left with a fantastic package.

Super Stickman Golf 2 might not quite make it into the big leagues, but it's still an enjoyable and engaging puzzling sports title, so long as you don't mind the odd bout of frustration. 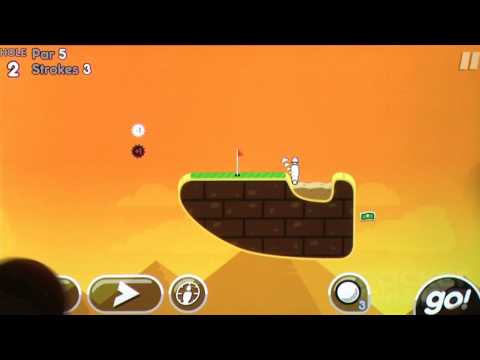 A polished and well-presented game, Super Stickman Golf 2 doesn't always get its angles right. When it does, though, it's an awful lot of fun
Next Up :
Hero Emblems II review - "Lovely visuals and music, but match-3 combat lacks strategic depth"

The 10 best golf games for Android phones and tablets

Bronze Award-winning Super Stickman Golf 2 will get a massive update, drop price to free, this Thursday