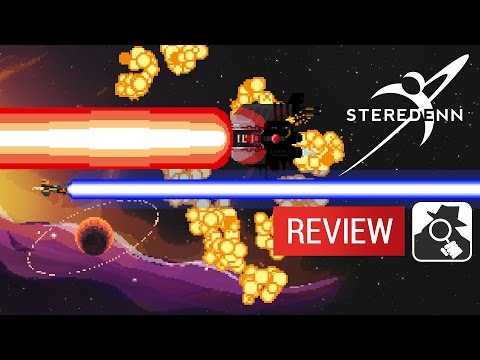 Subscribe to Pocket Gamer on
If there's one thing more exciting in a shmup than evading storms of bullets, it's returning bullets, lasers, and missiles of your own.

Steredenn offers the former, but it also delivers just as effectively on the latter, combining bullet hell shooter with roguelike and letting you create your own weapon combinations through pick-ups and perks.

All action, no filler

Space pirates have decimated your fleet and they're approaching in growing waves. Destroy them all.

Steredenn has no time for story; after the tutorial, tapping play drops you into battle against randomly generate waves of pirate vessels, mixing up environmental hazards and enemy patterns to keep you on your toes.

Given its roguelike DNA, there are no persistent elements in Steredenn, and the threat of permadeath looms over every bullet dodged.

Health is only refilled by defeating a boss, and every defeat returns you back to the outskirts of Earth, ready to fight through the pirate hordes once more. 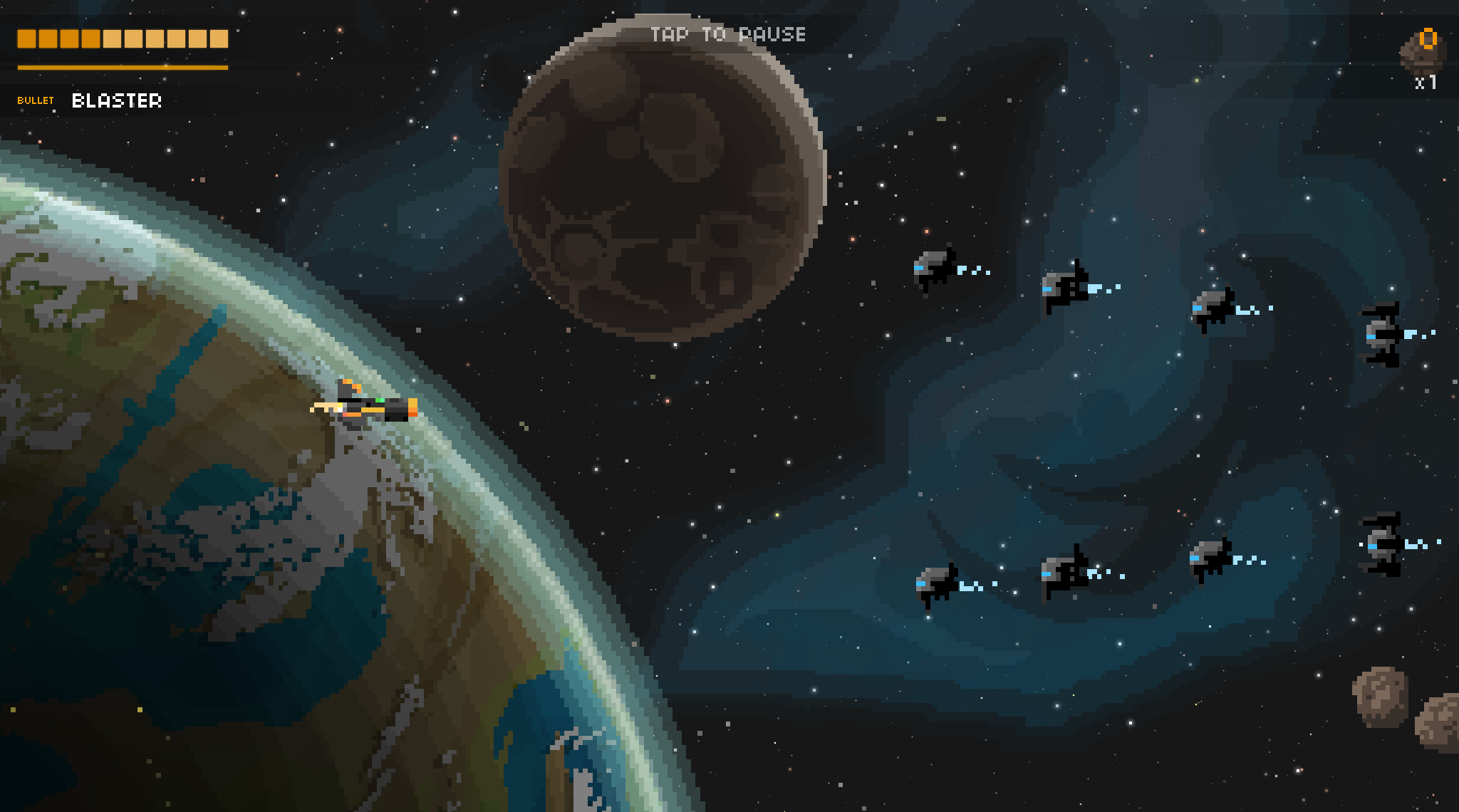 Thankfully, Steredenn's gameplay and controls are so finely tuned that restarting feels like another attempt to refine your skills rather than a punishment.

Relative touch for movement, and swipes and taps for shooting and switching weapons, lets you attack and out-move with ease.

You'll need to be agile to overcome Steredenn's relentless challenge, derived from its diverse enemies and random stage modifiers such as meteor storms and laser barrages.

Daily Challenges and the boss Arena are even greater tests of your bullet hell prowess.

All that chaos is presented through a vivid pixel-art aesthetic, where massive explosions fill the screen and you fly past capital ship graveyards, vibrant nebulas, and flaring suns.

But even the most skilled pilots can't survive through evasion alone, and Steredenn gives you an impressive arsenal to equip.

While your starting blaster is surprisingly effective, you'll soon be freeing new weapon pick-ups by destroying enemy shops, letting you swap out out the blaster and equip a second weapon.

Do you turn into a melee master with the saw blade and sword, or bullet-cancelling lightsaber? Or maybe you'll pick the flame thrower-esque stasisgun, or the charging shockwave?

Perhaps you'll go for the focused range of the shotgun or massive spread of the supergun? Should you choose the auto-targeting cannon or get some drone companions?

Every weapon feels different, has its use and effectiveness against various enemies, and can be mixed-and-matched to create powerful combos. Encountering a new weapon is one of Steredenn's consistent thrills. 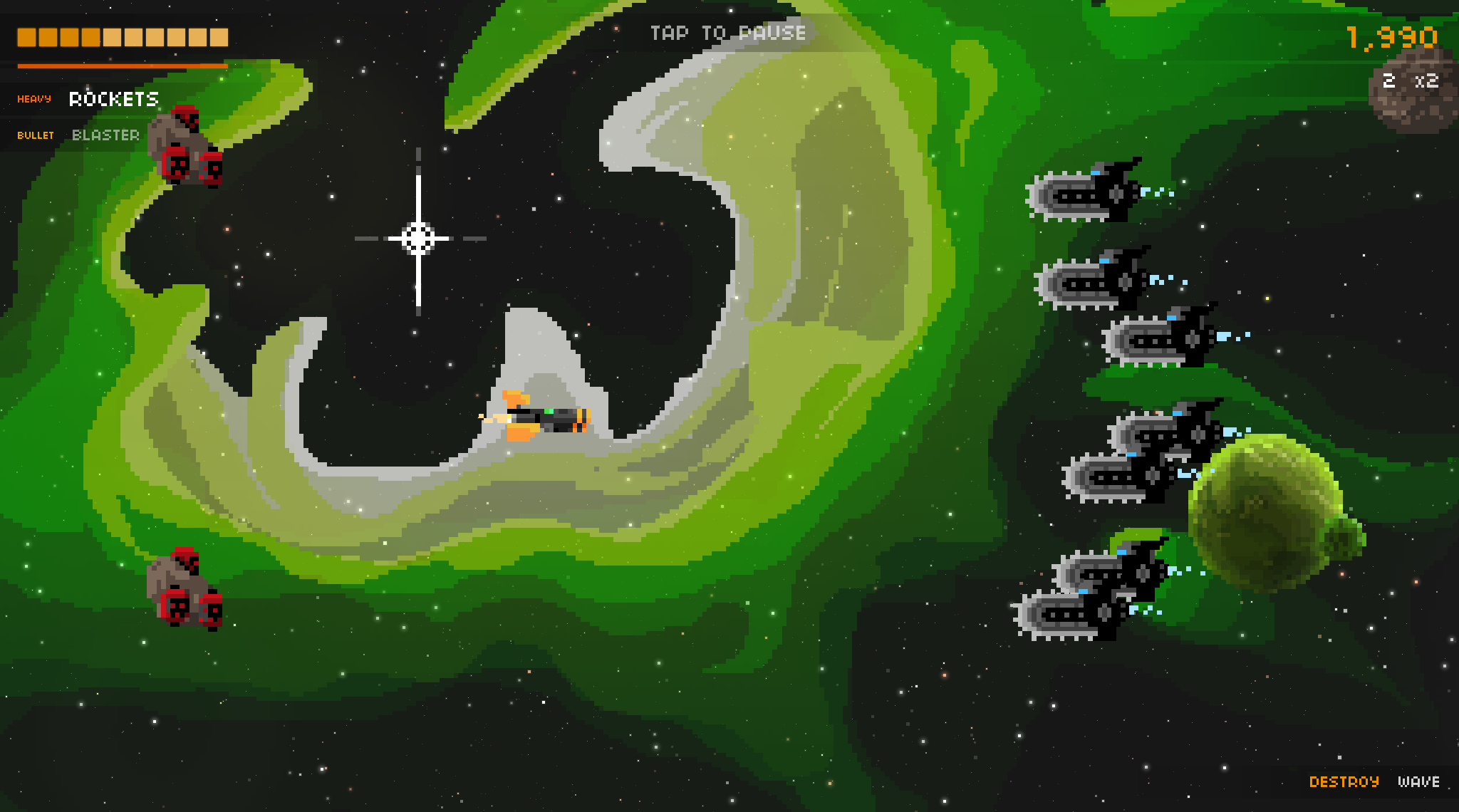 Defeating a boss lets you choose from various perks, stat buffs, and modifiers that can, amongst other things, upgrade your damage, grant you a shield that recharges while you're not firing, or increase the health of your drones.

Combining perks with your choice of weapons imbues Steredenn with that roguelike feeling of tactical improvisation, letting you develop builds based on the random pick-ups you've gotten that run.

You'll need to carefully think of those weapon synergies to survive the overwhelming difficulty of the later stages.

Of course, that means the usual roguelike issue of RNG can result in less-than-optimal combinations of weapons, or defeating a boss to find perks that might not be that useful for the weapon you have.

But even when the odds are against you, Steredenn just might find a way to keep you hooked and ready to jump right back in after dying, through its frenetic combat, expansive arsenal, and solid touch controls.

Steredenn's polish, variety, and thrilling bullet hell makes it a must-play for shmup fans
Next Up :
Automatoys review - "Tactile fun from days long past"

Steredenn: Binary Edition is an indie you need to add to your Nintendo Switch library