Incomplete is your training

Star Wars: Force Arena is out now in iOS, allowing you to engage in some lane-running MOBA action with Han Solo or Princess Leia as your hero (to name but two).

We've all been playing it a bunch during this first day of availability, and if you've played a MOBA before it'll all make perfect sense.

Of course, if you haven't played a MOBA before, you're probably really confused right now - even with the game's fine tutorial section, it can take time to get into the genre's rhythm. Judging from my crushingly easy early multiplayer victories (and believe me, I'm nothing but a MOBA tourist), that's quite a lot of Padawans needing some Yoda-like guidance.

Here are some quick beginner's tips to give you a force-push in the right direction. 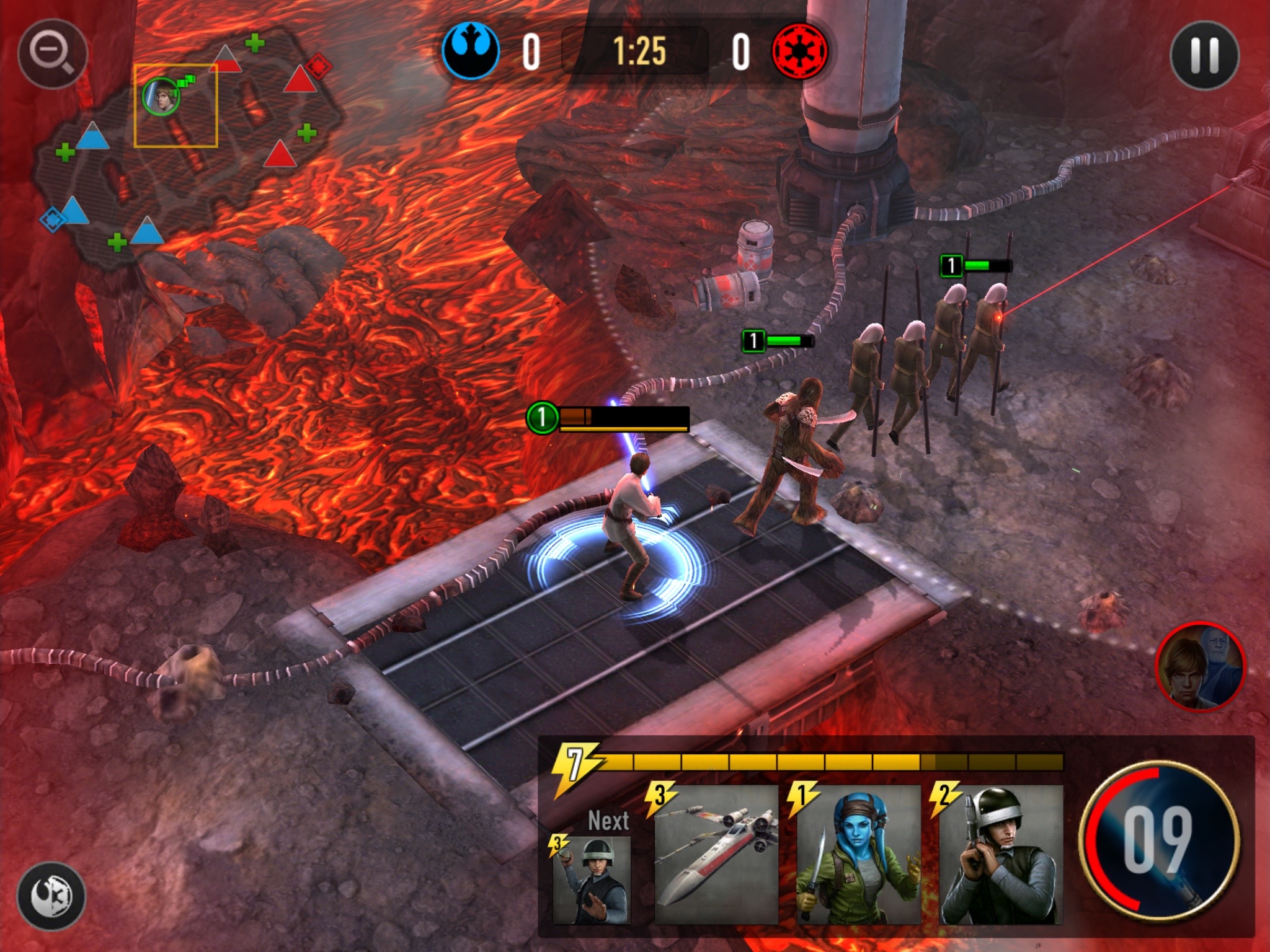 You only take direct control of your hero in Star Wars: Force Arena, and it's by far the most powerful unit in the game (aside from your opposing number). However, if you just run in to the opponent's territory gung-ho, you'll die alarmingly quickly.

What you need to do is stop your hero short of the 'ring of effect' of enemy turrets and call forth some automated allied troops. As is the case in pretty much every MOBA, these stooges aren't primarily there for their firepower, but more for their ability to take enemy fire while you sneak in for the kill.

The same is true of engaging enemy heroes - if they have a bunch of their own troops, don't engage until you have similar backup.

Don't be afraid to run and heal 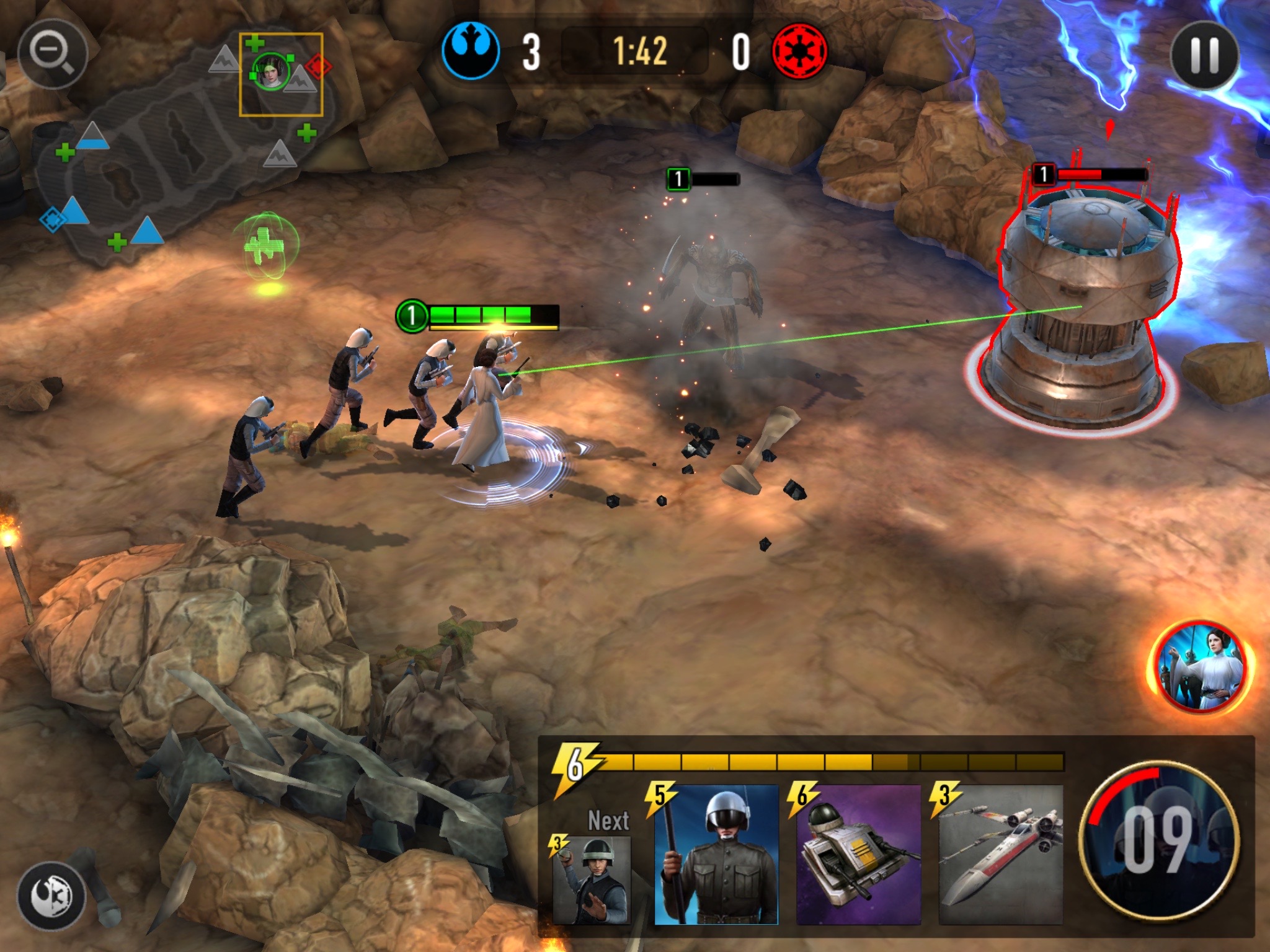 Related to that final point, don't be afraid to turn tail and run if your forces are about to be wiped out. Turrets and massed enemy troops can make short work of an isolated hero.

It takes precious seconds to regenerate your hero, so staying alive - while not essential - is generally a better bet.

That's particularly easy thanks to the health packs that are littered throughout the game field. Run away, heal up, and jump back into the action.

Don't save you special attack too long 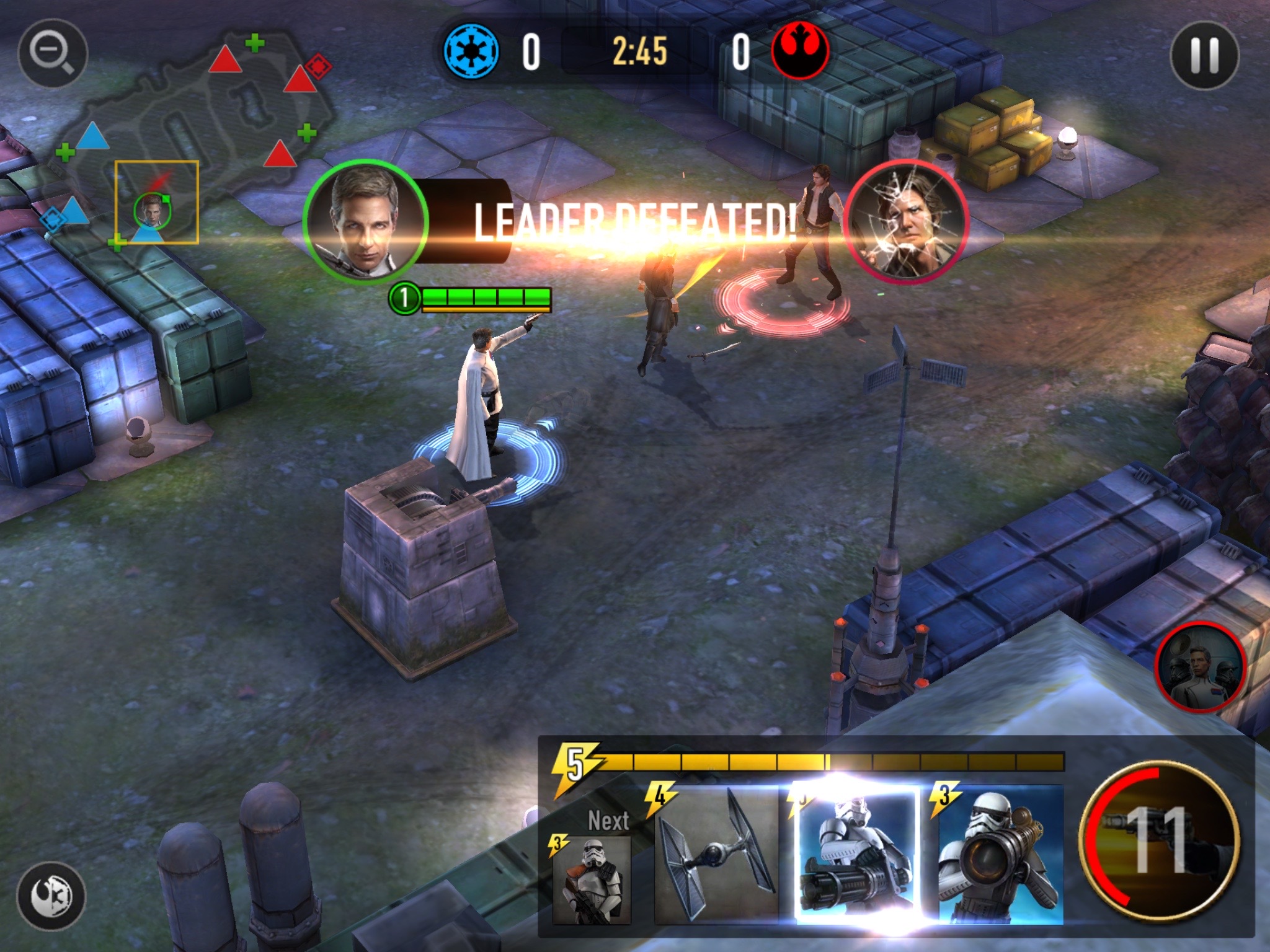 Your hero's special ability can be key to breaking through enemy lines, whether lending an upper hand against another hero or tilting the numerical odds in your favour against heavy opposition.

It's tempting, then, to hoard them until the optimal moment. While you shouldn't hurry to use this ability as soon as it's ready, you really shouldn't be too precious with it. These tend to regenerate quickly, so saving them for too long is simply inefficient.

Learning when to use these attacks is a large part of the art of Star Wars: Force Arena, but don't get too precious about it.

Keep an eye on your map 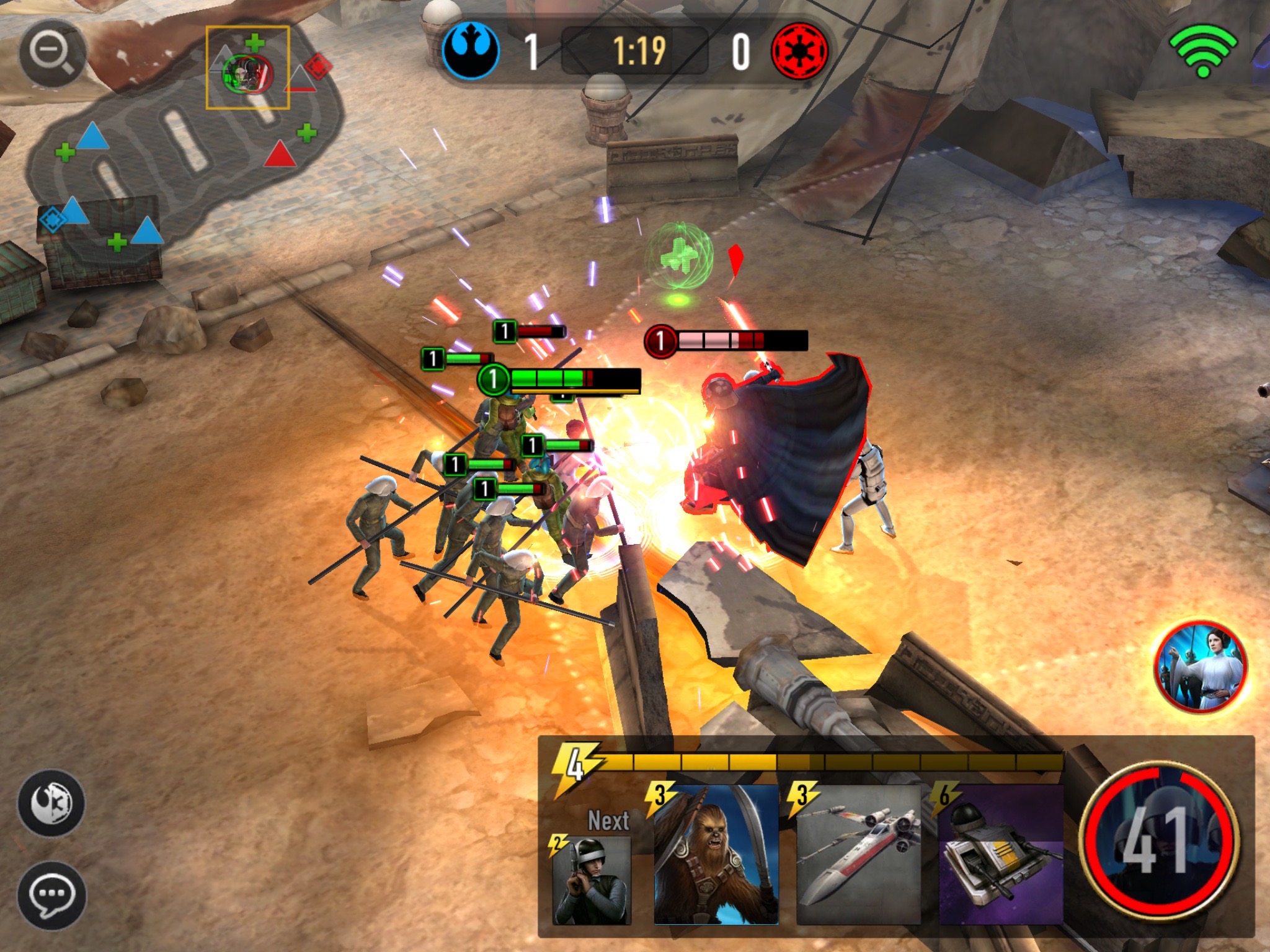 It's easy to get a little blinkered in Star Wars: Force Arena, with the levels naturally funnelling you into conflict and little time to reflect.

However, you need to force yourself to look up and glance at the mini map on a frequent basis. It will reveal the enemy's movements, allowing you to cut off flanking manoeuvres or defend against massed attacks. 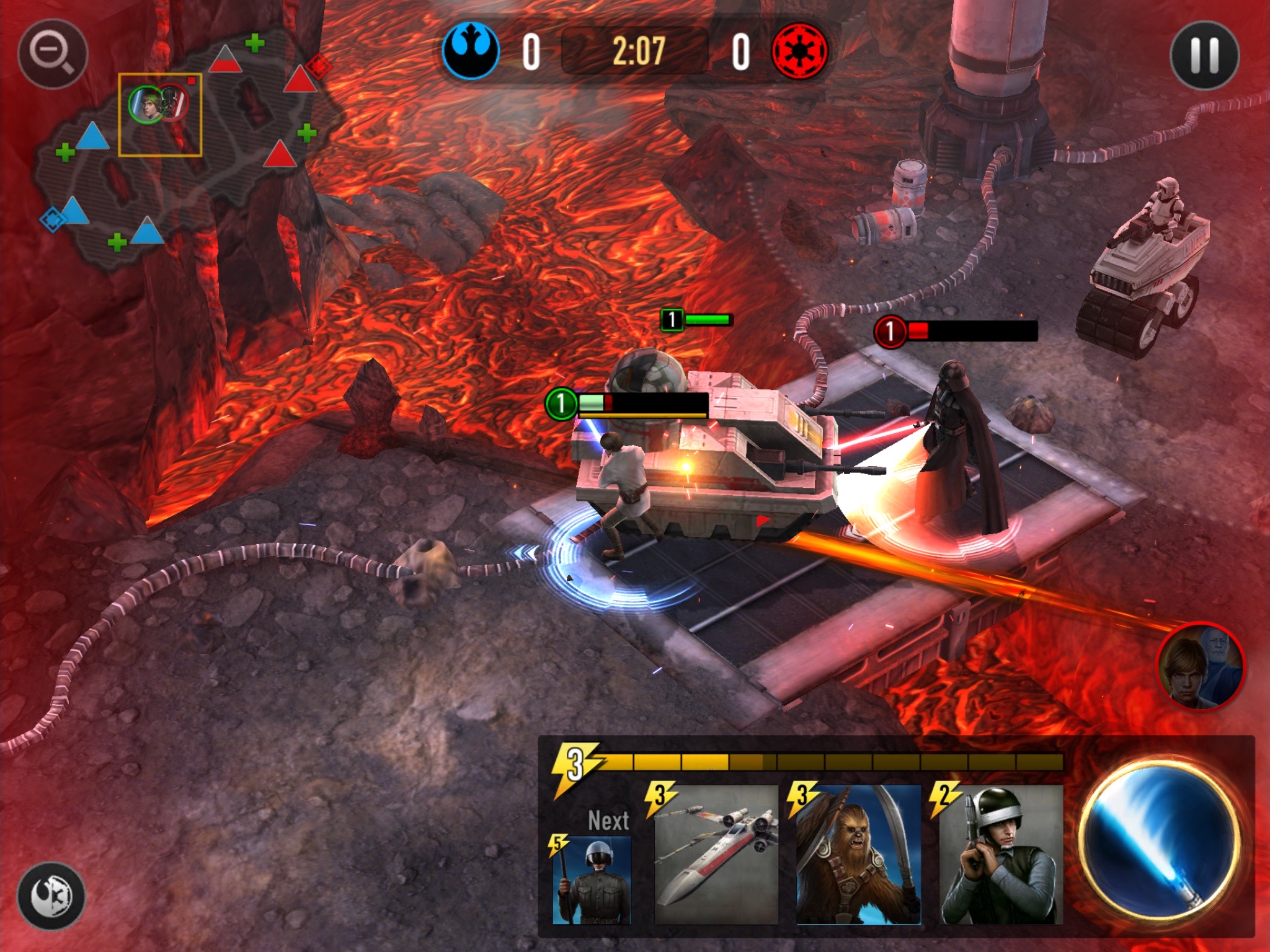 It's tempting to simply engage in tank rush tactics in Star Wars: Force Arena - and it can also be effective. However, the best players will use both lanes, sending out a gang of troops on one before scooting over onto the other.

This will draw the opposing player's attention and split their forces, allowing for a breakthrough in tightly contested matches. 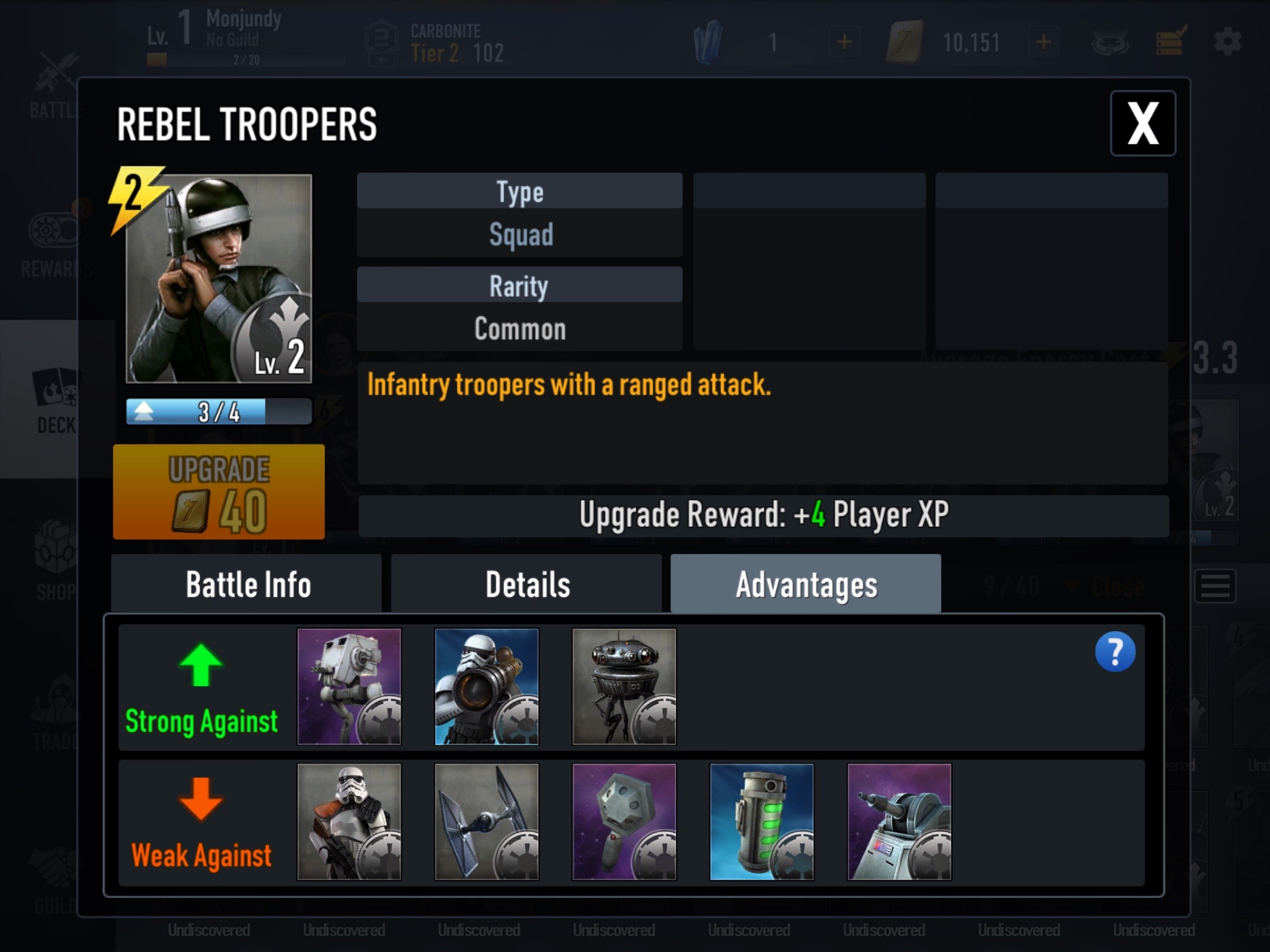 Some of the units look a little samey in Star Wars: Force Arena, so you can find yourself mashing the first one that becomes available in a pinch.

It's well worth swotting up on your deck before each round, though, to remind yourself of the strengths and weaknesses of each unit. Each unit exists in a balanced rock-paper-scissors ecosystem where they're strong against certain types and weak against others. Learn them.

Once you know your units, you can build effective combinations. Head off on an attacking run with several unit types, mixing ranged and melee, and you'll be prepared whatever the opponent throws at you.