PopCap's addictive aquatic-themed card game Solitaire Blitz has finally made the leap from Facebook to iOS. It's currently in soft launch mode on the Canadian App Store, mind.

As the game's name suggests, it's solitaire at breakneck speed. All you have to do is pick cards that are one higher or one lower - regardless of suit - than the card on the target area.

So, it's a lot like Big Fish's Fairway Solitaire - with the same strategic plays and rewarding ten-card runs - except there's an ever-present timer breathing down your neck. 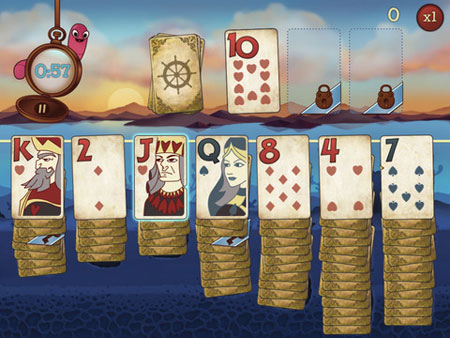 As in all of PopCap's Blitz games, you can buy boosts (either with in-game cash or via a cheeky in-app purchase) in Solitaire Blitz. These items might enable you to destroy a row of cards, add more cards to the deck, get extra time, or reveal runs.

But Solitaire Blitz also has an energy system where you can only play five games before you're made to wait or asked to pay. For the easily addicted: a pack of ten energy vials currently costs £2.49 / $3.99.

Solitaire Blitz also has Facebook support for score swapping, plus loads of treasure and achievements to chase after. If you're into that sort of thing.

If you're waiting to see this land on international App Stores, I wouldn't hold your breath. PopCap's last Canadian soft launch - for asynchronous word battler Bookworm Heroes - is still exclusive to the Great White North, three months on.