We've played Reckless Racing and we've traced through DrawRace 1 and 2.

About time for some Slingshot Racing then?

The steampunk game has you racing on ice, using grappling hooks to slingshot around corners in what described as an "sort of Tiny Wings-style of tap and release" to gain maximum speed.

We've guessing the hooks will automatically connect when you're in range as you tap, with there being a tight zone of release whereby you'll receive the most forward momentum.

Adding to the fun, it's designed with a four player on-device mode, as well as Retina graphics and Game Center support.

Developed by UK developer Snowbolt Interactive (a start up out of Lost Winds and Kinectimals studio Frontier), it will be published by Crescent Moon at some point in May. 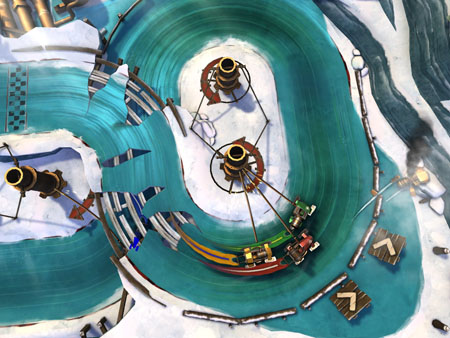 Next Up :
Dragon Quest The Adventure of Dai: A Hero's Bonds is ending service in a few months

The superb Slingshot Racing gets multiplayer, reduced to 69p / 99c