Atlus's approach to Shin Megami Tensei IV can be summed up in one word: unapologetic.

It was over ten years ago that the last numbered instalment of the Shin Megami Tensei series came out, but Atlus isn't remotely sorry about the decade-long gap between games.

Nor, for that matter, did it attempt to show compunction by reducing the difficulty of Shin Megami Tensei IV or by presenting a watered down adventure in its place. Death is a constant threat in SMT IV, and every battle is more exciting because of it.

As soon as you begin Shin Megami Tensei IV you're thrown into the middle of a story and asked to piece together the important elements as you go along.

It begins simply enough, with samurai being chosen by a magical gauntlet in a feudal kingdom. Yet once you see the LED display on the gauntlet and notice the bits of distinctly modern technology hidden around the kingdom, you'll realise that the past isn't quite as far from the present as you thought.

This chronological disparity is eventually explained, but for most of SMT's run it acts as a brilliant side-narrative that you are aware of even if the characters themselves aren't.

While the story itself is quite compelling, the real draw to Shin Megami Tensei IV is demon-gathering, combat, and fusion. 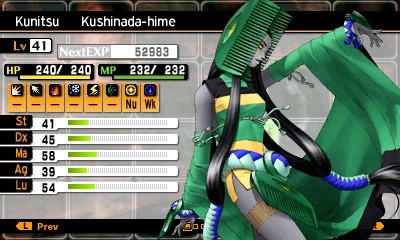 You start off your quest playing solo, and eventually recruit demons to fight in your party. This recruitment process is far from simple, however, and requires a good bit of skill, negotiation, and dumb luck to attract some of the more headstrong spirits.

The turn-based combat flows well, with the Press Turn system rewarding you for intelligently attacking an enemy's weak spot.

A new status, Smirk, has been added to Shin Megami Tensei IV which further rewards you by granting increased damage output, enhanced avoidance, and all-around ass-kicking potential to any character who scores a lucky critical hit or earns a successful Press Turn.

However, battles in Shin Megami Tensei IV are not easy affairs - even with the return of the Press Turn system and the new Smirk status.

Unlike Fire Emblem: Awakening, which softened its difficulty with the inclusion of a Casual mode, Shin Megami Tensei IV isn't afraid to confront players with full-party wipes in random encounters.

This is one of the most enjoyable - and rewarding - decisions Atlus made, as it creates a sense of threat and urgency during even the most routine battles.

Smirking aside, the most pleasant surprise of Shin Megami Tensei IV is how brilliantly it harnesses the 3DS's hardware to deliver a captivating visual and auditory experience. 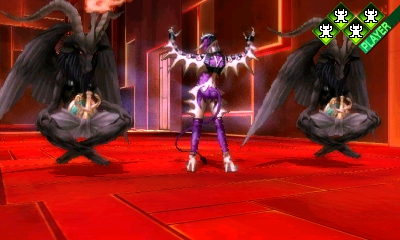 The 3D effect adds a great amount of depth to the third-person overworld map, and its presence in the first-person battles helps to bring the intricate artwork to life - especially where the larger 'horde' enemies are concerned.

On the audio front, full voice acting - a franchise first - is a welcome addition and helps fully immerse you in the mysterious world of Shin Megami Tensei IV.

The devil, you say?

Its difficulty and intricate fusion system are, paradoxically, the most enjoyable and frustrating elements of the game. But if you take your time to understand and master both, you'll walk away from Shin Megami Tensei IV hoping that Atlus doesn't take another decade to churn out the fifth act.

And even if its does, chances are you won't notice. Shin Megami Tensei IV delivers an exceptional and dark role-playing adventure that will keep you coming back for more.

Like a bottle of fine scotch, SMT IV won't be for everyone - but those RPG enthusiasts who can appreciate its subtlety and challenge will cherish it for years to come.
Next Up :
Netflix Oxenfree review - "Reading the signals of a thriller story"