Primed for this month

The Serious Sam franchise is making its iOS and Android debut this month, but it won't be a first-person shooter as you might expect.

It is, in fact, an auto-run platformer that sees you playing Sam's iconic foe the Headless Kamikaze.

Your job over the game's 40 levels is to dodge hazards, avoid gunfire from the man himself, and do what you do best: Destroy Sam 'Serious' Stone [insert evil laugh here].

You'll either die by Sam's hand or in a blaze of glory under the service of Lord Mental. It's a no-win scenario.

Serious Sam: Kamikaze Attack features colourful hand-drawn artwork, which - according to the press release we've just received - aims to distract you from your inevitable violent death.

You can also take part in five bonus endless levels, climb up the leaderboards - if you have the required skills - and 'spam' your friends' Facebook feeds with your progress.

Finally, the rather humorous press release includes 'Sweet Ass Credits' with 'first and last names' as a killer feature.

We don't have a price to give you just yet, but with the game is expected this month, so we should have more information soon. 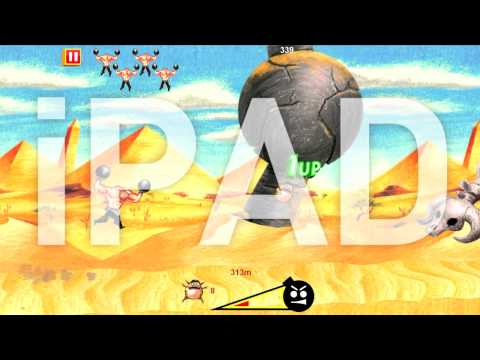