A new video from Rumble Stars has been released that reveals some changes coming to the game this September including new Rumblers. They unveiled this new information with the Rumblers at the end but we're going to flip that because it's the more interesting stuff.

First up there's going to be a new core Rumbler called Bouncy Board, who is simply a spring attached to a wooden board. He will launch a teammate or the ball into the opponents half, kind of like a reverse mammoth. However, unlike the mammoth, Bouncy Board doesn't move and will break after one use, regardless of any stamina remaining.

Next up there's the Enchanting Unicorn. This a legendary level Rumbler that fires a rainbow at an opposing player and turns them into a teammate for a brief period. In the video – which you can see below – one tactic you can use is forcing a Loyal Dog to betray his team by passing the ball to a Lazy Panda who slots one past the keeper. I do love irony. 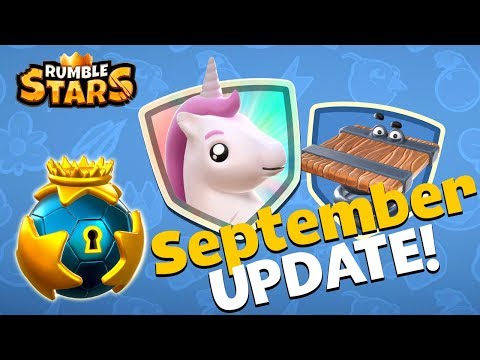 Finally, a third Rumbler was teased. We didn't get specifics, just some meowing and the sounds of thunder. So, a ThunderCat if you will. Anything at the moment is speculative so my guess will be a cat that can stun opposing Rumblers with electricity.

Alongside the new Rumblers, it was also revealed that you will now be able to leave your club temporarily to play for another team in a tournament without losing your Club Chest. Additionally, once you've earned 4000 trophies legendary Rumbler's will be available to buy from the store. Previously they would only appear as special offers.

Finally, a few changes are coming to matchmaking that they're calling the Underdog Rumble. If you're more than 3 levels below your opponent your level will be increased for that match. It will still only bring you within range of 3 levels but you will also only lose 50% of the trophies compared to an even match-up defeat.