The Tycoon series was once a byword for a brilliantly entertaining blend of building, resource management, and light-hearted yet challenging strategy. With a distinctive visual style and addictive gameplay, Tycoon titles were fixtures in the formative years of many gamers.

Like many other classic franchises, it's been resurrected on iOS as a 'paymium' title (i.e. it has all the hallmarks of a free-to-play game, but you have to pay for the initial download well.) Unlike many, this is billed as the fourth iteration of the Rollercoaster Tycoon series rather than a mere mobile version or straight port.

That implies a certain level of improvement over its predecessor, now over ten years old. But does it measure up to the billing?

The first thing that struck me was how brilliantly Atari has replicated the bright, cheerful look and feel of the original series. To anyone familiar with the franchise, it strikes all the right chords visually and aurally, although the jingly-jangly soundtrack gets a bit repetitive.

But then that was probably true of the old games too: we expected less back then.

Working through the tutorial is breezy enough, but since this is paymium game I'm on the lookout for timers. I don't have to wait long - about the second thing I'm instructed to do is build a carousel, and about the third is use "tickets", a paid-for resource, to speed it up. 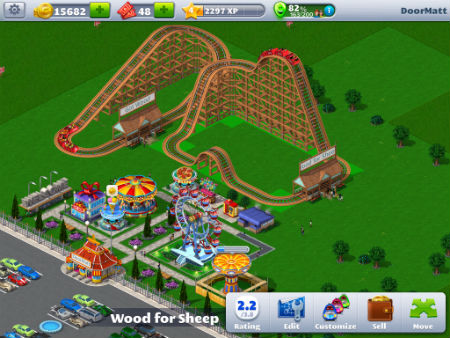 But as my park begins to take shape, none of the waits seems particularly onerous. More like reflections, again, of a bygone age when games put timers in when you built stuff because it seemed realistic.

The nostalgia hooks on this title feel wickedly sharp.

Building my first rollercoaster is a mixed bag. After a super-gentle tutorial, the game suddenly throws lots of information at you concerning coaster design, and the interface for constructing it seems clumsy and awkward on the touchscreen.

Then you get to name it and watch little simulated people ride it and the other attractions in your park and generally look like they're having a great time.

There's always a fun sense of accomplishment in building games, a feeling that you're making something of your own that you want to nurture and grow into something really special. Rollercoaster Tycoon makes it explicit with goals you can fulfil for extra rewards.

But at the end of my first session I'm wondering where the challenge, the actual game is going to be long term.

It's amazing how much you can discover about a game in two days.

I've discovered, for instance, that the quickfire timers you encounter early on in the game are rapidly replaced by really quite long timers of several hours if you want to do anything of consequence.

I've also discovered that if you leave the rides in your park for any length of time they break, apparently at random, then require nothing more than the tap of a spanner to repair.

If I were being cynical, I might imagine that this was a paper-thin mechanic whose only purpose was to ensure you checked in as often as possible. But this is a paid-for game, so I can't imagine for a moment the publishers were that callous. 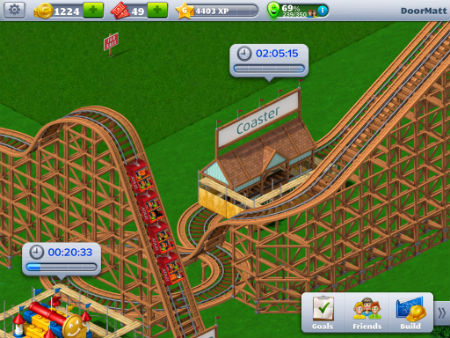 But perhaps most interestingly I've discovered the game has a sales funnel.

It's an odd thing to find in a game, but when you're largely reliant on completing arbitrary "goals" to get experience points and coins, and you reach a point where one of your goals requires more XP than you have, the other requires more coins than you have, and the only ways to get more of either are to wait an age, pay real cash, or complete the third goal (which is to recommend the game on Facebook) I'm not sure what else you call it.

Oh, and it's worth mentioning that this Facebook goal has vastly higher rewards than either of the others. But that's just a mistake, I'm sure, as the publisher of this paid-for title would never be so grasping.

What I haven't discovered yet is a game beyond checking in every few hours and randomly building stuff to complete goals. You can design rollercoaster tracks to maximise their thrill factor, but that clunky interface really makes you not want to bother.

Wonder what I'll discover in the next four days?

It was a pretty hellish four days, all told. I took on the virtual toil, regularly logging in and monotonously tapping to collect coins and experience just to pass through those goal barriers and find out what's on the other side. To which the answer was invariably higher barriers.

Astonishingly, there really seems to be absolutely nothing in this app that serves any purpose whatsoever other than to try and squeeze more money out of you. There's no challenge, no resource-management, no humour, nothing.

That would be bad enough in a free game, but given that players have already paid to acquire this title in the first place, it's totally unacceptable here.

To add insult to injury, it isn't even very well made. As your park grows, there are increasingly substantial lag times involved in rendering it when you start the game up which, given the cheap and cheerful graphics, is just pathetic. There's no grab and twist to change the field view, making it frustratingly hard to position things on the isometric grid.

But hey, if you overrun you can just spend even more real money to buy yourself some more play space, right?

Rollercoaster Tycoon 4 is a worthless and wholly cynical attempt to cash-in on a beloved franchise. Not only is it devoid of entertainment value, but having to play it for seven days actually made me angry and depressed, which is surely the complete opposite of what a game should do.

How are you getting on with the game? You can tell us and the rest of the PG community about your experiences by leaving a comment in the box below. Click here to learn about our free-to-play review policy. Update: This review initially claimed that Rollercoaster Tycoon 4 Mobile is a free-to-play game, which it is not, so we've made the necessary edits.

Little more than an abject demonstration of how micro-transaction abuse can completely destroy the amusement value of a game
Next Up :
Evony: The King's Return review

GDC 2014: Atari shows us what you can buy in Rollercoaster Tycoon 4 Mobile