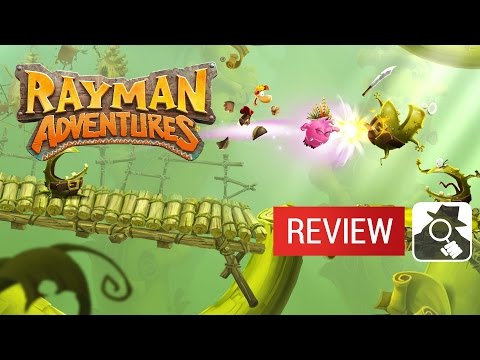 Subscribe to Pocket Gamer on
Rayman Jungle Run and Fiesta Run are among the best platformers on the Apple ecosystem.

At times, it's almost as dastardly, joyful, and as thrilling as those old games. The stages that force you to find the perfect route through a gauntlet of obstacles and enemies are every bit as tough and rewarding as an average Jungle Run level.

But those well designed platforming challenges are too often punctuated by short, unsatisfying, and samey levels.

Running out of steam

Stages in Adventures are generally one of three types. Combat stages ask you to beat up as many enemies as possible on the way to the goal. Lum levels are about snorting up collectibles. And puzzle stages have you looking around for treasure.

Those last ones really make use of Rayman's new ability: changing direction. You can now spin around with a swipe of the Apple TV remote, which means levels can be less linear and you can go back to pick up stuff you missed.

In general, the controls work well with taps and swipes letting you (almost) effortlessly jump, spin, kick, dive-bomb, and fly through the stages. The menus are a bit of a pain though, as they're obviously designed for fingers to tap through.

Anyway. The different stage types correspond to the different creatures - Protectors, Inhalers, and Seekers - which are fuzzy critters who help out in stages. By letting you take a hit, sucking in Lums, and tracking down secrets.

It's all part of a free to play-friendly system where you find, feed, and collect the creatures. Luckily, the monetisation stuff isn't egregious, other than the pseudo-energy system involving incubators (don't ask), which means you can't revisit old worlds.

That means you can't get into highscore showdowns with friends, like you could in Jungle Run. And the desire to ace each level (there's a typical three star scoring system) is nullified when you can't even see your stats on previous worlds.

Most often, the game reminds me of Trials: Frontier. That game was ostensibly a Trials game, but the thrill of dirt bike gymnastics was mitigated by a need to make money with thousands of samey stages.

Rayman Adventures certainly feels more like Rayman than Trials Frontier feels like Trials, but the charming hand-drawn art, bouncy platforming fun, and upbeat soundtrack of the Rayman series are showcased to better effect in a conventional premium package.

Rayman Adventures is now available on iOS and Android too. So we gave this smartphone and tablet edition a go, and see how it compares to the Apple TV original.

It'ss certainly a more natural fit on mobile. The touchscreen controls work slightly better than those on the cramped Apple TV remote, and the bitesize levels match the way we dip in and out of mobile games.

But the underlying issues - that there are too many repetitive and unmemorable levels that lend themselves more to monetisation than to fun and competition - remain. It's another colourful, bouncy, and fun game, but it's not up to the standard of Fiesta and Jungle Run.

Rayman Adventures is another bouncy, charming thrill ride, but it rarely meets the dizzying highs of Rayman's previous efforts
Next Up :
Otaku's Adventure mobile review - "A truly bizarre love triangle"