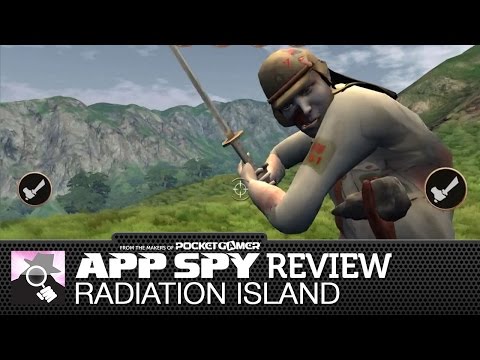 Radiation Island is an intriguingly ambitious survival game, and for the scope of its vision alone it deserves a good deal of praise.

It might not be the perfect fit for mobile, and there might be a few niggles here and there that keep it from greatness, but there's something impressive and compelling about it all the same.

The game is all about surviving on a strange island. There are plenty of predators, both natural and mutated, abandoned structures, and a huge expanse of dangerous land.

You don't just need to worry about getting eaten by a crocodile or mauled by a zombie though, you also need to eat. And when the night draws in you need to keep warm. Fires keep hungry beasts away as well.

There's crafting to do, too. You start with a simple club, but you'll need to build better offensive and defensive weapons if you want to survive. Luckily the island provides everything you need to make torches, arrows, bows, and a range of other tools.

Crafting is simple. Make sure you've got all the stuff you need, open up the crafting menu, and tap on the thing you want to make.

The controls can be a little fiddly. You move by pushing a thumb around the left of the screen and look around by doing the same on the right. Then there are two buttons that control what your hands are doing.

It's a bit too easy to press one of those buttons and waste some ammo when things get frantic, but with a bit of practice your thumbs settle lower down the screen.

There's a lot to do in Radiation Island, and exploring the ruins and forests on offer is an engaging, often tense experience.

Some might find it a little too empty, and a little too hands-off, but if you're looking for an entertaining wander through the ruins of humanity, then you could do a lot worse.

A bold and intriguing adventure with an impressive scope, albeit one that's held back by a few niggles here and there
Next Up :
Roller Drama review: "Scheme with your team, skate great"