Yet, somehow, what emerges from this almighty tangle is something quite brilliant.

Initially designed for Xbox Live Arcade, the game arrives on iOS after a protracted development period, in significantly different shape from its original form.

There’s no multiplayer component (yet – one is due to arrive in a future update) so Denki has reworked Quarrel into a solo game.

By now, you may have heard it described as ‘Scrabble meets Risk’, and while that doesn’t convey the game’s depths and idiosyncrasies it’s a good starting point. Your objective is to control all the territories of a board by engaging your opponents in word battles against the clock.

Whether a rival is moving into a square you occupy or you’re hoping to capture an enemy zone, the result is the same – a face-off where both players compete to make the highest-scoring word from eight letter tiles.

You have a number of troops at your disposal in each square, which represents the maximum number of letters you can use.

Initially, your teams will typically contain between four and seven members, though this changes as battles are won and lost. There are no draws – if the scores (or even the words) match, whoever was fastest wins the round.

If you’re attacking and you play a higher-scoring word than your opponent, you’ll move into his territory, leaving one of your squad behind. A successful defence sees your group remain where it was but with your opponent’s team depleted to a single man.

On boards with more than two players, obviously you won’t be involved in every battle, so when two rivals are facing off you’re given the opportunity to work out the anagram from the eight tiles provided for bonus points.

Doing this – and occupying new territory, especially when you’re on a victory streak – fills up a meter which eventually grants you additional backup.

So if your four-strong team is facing an uphill battle against six soldiers, you can give yourself a fighting chance by throwing one more troop into the fray.

Quarrel was undoubtedly conceived as a multiplayer game, and Denki has worked wonders in making it still feel like one.

Each of your opponents has a distinctive personality, with some possessing a strong vocabulary but a weak tactical mindset while others play their words quickly but rarely hit six letters.

You’ll find yourself racing to place a strong word against the slow but intelligent Helena (a tally of 12 ties won and only four lost attests to the validity of that tactic) or risking a smaller group against Caprice and Biff for the underdog bonus you’ll receive from a victory against the odds.

Even when playing against the tougher opponents, you’ll rarely feel like they’re cheating. The fearsomely good Kali is the exception - she frequently tosses out seven- and eight-letter words as if someone replaced her brain with a dictionary.

Otherwise, you’ll feel you’ve been genuinely outsmarted by a real player, the AI brought to life through cartoon character portraits (complete with funny little animations) and the noticeable quirks of their disparate play styles. That they sometimes make stupid mistakes is all part of the charm.

With three game types, including tricky daily challenges and a lengthy Domination mode, there are plenty of opportunities to get to know your opponents while you wait for real people to play against.

In the meantime, Denki has created a meticulously-constructed gem of a word game that doesn’t miss multiplayer nearly as much it probably should. 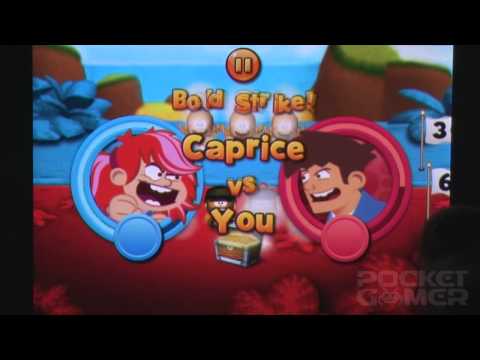 A superb word-strategy game with enough polish and charm to overlook its lack of multiplayer. GROLOUSI
Next Up :
REDMAGIC 7S Pro Supernova Lords Mobile Edition review - "A true powerhouse dedicated for mobile gamers"