What's in the box, and how it looks and feels 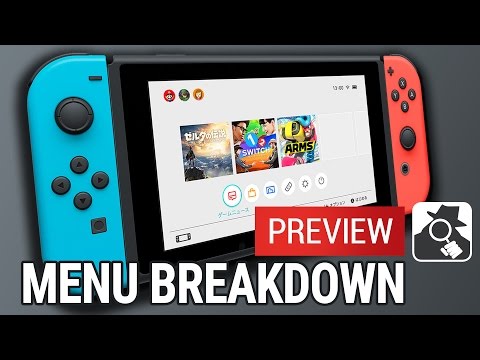 Subscribe to Pocket Gamer on
We're mere days away from the launch of the Nintendo Switch, and the dial on the hype metre is set to bursting.

For those of you still on the fence about it though, Nintendo has kindly sent us a preview unit to help you make that all-important decision: do you pre order?

And if this doesn't help, we'll be back closer to the launch with a full review.

We went hands on with the Switch back in January, so already have a pretty comprehensive report of how it looks, feels, and plays. Rather than cover old ground, this report will focus on the key aspects we didn't see that time around.

So put your feet up, grab a cuppa, and read on for more insight into what you'll be getting with the Nintendo Switch.

Bar games, the Switch comes with everything you need to get started. This includes: 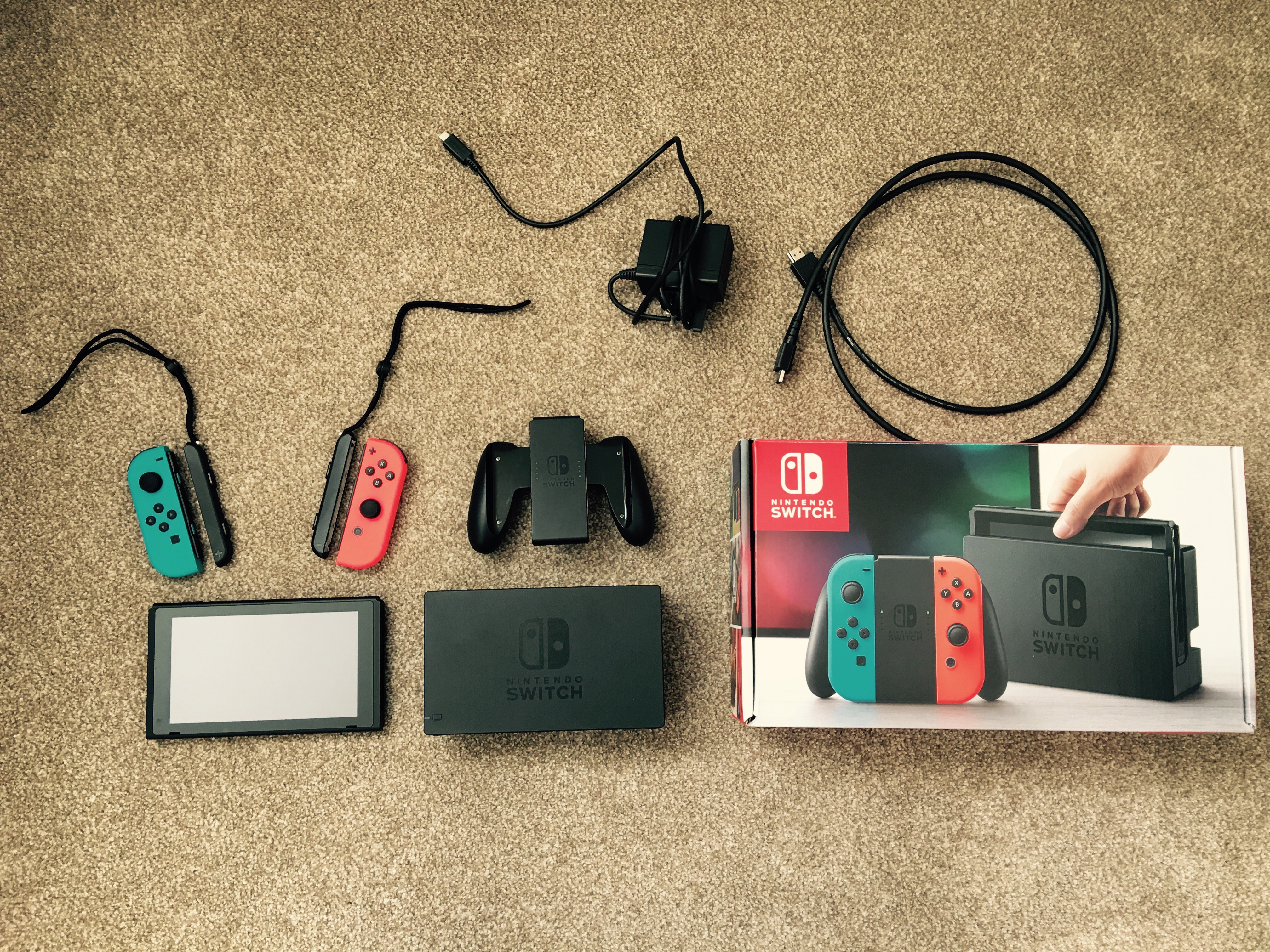 What else will you need?

Well, aside from the obvious - games - that all depends on how you plan to use it. Take a look at the few scenarios below and see which applies to you:

If it's just two of you, you're pretty much all set. The left and right Joy-cons can be used independently of each other with the majority of games, and the two straps included make this a lot more comfortable.

You'll need to buy another set of Joy-cons if you plan on regularly playing with up to four players though, and particularly when Arms launches. That requires two Joy-cons per player.

You play in handheld mode most:

If that's the case, then you're all set. The Switch unit, attachable Joy-cons, and touchscreen are all you need to play games on the go.

You can also set it up on a table using the handy retractable stand, and pull the Joy-cons off to play in tabletop mode. 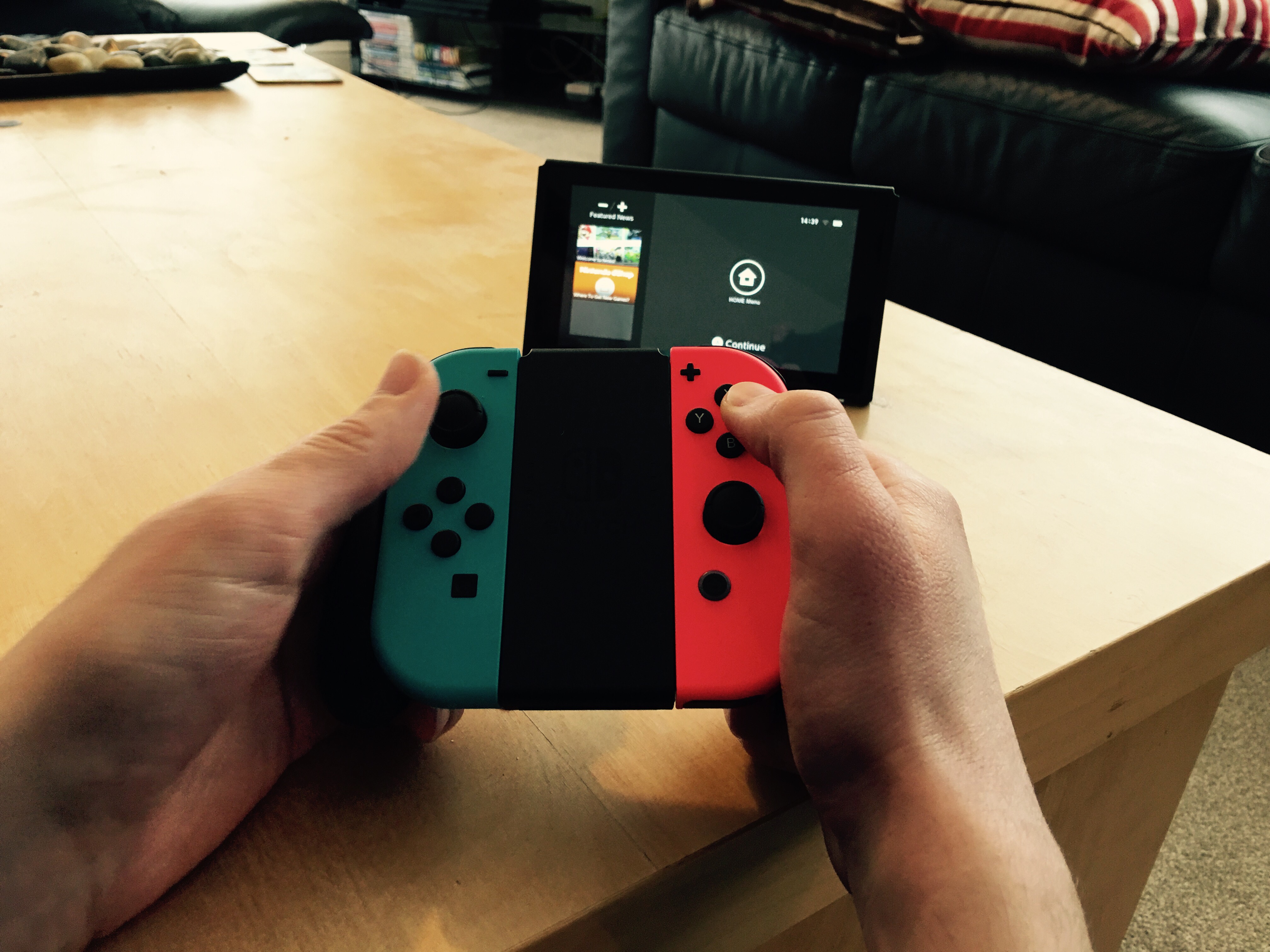 When leaving the house, you might want to invest in a case to both keep your Switch safe from damage, and to carry everything you'll need in one place. There's an official Nintendo one, but you can shop around to see what else is out there.

You might also want to grab a power pack to keep your Switch charged while on the go - particularly if you're travelling a long distance without a charger.

You play in TV mode most:

Again, you're all set - everything's included in the box.

While the Joy-cons are a true, well, joy to use, if you're a traditional gamer, you might want to grab yourself a Pro Controller. It has all the same features as the Joy-cons (minus the splitting in two thing, of course), and will be a tad more familiar.

Definitely grab the Joy-con wheel pair. You might just be the only person to do so, you rebel.

As you can expect from a Nintendo product, setup is very simple.

The Joy-cons slide into the Switch unit with a satisfying click - and the same goes for the grip or straps. Removing them is just as easy, with a small button placed at the top to pop them out. 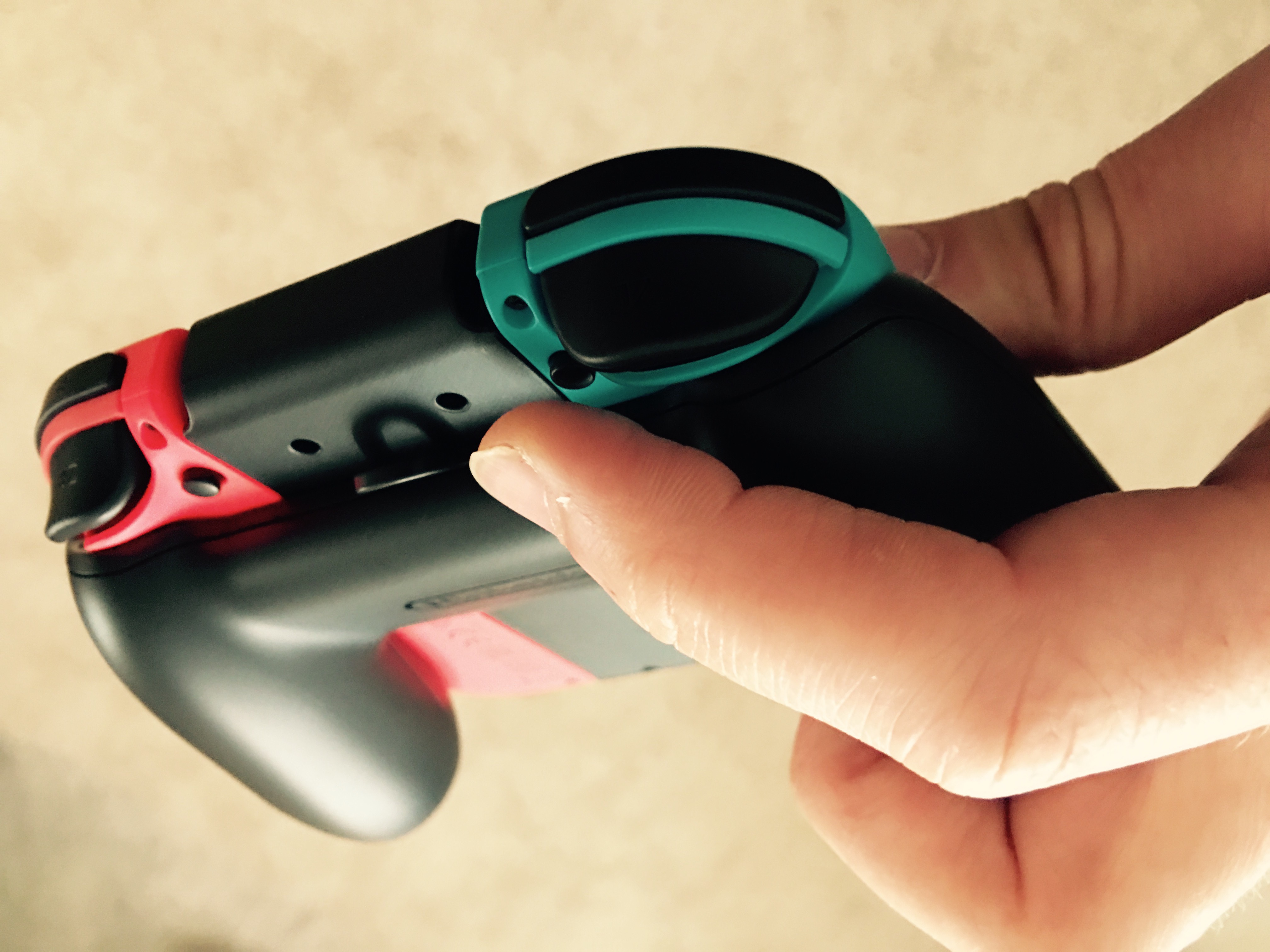 TV setup is also a breeze. Place the dock on your stand, plug in the cables (there's even a nice cable tidy function in the housing of the dock), and slide the Switch into the dock. That's it. Turn your TV to the correct HDMI channel and the Switch will just work like magic.

First-time setup of the console is also remarkably easy. Answer a few questions, pick a profile name and picture, then pop in a game and get going. Sure, down the line there might be a brief update to install, but right now it's a breeze.

So this is an area we covered extensively during our hands on, but after having more time with the Switch, we still feel the same about it: it's gorgeous, and very comfortable.

We'll leave our full critical analysis to the final review, but the build quality is more than a few steps above the Wii U, and just a bit better than the New Nintendo 3DS. The tablet screen is gorgeous, the Joy-cons comfortable, and the buttons all have a satisfying click to them.

The adverts don't exaggerate either - playing on the TV really is as simple as popping the unit into the dock, and sliding the Joy-cons here there and everywhere is incredibly easy.

That's a good thing, as you'll be doing all of the above a lot if you want to get the most out of the unique functionality of the Switch. 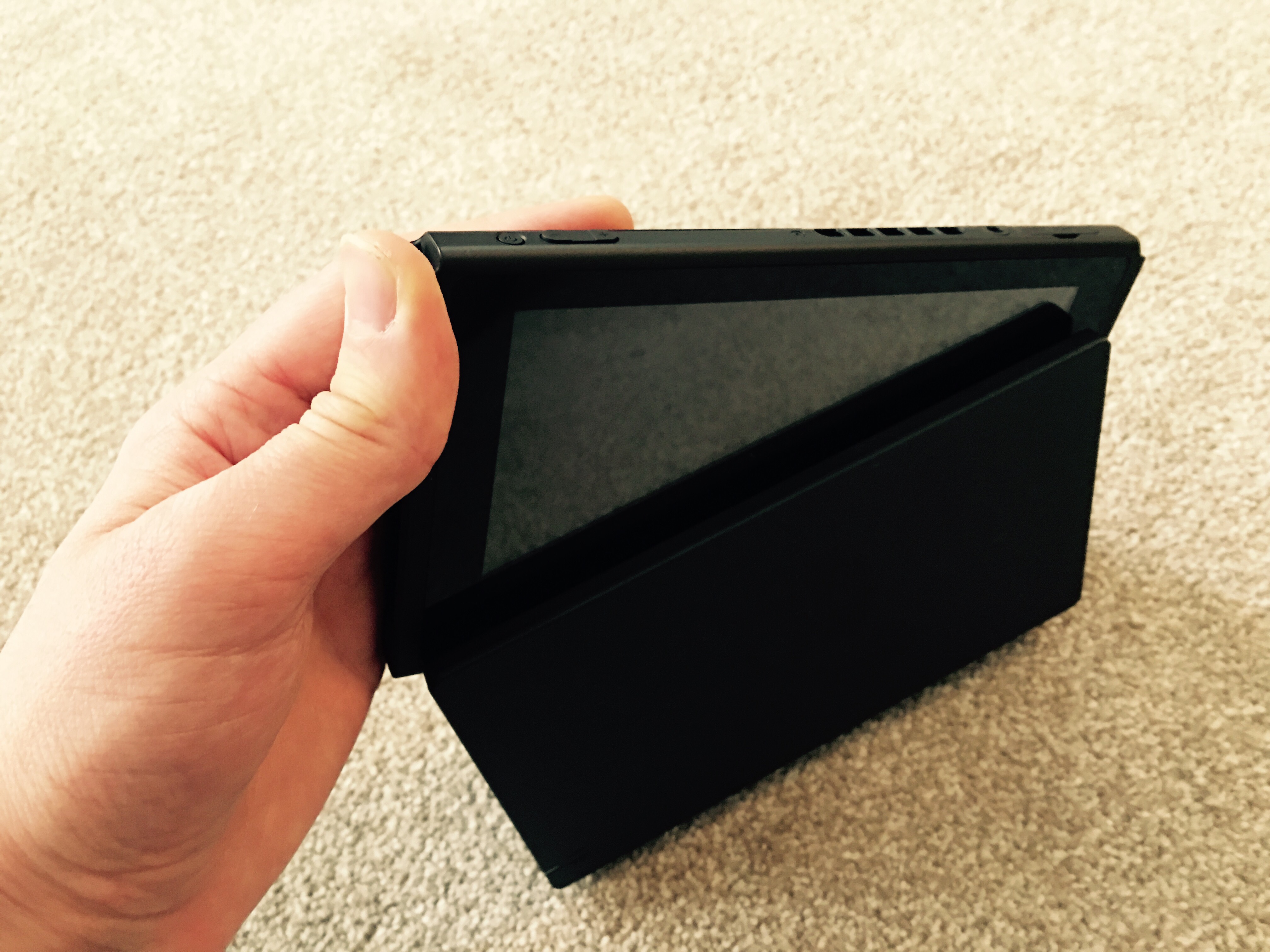 Boot up the Switch, and you'll find a nice, clean interface, with the games taking centre-stage and minimum clutter elsewhere. It's a nice change from the quite full-on experiences your PS4 or Xbox One offer.

The settings screens are reminiscent of an Android device in design, with just a long scroll of different options to tweak. Tap on anything, and you'll quickly see that this is a Nintendo console though, as most buttons have a nice little sound or effect when pressed.

We can't talk about the full range of features just yet, but you can scroll through your album of screen captures, tweak Joy-con and controller settings, put the system in sleep mode, and access the system settings from the home screen.

You can also customise your profile, which includes an avatar and name, and a list of friends. We don't have any friends right now, but it's only just released so cut us some slack.

And that's just about all we can talk about right now. For more information, you can read our extensive hands-on, watch our preview video, and grab yourself some accessories with our buyer's guide in time for launch.

We're also happy to answer any questions you may have. So head on over to our AMA page and ask away in the comments.