Hands-on with the new Gametel wireless controller for Android

Now any Android owner can Play

We really like the Sony Ericsson Xperia Play, especially now it's on sale for a reasonable price but we're not surprised some people don't fancy carrying around a rather bulky smartphone for relatively short periods of actual game playing time.

That's why a Swedish company called Fructel came up with the idea of creating the Gametel gamepad, which can be attached and detached at will, so you only need to have the gamepad when you want to play a game. When you go into your important business meeting, nobody need know you've got one of these in your briefcase.

Pocket Gamer was given a prototype to have a play with ahead of its December launch. 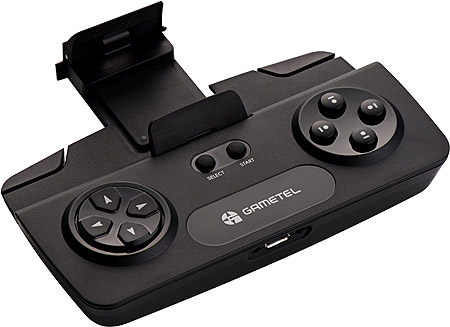 Another bonus of a third-party accessory like the Gametel is that it works with a whole range of Android smartphones, running Android 2.1 or above. This means you can happily connect it to your favourite HTC, Samsung or Motorola phone, to name but a few. That's surely good news for developers too.

To attach, you simply slide out the spring-loaded clamp with rubberised grips at each end, insert your phone in landscape mode and you're good to go.

At last, you can enjoy games that – no matter how impressive your phone might be in the screen and processing department - simply don't work well when controlled with on-screen joysticks and action buttons. 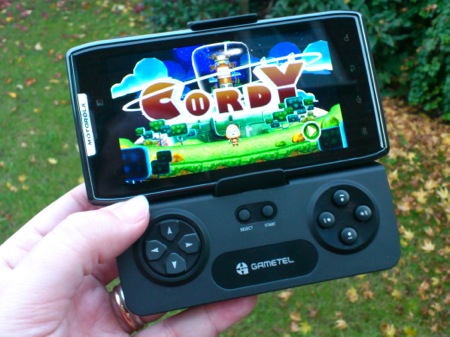 The Gametel wireless controller operates over Bluetooth, adding itself as an input device in place of an on-screen keyboard. Simply download the free driver from Android Market, pair the device and you can be set up in less than a minute.

The only thing to be aware of is that when the Gametel is connected, you can't use the on-screen keyboard until you switch off the Gametel, or Bluetooth. It's a minor niggle though, as you can easily turn the gamepad on and off by holding the Start button for a few seconds. 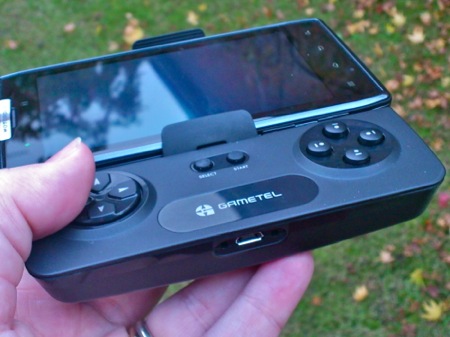 The internal battery is good for nine hours of operation, and it automatically shuts down if you don't use it for six minutes. Speaking as someone who regularly forgets to switch off wireless speakers and headsets, this should prevent those frustrating situations where you find it dead when you next want to use it.

When you do need to charge it, simply use the same micro-USB charger that you use for your phone.

Unlike the Xperia Play, there's no analogue pad on the Gametel, but you do have a D-pad, four action buttons, start, select and two shoulder keys.

Fructel was keen to point out that relatively few games are designed to use the analogue controls anyway, and it seemed apparent to us that there's probably no way to support such controls on something that presents itself to the phone as a keyboard.

The unit we were given to test out is still far from complete, and there will be a number of tweaks to improve the build-quality, from hiding exposed screw holes on the rear to making the buttons a bit more sturdy.

Nevertheless, the prototype still felt comfortable and the clamping mechanism looked like it wouldn't break despite repeated use. We'll save passing judgement until we get a retail unit.

Currently, developers making games for the Xperia Play ensure the optimised versions are only shown to Play owners. Fructel is currently talking to game developers to convince them to make gamepad compatible games show up for all Android users, but before that happens there are still over 50 games available already. 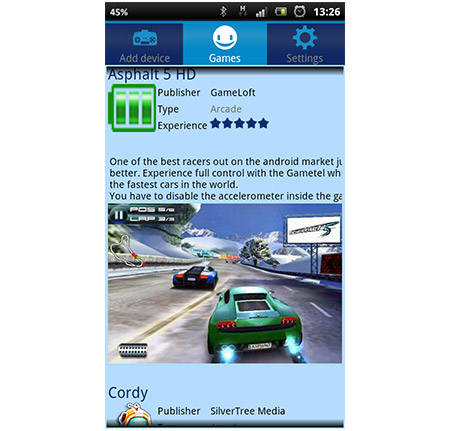 These include titles like Cordy (as pictured here), Asphalt 5 HD, Reckless Getaway, Guns’n’Glory, MotoX Mayhem, Happy Vikings and Zenonia. Rather than list them all, the Gametel app lists a number of compatible games, along with comments (some games, for example, still need you to select things on the screen itself) and a download link.

Featuring on the big screen

With the growing number of Android devices with HDMI outputs, the Gametel controller has another advantage over the Xperia Play, namely the ability to detach the gamepad and sit on the sofa, with the phone hooked up to a big screen on the other side of a room. 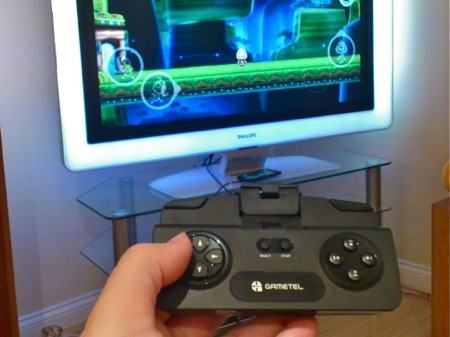 I hooked up a Motorola RAZR to a 42-inch TV and sat down to enjoy a quick blast of Cordy. It wasn't long until I was downloading other titles and realising that any half-decent Android smartphone can become a respectable game console in seconds.

You can even pair up to four Gametel controllers with a device at the same time for multi-player gaming.

Games that require the use of the touchscreen to restart a game, or skip on a section, will probably not be favoured here.

For now, I have just the one controller but I'm suitably impressed. You can use the Gametel with an Android tablet too, but obviously you won't be able to clamp it on.

To become a huge success, the Gametel needs to become available on the high street, or even come bundled with a new phone, but there's no denying the fact that some games border on unplayable with a touchscreen alone. If you decided against the Xperia Play, but still want to play more than the most casual games, here's a viable alternative.

The Gametel controller is set to go on sale in time for Christmas with a suggested retail price of £49.95 and it seems like the perfect gift idea for someone who is into gaming, even if that someone is in fact yourself.

To order or get more information, visit the Gametel website.