Dealing on the App Store now

The Walking Dead creator Telltale has once again found a hodgepodge quartet of cartoon characters, and forced them to play poker together. This time, it's on iOS, too. And it's available on the App Store now.

In Poker Night 2, you'll play against the likes of smart alec robot Claptrap from Borderlands, and Sam from Telltale's own Sam & Max.

But here's where thing go weird. There's also Brock Samson from Adult Swim cartoon The Venture Bros, and Ash Williams from the movie Army of Darkness (not voiced by Bruce Campbell, it should be noted).

Oh, and Portal's pernicious and nefarious overseer GLaDOS is your dealer for the night. And there are cameos from characters like Borderlands 2's Mad Moxxi, Doug from The Walking Dead, and Winslow from Tales of Monkey Island. 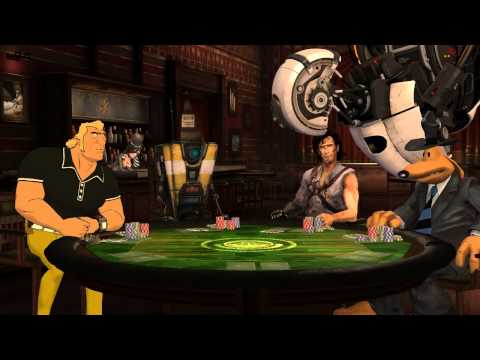 It's a full-on poker simulator (Ohama or Texas hold 'em rules), but your competitors will trade quips and catchphrases between hands, and lengthy anecdotes between rounds.

You'll also unlock goodies like themed tables, chips, and cards when you win.

Next Up :
Tears of Themis adds new cards for Vyn and Marius in Cozy Couple's Getaway I event