The recent glut of great indie games on the Switch eShop might make you question whether now is the best time to bring a game like Neon Chrome to the platform.

Conversely, with Bladerunner 2049 in cinemas and a somewhat bleak political climate, now could be the ideal time to play this dystopian action game.

There's a chance you've passed within shotgunning distance of 10tons's enjoyable blaster before. It cropped up on mobile (and other platforms) last year.

If not, you should know that this is a meaty twin-stick shooter wrapped up in a neon-and-rain-soaked futuristic setting where the titular mega-corporation rules all with a cybernetically enhanced fist.

You take control of a succession of human clones in an attempt to ascend the corporation's monolithic tower and topple the all-powerful Overseer. 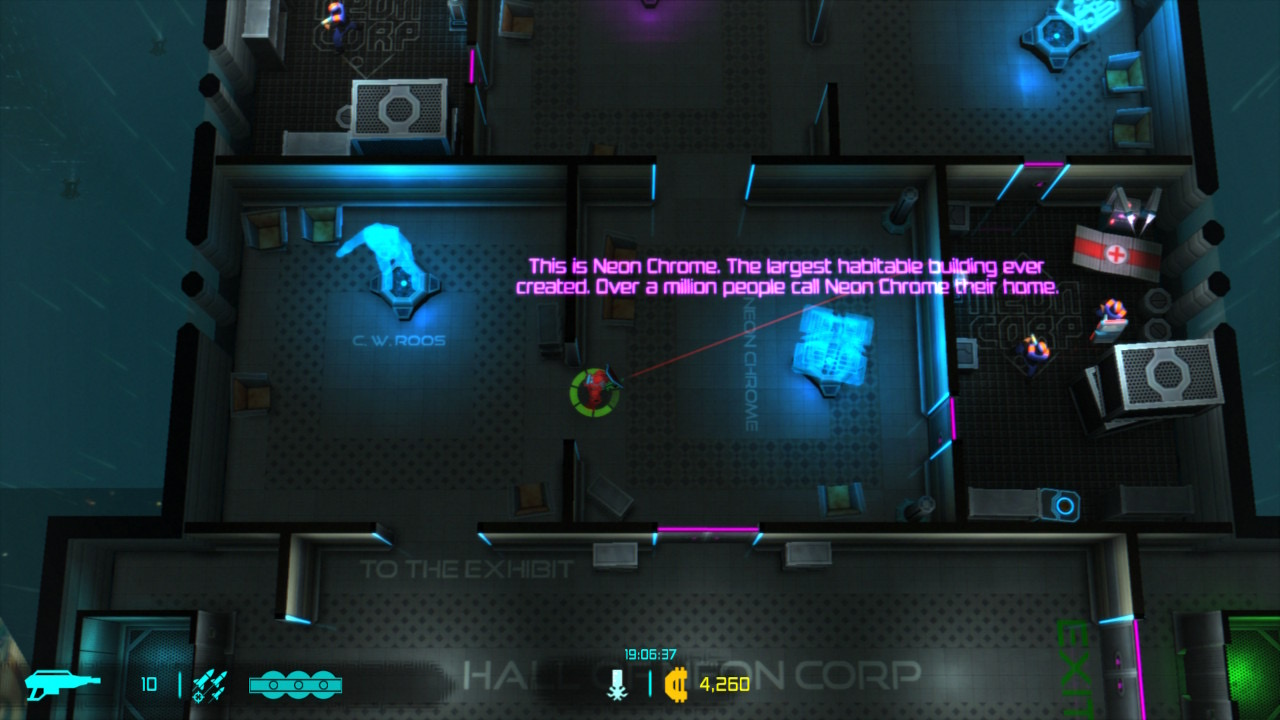 You'll find plenty of obstacles in your way, from scuttling murder-bots and grenade-lobbing guards to spinning laser gates and land mines. There are also some properly tough bullet-sponge bosses awaiting you at the end of each level sequence.

Fortunately, there's a whole heap of powerful firearms at your disposal. From rapid-fire pew-pew laser blasters to one-shot sniper rifles, each packs a distinctive punch.

The game's futuristic office block environments have a somewhat generic feel to them, but they're full of destructible elements.

Flimsy wall panels give way under sustained fire, while glowing orange generators are only a few shots away from being turned into an area-clearing makeshift bomb.

That's not to say that there isn't scope for subtlety in Neon Chrome, with a simple stealth mechanic granting bonus damage if you catch unsuspecting enemies napping.

You could even avoid confrontation and head straight to the exit elevator, stopping only to whack the odd key-carrying guard - though it's both unlikely and ill-advised given the amount of loot that can be hoovered up by rinsing each level. 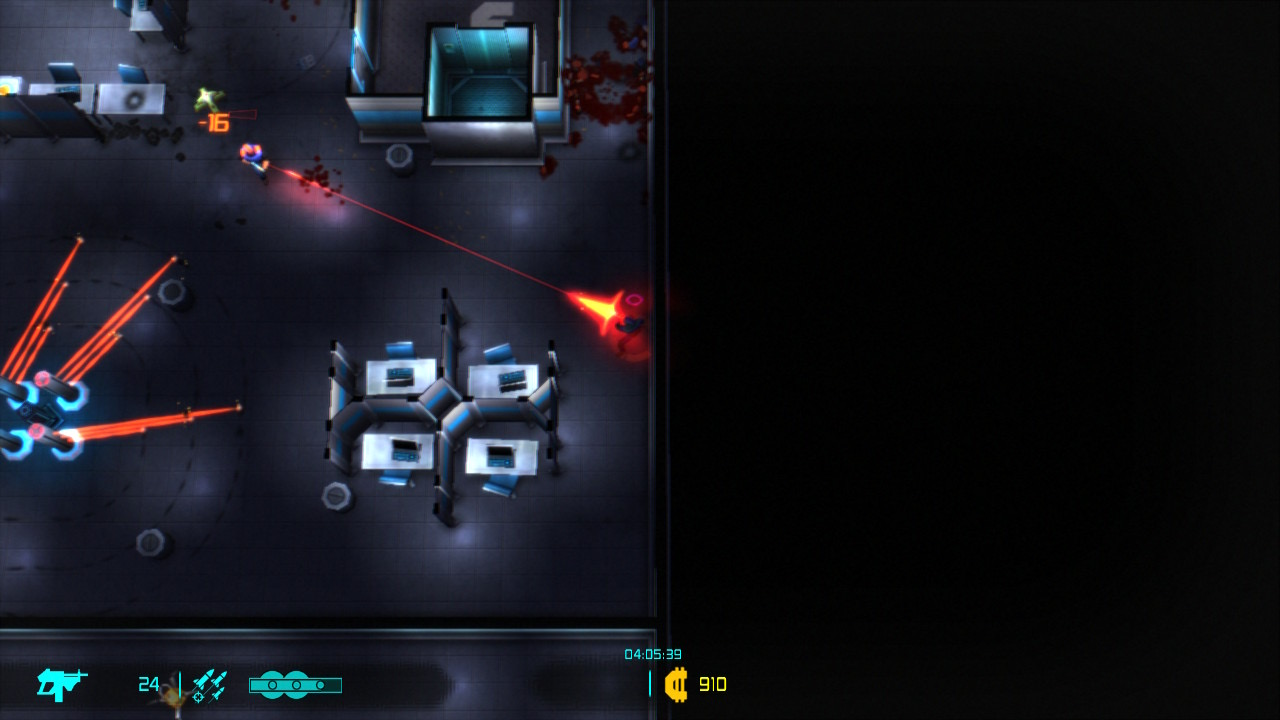 Either way, your approach will partly be dictated by your chosen class. Each of the three random clone types you're presented with ahead of each run has its own unique class-based abilities.

The assassin has a cloaking device, the soldier a riot shield, while the hacker can access bonus loot crates and bypass certain security measures, to name just three.

You'll be able to add to those abilities with periodic upgrade points. These grant special abilities that can boost your health, melee damage, speed, explosive range and various other attributes.

Your credit is welcome here

You'll die a lot in Neon Chrome, but there's remarkably little frustration to it. For one thing most of the levels are procedurally generated, so they're laid out differently each time you play.

For another, you carry your earnings across between deaths, and can spend them on permanently souping up the starting abilities of your clones. It makes for the same 'just one more go' feel that we enjoyed so much in the mobile version. 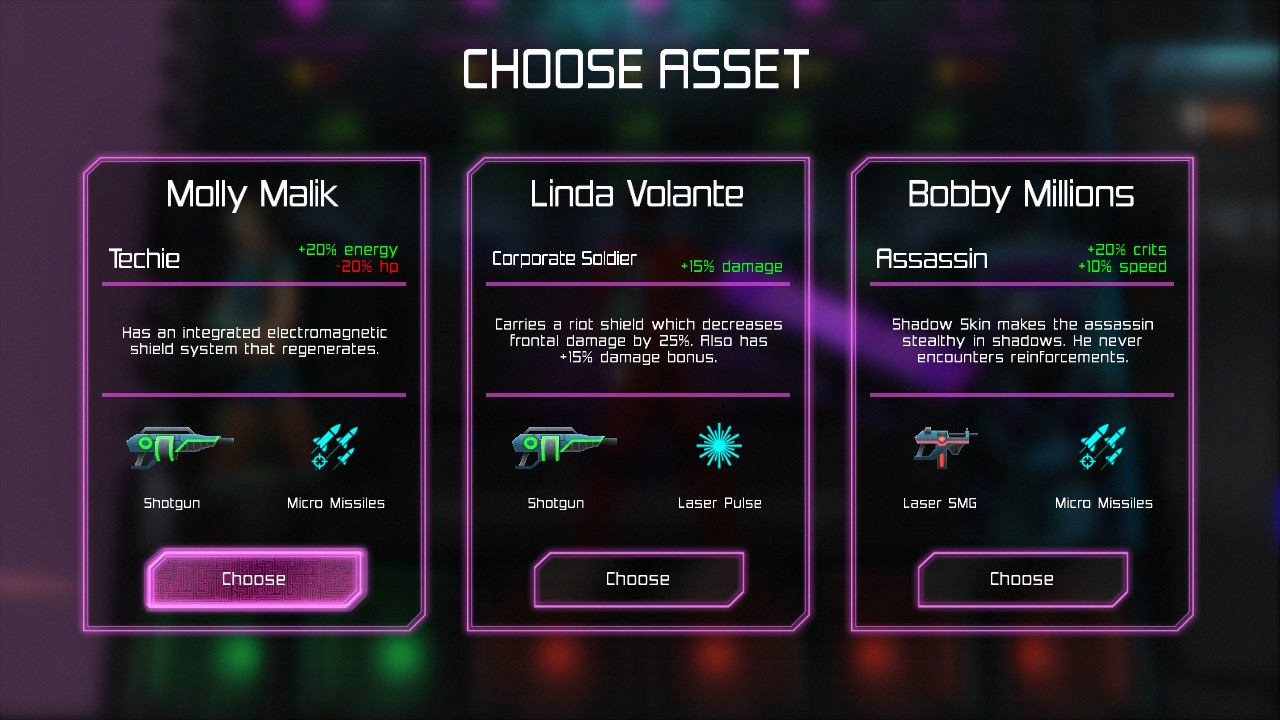 Of course, with this Switch version you get proper physical controls and the potential to play on your TV. I don't know if it's the small analogue sticks of the Joy-Cons or if the developer has tweaked the game's settings, but I found it a little more challenging this time around.

Neon Chrome is also a little fiddlier to play in the Switch's portable mode than I would have hoped for. Text is a little too small and character models a little too indistinct for their own good. It feels like it needs to be sharpened and brightened up, or maybe even zoomed in a little.

Complaints aside, Neon Chrome on Switch remains a thoroughly enjoyable twin-stick shooter, and a worthy addition to a rapidly growing eShop.

Neon Chrome is a solid twin-stick shooter with more meat to it than you might initially expect
Next Up :
Xiaomi 11T Pro review - "Pro in name, pro in nature"