From new characters to new music, there’s plenty to sing and dance about 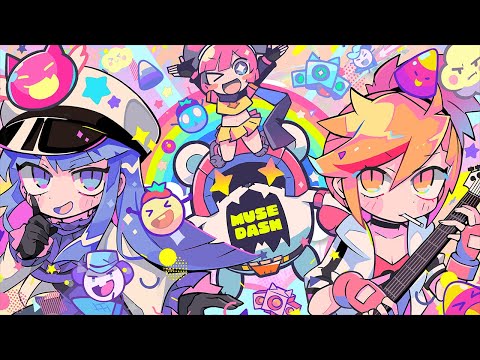 The technicoloured mayhem of Muse Dash has been delighting players for three years now, and the rhythm game shows no sign of slowing down. It recently trended on TikTok – garnering 155 million views – and the upcoming Spring Festival update will deliver the biggest flurry of fresh content since its launch.

For those who don’t know, Muse Dash presents you with a cast of anime-styled heroines with which to beat-up baddies – on the beat. During side-scrolling levels, you swipe in time to a soundtrack of up-tempo pop and electronic music, and your chosen girl biffs the weird and wonderful enemies that bounce your way.
With the 5 February update, there’s lots of new Muse Dash content to keep you hooked. Here are the highlights…

You can look forward to a total of 22 new songs to master – some available off the bat, and others you’ll need to unlock. Many of these are fun collaborations with other projects.

Plus, there are 6 new Easter-egg music sheets to discover and play (hint: try clicking through difficulty levels and see what happens…).

This Spring Festival update also spoils you with a load of new visuals.

Firstly, there are five new illustrations to unlock for free as you level up. For fans of illustrator Terada Tera and her cute ‘chibi’ characters, play Muse Dash between 5—18 February to unlock a new welcome screen by her. And by playing through any of the two themes from Christmas Tina, you’ll unlock an exclusive collab illustration.

Coinciding with this update, Muse Dash is launching the biggest sale in the game’s history. Set to run from 5—22 February, Muse Dash offers an 85% discount, with the Just As Planned DLC Pass reduced by 35% for iOS, Google Play, and Steam; Nintendo Switch users will be able to pick up the game packaged with the DLC Pass, for 35% off.

Although the game offers loads of content for free, those who wish to expand their soundtrack library, cast of characters and trove of illustrations can take advantage of big savings. You might even want to buy the ‘lifetime pass’, giving you access to loads more current and future content.

All that is to say, spring is the perfect time to jump into the frenetic world of Muse Dash, available on Android, iOS, Steam and Switch. Ready? Set? Go.

From time to time Steel Media offers companies and organisations the opportunity to partner with us on specially commissioned articles on subjects we think are of interest to our readers. For more information about how we work with commercial partners, please read our Sponsorship Editorial Independence Policy.
If you're interested in becoming a Preferred Partner please click here.
Next Up :
Exos Heroes’ developers discuss its latest update and upcoming content