RedLynx has some pedigree when it comes to physics endowed platform-racers, and now the developer behind the highly addictive Trials is just as active on iOS as it is on consoles.

The studio's latest touchscreen effort is MotoHeroz, a minimised version of the well-received WiiWare title. Stripped down and fast-paced, the game offers bite-sized tracks, hidden treasure, and the sort of second-shaving gameplay that will have you howling at your iPhone in rage.

It's tough, gorgeous, will make you hate supernaturally talented leaderboard-topping strangers, and is moreish enough to make you forget about the rest of your life.

Your job is to get a vehicle across an obstacle-strewn level, leading it through loop-de-loops, over enormous jumps, and across hazardous terrain. On-screen buttons let you control the vehicle's movement and, more importantly, its balance.

Racing as fast as you can through each of the tracks will end in tears. You need to position your monster truck variant carefully, making sure it's going to land on its wheels and moving its weight around so it doesn't flip.

While crossing the finishing line is sometimes an achievement in itself, it's not enough to earn you progress to the next level. Every time you race, two ghosts are competing alongside you, and you going to have to beat one of them to complete the level.

The blue ghost represents the time you need to beat to score a star on the track. These stars unlock further levels and stages, and also give you cash to spend on upgrading your vehicle. The red ghost represents your closest human competitor on the leaderboards.

Power-ups are scattered around the levels, from speed boosts to sticky wheels and bouncing springs, and learning to use them wisely is vital.

There are treasure chests hidden around each of the tracks as well, and while they''re not essential for completing the game they will give you extra cash to spend.

At its best, MotoHeroz is a remarkable achievement in track design and high score-chasing. At its worst it's a teeth-grindingly difficult battle against fractions of a second. The button you're going to end up pressing the most is the one that restarts the level.

But even when you're being constantly pipped to the post, even when all hope seems lost and your chances of getting that next star seem impossibly remote, you'll keep trying. The game almost goads you into it, with its insidious leaderboards and that hateful red ghost.

This is a cartoon-infused racer that turns its most frustrating features into its strongest points. The difficulty curves might be steep, but the glorious leaps to victory at the end of them make it all worthwhile. 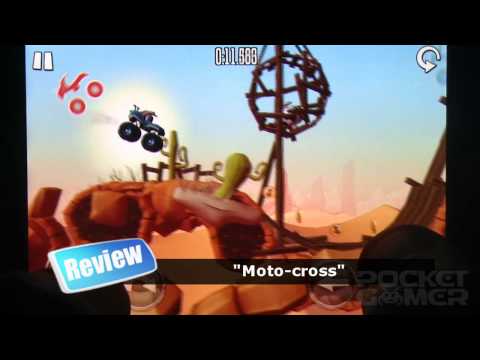 A distilled version of RedLynx's console formulas, MotoHeroz is a hideously addictive platform-racer that turns shaving half a second off your race time into an all-encompassing compulsion
Next Up :
UFO99 review - "A fun little arcade game on the go"