Episode one of Minecraft: Story Mode's second season was unexpectedly good, so the standards were pretty high for this second episode, Giant Consequences.

But, after playing it's hard not to be a little torn by it. From predictable plot points to iffy elements, the whole thing just feels a little... blah.

That doesn't mean it isn't fun, though. No, it's got its good points just like it has its bad points.

This hand is my hand

Following on from the epic sea temple creature battle at the end of episode one, Giant Consequences jumps into it immediately with some action, decisions, and quick-time events.

After kicking the Admin's butt, he drops a clock which can magically alter the time and weather.

And though you fix things temporarily that tricky lad comes back as a rather adorable snowman, turning Beacontown into a snowy wonderland of doom. 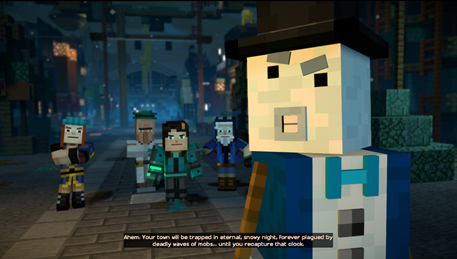 The only way to get your people out of the situation is for you to guide Jesse, Petra, and the rest of the gang to the Admin's ice palace to retrieve the clock.

That way you can save your people from some serious frostbite, among other, more monstrous things.

The characters are still the best feature of the game, and thanks to some complementary and some contrasting personalities, there's never a dull moment. It's also nice that we see a little more of Radar this time around.

Thankfully we get another whack at that pointless but cool Minecraft block-building element. Re-designing Reuben's memorial is more fun than it should be, and it's a nice touch to remind you what world you're in.

The dialogue continues to be strong. With a mixture of humorous and sincere elements, the choices this time around definitely help mould Jesse as a person.

This hand is your hand

This is where things get a bit iffy, because as much as I enjoyed it at the time the general storyline feels more like a side quest. Go to the Admin's place, do one or two rooms, get the clock, big plot twist, you know the drill. 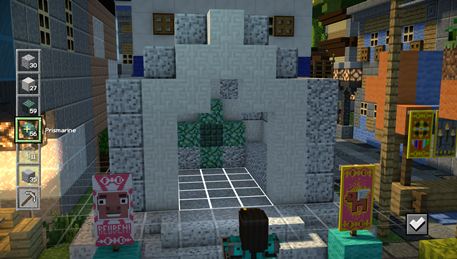 The pacing feels a little off once you get into the Admin's pad. Aside from a bit of talking, several repetitive fight sequences, and more decision making, nothing that significant really happens.

It's also hard to ignore that the mini-game (whichever path you choose) feels pretty clunky. It's definitely a neat idea but, thanks to some dodgy framerates and simple challenges, it's not that hard to get through and not as enjoyable as it could be.

No, wait, that's my gauntlet

Giant Consequences is another entertaining episode with some ups and some downs, plus a stereotypical British-accented bad guy.

The following plot-line didn't quite make an impact and the performance may be a little jittery, but the characters are what drives this episode home. Friendship, trust, betrayal, it's all there.

Giant Consequences starts strong, playing off relationships, but loses its way a bit as the episode goes on
Next Up :
PUBG New State review - "Not-so-new state, but still enjoyable nonetheless"