Selected beta applicants for Minecraft Earth have been accepted into closed, local betas of the upcoming AR spin-off of the popular sandbox series. The official Twitter page for the game has confirmed that it has begun with the London and Seattle areas, with 'thousands' of applicants accepted into the beta across the two cities. 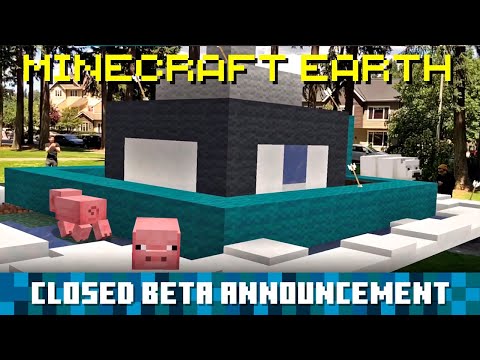 While we are no doubt going to be flooded with a veritable deluge of information as a result of the beta, we already have a strong idea of what to expect in the beta from the recently released beta trailer, above.

Players exist on a digital representation of our world — as players of existing AR games like Reality Clash, Pokemon Go, and Harry Potter: Wizards Unite will be familiar with. Using this map you can then tap on chests and mobs, these each give you items which you can use while creating using 'build plates'. These build plates, which you can unlock more of as you level up, are starting templates for you to build on.

The build plates start as small dioramas which you place on a flat surface. Yourself and friends cam then mine (which in itself can gather more resources) and place blocks, mobs and items onto the plate until you are happy. Once that is done you can then place it as a realisticly scaled model into the real world. Once blown up to full size you can walk around within it, or just leave it there for others to see.

You can still sign up for the beta over on the offiical Minecraft site. You'll need a Microsoft/Xbox Live account, some log in details in order to sign up. It's also only compatible with iOS10 and Android 7 onward, so unless you've got plans to upgrade, if you're running old tech then there's not much point in signing up.

We don't know exactly when Minecraft Earth will be available outside of beta, but when we do we will make sure to let you know.