Every dog has its day: The making of Mimpi

Where platforming is a dream

It wouldn't be overstepping the mark to describe Mimpi, a surrealist platformer fused with puzzle elements, as something of a dream for the Czech studio behind it, Silicon Jelly.

The multilinguists in our audience may have already spotted that 'mimpi' actually translates as 'dream' in Malaysian, and the game itself plays out in a fantasy-like world only limited by the confines of its star's mind.

But, beyond such literal interpretations, Mimpi's dream status also stems from what it represents for the people behind it: it's the studio's first critically acclaimed release.

Given Silicon Jelly is fairly new to the mobile game – with two other games to its name to date – that's no mean feat, either.

"We have one more game in store called BugOcalypse," says Tomáš Klenha, chief producer at Silicon Jelly. "And then one other title, but that one is not 100 percent ours - it was with one other Czech studio that was about to go bankrupt and we helped them finish and publish the title.

"BugOcalypse is completely different than Mimpi, but we have learned lots of stuff from it, as we've all had very little experience with game development."

The decision to make a move on mobile came about when one of the studio's Flash contractors came into the office and showcased a new piece of software that promised to aid its progress – a little engine you just might have heard of, called Unity3D.

Silicon Jelly was so impressed with the engine that, after a bit of research, it adopted it wholesale.

"And that is how it all started about two years ago," says Klenha. "We did some small games which got never published, on which we have learned how to do certain things, and as we managed to build up the strong team of about six people, we focused on some bigger titles." 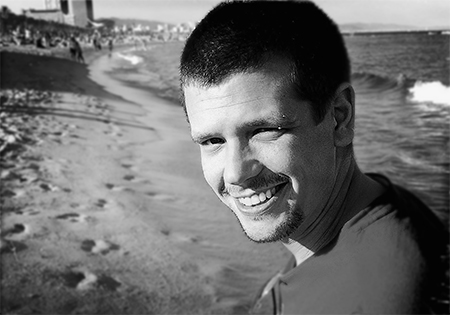 Mimpi - published by Crescent Moon Games and the latest fruit of the studio's labour - is the story of a dog who loses his owner in a dream. As a result, said pup is charged with traversing a variety of strange environments in a quest to find his master.

Said narrative gave the team the freedom to, within reason, do whatever it wanted with the gameplay. Case in point: Mimpi's chosen mode of transport through a hostile ocean is a bubble, encasing him safely in a little pocket of air.

It's this spirit of adventure – of using the freedom both the genre and the game's setting handing them – that defined Mimpi's development throughout, in fact. Before the game's narrative was even a fixture, Silicon Jelly set out with the bold ambition of creating something unique.

Some of the development team had a penchant for puzzle games, while others were more fond of adventures, or platformers.

"We said, lets combine these and see if it can work," says Klenha. "And then one of our creatives came with the basic idea, that the dog is looking for his master in a dreamlike world...and since the story was in a dream, we could do pretty much all crazy stuff we wanted to do with no limitations." 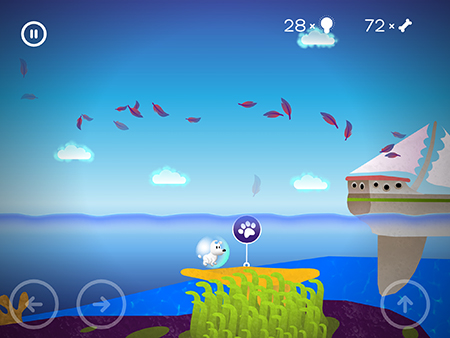 The only thing the team couldn't agree on, was whether the lead was a dog or a cat.

It was a decision that provoked arguments aplenty – a point of conflict that, in the end, paid off. Instead of plumping for just one character, Silicon Valley decided to offer up different character skins as in-app purchases.

Of course, users who don't wish to pay out will play as the original Mimpi by default – a strategy Klenha approves of. "The original was just simply the cutest one," he adds.

The entire look of Mimpi, however, is a key part of its appeal. Though the bulk of the game plays out in colour – beautiful brush strokes flooding the screen – the game's opening cutscene is actually in black and white, serving as a subtle nod to the colourblind status of most pups.

Once Mimpi slips into his dream, however, the colour bleeds through.

"I must say that the main idea maker and illustrator behind Mimpi is very talented," says Klenha. "And he is very young too." The man Klenha is referring to is called Matej Moravec, and he's not only responsible for Mimpi's illustrations, but also much of the gameplay, the story, and the game's environments.

"He was always working on it by himself for couple of months, sometimes weeks," Klenha says.

"When he got into a point where his inspiration got low, he came to me or any other team member, told them a bit of the story and where he'd got stuck and, after a short brainstorming, he was good to go on his own for another few weeks or months."

Design-wise, Moravec made the majority of the game alone, even starting work on the game six months before the rest of the team began to help.

Programmers started working on it when four of the levels were already planned out and illustrated by Moravec. It was still another year once the team got involved before the game was finished, however.

But, aside from the visuals and the gameplay, one other trait Mimpi has been praised for is its music, which adapts to what's happening on-screen.

"The music was done by company called Sype Studios," says Klenha. "It's a small studio of very talented guys. We are cooperating with them on all our titles.

"Basically Matej sent them a set of ten tracks [outlined by] mood and they managed to get it just right on the second time, which is very good, I think. These guys didn't do the sounds effects in the game, though. These were done by our freelance supplier Lukáš Tvrdon."

Despite one person being in charge of Mimpi's direction for much of its development, it wasn't all smooth sailing. Balancing the puzzles, implementing IAPs and finding the perfect game length all caused their fair share of problems.

"The first big change was that we had to make the game easier," says Klenha. "It was really mind-twisting and we wanted to have a wider audience.

"The second big change was the IAPs - we always planned to have the game as premium, but as the market was changing from premium to freemium faster than we expected, and we had to do something about it.

"As we all hate IAP in games, we wanted to have them there just as help or some perks user can buy - simply nothing that the user need to pay in order to continue the game.

"The third big change was that we had to make the game longer than it was in the beginning. But thanks to our development leader Jaroslav Stehlik, we managed to do it smartly and in quite a short time period." 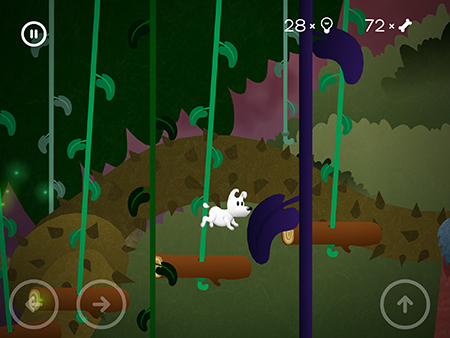 One problem wasn't quite so easily solvable, however: localisation. In the end, the team's solution change the feel of play completely.

"Localisation was the hardest [problem to overcome]," says Klenha. "We realised in mid development that it would be very hard to localise the game. So we ended up doing it completely without words, so we had to redraw a few things and make a new hint system.

"The hint system was a challenge on its own, very difficult to solve properly. And there were also graphic issues. As the game is all in vectors and there are almost no bitmaps, we had to do quite a lot of compromises graphic wise.

"The levels were drawn nicer and with more details than you see now in the game - but still, I think we managed to do it graphically very interesting game."

With the puzzles now devoid of text hints, there's no immediate indication as to what objects on screen can be interacted with, which can result in the player tapping left, right and centre to trigger some form of progress.

Klenha admits that the hint system isn't the perfect solution for this problem, but the studio is still looking at ways of improving the game. The team didn't simply apply a highlight to interactive elements in the end for difficulty reasons.

"We were worried about this and we had some arguments about it," admits Klenha. "But it's a puzzle game and we wanted it to be difficult. And if you look closer and pay attention, the answer is always there."

Some of the puzzle difficulty though, comes from mechanical inconsistency.

There's one puzzle in the game that involves moving a sailboat, with four clouds sat in the sky serving as a blocker. Earlier puzzles allow you to combine clouds to make a rain cloud, but this solution doesn't work here, even though you can get three of the clouds to touch.

This leads to a lot of frustrated tapping, assuming the game isn't responding correctly to your taps. What's really required is some backtracking, however.

"We hear this feedback quite often and we are regretting that we didn't catch this in testing process," says Klenha. "But the update of the game is already out and the hints are much clearer now - the problem should be solved.

"It's much easier than it was - this puzzle was originally solved by blowing air into microphone." 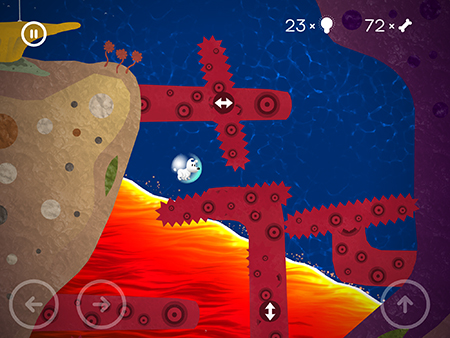 Another criticism the game has recieved is for the size of its virtual buttons. On the platforming sections, it can be easy to slip your thumb away from the jump button at a vital point, sending Mimpi plummeting to his doom.

"The controls are something we are getting worst feedback at," admits Klenha. "But users don't realise that we needed to do this compromise, as you have huge environment which you need to interact with. So if we move the controls up a bit, as some of users request, it would get in way with some puzzles - same thing happens if we make them bigger.

"So what we did in the update for small screens devices is that we moved the move buttons further from each other. We are currently testing a version with bigger buttons, but it will still take some time until we have it solved. Controls were actually huge challenge in general."

This is also the reason the team decided to keep the pace of play relatively slow, paying note to the fact that fast reactions and tvirtual buttons or sticks are not always ideal bedfwllows.

Silicon Jelly is already looking forward to overcoming the next challenge, though: bringing Mimpi to more platforms.

"People are requesting other platforms so, beside some polishing, we are now working on ports," says Klenha. "Mac is coming very soon and Android and game stick will follow before Christmas. Then there is PC and Linux in the queue." 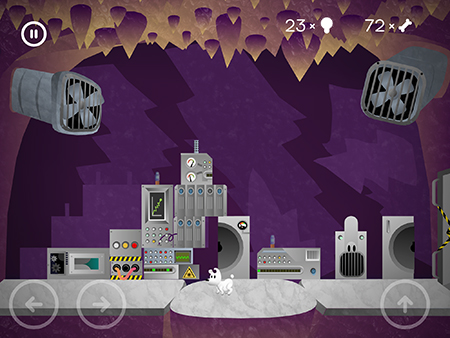 On top of this, the team is working on some concepts for some new IPs.

"We have a few which we favour," says Klenha. "But we are also waiting on some data results from Mimpi to make the final decision. We're also launching free Mimpi mini games to help promote the main game. First one just came out and its on the App Store now."

Every dog has its day, and it looks like Mimpi's time is now.

You can nab Mimpi, Strike Wing, and a host of other Crescent Moon Games titles on the cheap for iOS right now

Surreal canine platformer Mimpi will be coming to Android before Christmas