How low can you go?

Danish developer Playdead's Xbox Live Arcade platformer Limbo has one of the most distinctive art styles around.

It's got that morbid monochrome aesthetic - all pitch-black silhouettes in the foreground, and hazy greys in the back - that makes it look truly unique.

It's no surprise, then, that a handful of developers have attempted to mimic the game's style. The latest is iPhone and iPad puzzle platformer LAD, which shares Limbo's juvenile protagonist, inky black platforms, and gothic forest backdrops.

It certainly has that stark, gloomy atmosphere down pat. At first glance, you could easily be fooled into thinking that Limbo had been ported to iOS. The music, too, is appropriately chilling.

But, sadly, the gameplay fails to match that wonderful art. Your pint-size hero moves at a snail's pace, and seems to accelerate at the speed of a motorised scooter. His jumping arc makes it hard to leap over the smallest of gaps, and his double-jump isn't much better, either. 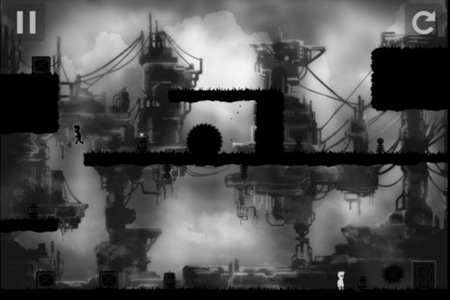 The physics system is completely loopy, which isn't helpful in a game that relies so much on pushing boxes and the like. Simply moving a pair of boxes around is a tedious, brain-numbing task as the character moves all too slowly, and then the two crates get stuck together and refuse to separate.

From the screenshots, it looks like you'll be joined by another child sometime in the game. I couldn't bring myself to trudge through the frustrating first set of levels to get that far, mind. Especially when obstacles and death traps are almost entirely obscured by the artwork.

It's never fun to trash a small game from a startup studio. But, I was excited when I received an email with the subject line "Limbo inspired puzzle platformer", and I know a lot of people would be curious, too, if they saw it on the App Store.

So, take this as a public service announcement - LAD definitely looks like Limbo, but it certainly doesn't play like it.