Kathy Rain: Director’s Cut is out today on Android, iOS, and Steam, with a release on the Nintendo Switch to follow soon. A new and improved version of the popular point-and-click mystery adventure, developer Clifftop Games and publisher Raw Fury's new title takes players back to the 90s with the titular heroine in Conwell Springs.

The revamped detective game expands on the OG Kathy Rain game with additional puzzles and fresh locales for players to visit. There are also over 700 fully voiced extra dialogue lines to keep players engaged in the narrative, as empowered journalism major Kathy Rain returns to Conwell Springs after the death of her grandfather.

Of course, things aren't always what they seem - the more Kathy learns about her grandfather, the more she uncovers the secrets of her hometown. She then embarks on a journey of discovery with her notepad and motorcycle as her only partners on the quest for truth. 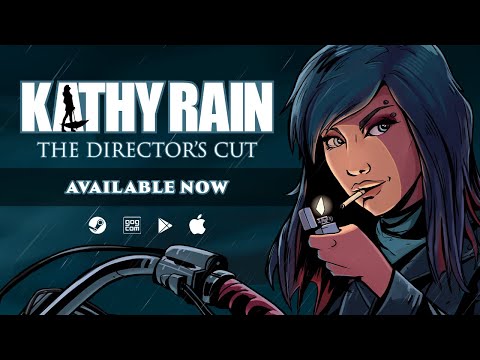 In Kathy Rain: Director’s Cut, the storyline has been extended with a more fleshed-out ending sequence, along with a widescreen 16:9 background plus a remixed soundtrack. Players can now also customize Kathy’s motorcycle, as well as dive into the game with full controller support.

If you're eager to give the updated version of the game a go, you can download Kathy Rain: Director’s Cut on different platforms from the official website. And if you happen to own the original version of the game, you are entitled to a loyalty discount of 50% off. If you're not familiar with the title, you can also have a peek at the embedded trailer above to get a feel of the gameplay.

On the hunt for more point-and-click titles to try on your mobile device? Why not take a gander at our list of the top 25 best point-and-click adventure games on iPhone and iPad (iOS)?

Kathy Rain: Director's Cut, a revamped version of the point-and-click adventure game, is heading for iOS and Android this month