But only if Apple puts more effort into it

We’ll soon be seeing a glut of console ports on the App Store, thanks to deals signed last year when Sega was trumpeting its strong sales of iPhone Super Monkey Ball.

But the sleeper trend of 2009 in iPhone gaming could be social gaming, thanks to firms like Zynga, Playfish and SGN who want to repeat their success with Facebook games on iPhone.

Playfish is keeping its powder dry for now, while SGN has racked up millions of downloads of its suite of free motion-sensing games like iGolf, iBowling and iBaseball. But it’s Zynga which has gone furthest in bringing the social features of its online games to iPhone.

The company has launched one game on the App Store so far, Live Poker, albeit in five different versions ranging from free to £29.99. It's a multiplayer poker game, and the first iPhone game to use the Facebook Connect technology, allowing players to sign in with their Facebook logins.

“We look at games as a vehicle to let people be social,” says founder and CEO Mark Pincus. “To us, a social network is like a good cocktail party, and the games should add the fun or entertainment to the cocktail party. We’re not a company of gamers first: we’re social media first, and gaming second."

That doesn't mean Zynga is making cheap'n'nasty games on any of its platforms - but more that its focus is on the connectivity and community around its games, rather than trying to make the next Halo.

"What we do day-to-day is more like an Amazon or an eBay than an EA," he says. "A game for us is a 24-7 operation, which is constantly changing and evolving."

So what attracted Zynga to iPhone (and iPod touch) in the first place? Pincus is clearly bullish about Apple's platform's potential.

"We like the iPhone because wherever we believe social gaming can grow and flourish, we want to plant seeds,” he says.

"The iPhone has most of the components to be one of the most important social gaming platforms. It has ease of access through the App Store, where games are even more accessible than on a social network. It’s social, and it connects online easily. And, of course, it’s always with you, so the games are always available for you to play. We believe social games will penetrate the iPhone more than any other platform.”

It's for that reason that iPhone is the first mobile platform that Zynga has launched onto - Pincus thinks Android, Blackberry and Windows Mobile are still behind Apple in terms of the components listed above, although he thinks they have potential.

However, that's not to say he's full of unqualified praise for iPhone and the App Store. In fact, Pincus would like to see Apple do more to encourage social gaming.

“The one big limiter for the iPhone is that Apple hasn’t yet turned on the plumbing required to make it a great social gaming platform,” says Pincus, citing Facebook's communication channels from app developers to users, and in between users.

"iPhone doesn’t have a good notification system for example, and there’s no easy word-of-mouth to share games with your friends or invite them to play on the iPhone," he says.

How could Apple change things to make iPhone a better social gaming platform? As you'd expect, Pincus has some ideas that he'd like to see made a priority over at Cupertino. “Apple could replicate what Facebook has,” says Pincus.

“They could have a Home section on the iPhone springboard that creates a social network of all of your friends with iPhones. So you’d register your Facebook or MySpace login with Apple, and they would poll all the interesting information from your friends and give you a Home Centre that gave you feeds from your friends, showed you various messages – including emails and in-network messages – and then on top of that would identify people in your address book, to unlock iPhone-to-iPhone applications for developers.”

Pincus thinks this kind of iPhone-focused hub - tying closely into existing online social networks - would help social games to flourish on the device.

"All the things that make games thrive on social networks would thrive on the iPhone. I could find games to play against my friends, including turn-based games like Scrabulous, or even the ability to see if there’s a live game and join them for a hand of poker. But today, iPhone is 95 per cent a single-player gaming device."

In summary: "If Apple wants to get to a broader gaming market, they have to use the full range of features on the iPhone. That doesn’t just mean the accelerometer: it’s the fact that it’s a phone.”

Regardless of whether / when Apple implements these kind of features, Zynga is planning to continue its push onto iPhone, although not with the blizzard of games you might think.

Pincus says that with the App Store being "even more of a hit-driven environment than the social networks", Zynga wants to take its time developing titles that will work on the iPhone.

"We want to build depth into the social experience," he says. "We're not after downloads and installs, we're after active users. For us, success won't be about an App Store ranking. It'll be about how many active users we have 12 months after launching a game." 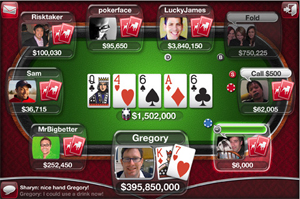 He says Zynga will likely launch one new game in Q1 this year for iPhone, but that the real focus is on improving and evolving Live Poker. Director of product management Sharyn Efimoff explains more, saying that the next release of the game will come out in late January.

"It will add MySpace support, and we're tweaking the UI to emphasise friend relationships," she says. “But the big thing we’re doing is improving the ability to play with friends. I think people want to do that even more so on the iPhone than on the web. We’ve had a lot of emails about it.”

An ongoing question for social games - whatever platform - is how they're going to make money. And in truth, nobody knows for sure, so they're being suitably Web 2.0 about it and focusing on building users while exploring potential revenue streams.

Or, as Pincus puts it: “Revenues are the third priority as we think about building out a business and new markets. For sure, we’re trying to be disciplined and build a real business model, scaling the monetisation as we go. But our biggest focus right now is getting the right games and building active users.”

However, there’s more to say on how iPhone fits in with what Zynga does. Online, social games tend to be free to play, with revenues more likely to come from a mixture of advertising and micro-transactions (virtual item sales, usually).

Of course, the plus point is that there's a proven willingness on the part of gamers to pay for titles, which Zynga is capitalising on with the premium versions of Live Poker. However, Pincus says that micro-transactions will become more important on iPhone in the coming two years.

“Looking out 12-24 months on how iPhone will evolve, I think that micro-transactions and virtual goods will definitely be a part of it,” he says.

“It’s only a matter of time for Apple to figure out how to enable people to one-click buy virtual goods. And advertising already seems to be real on iPhone. We haven’t started experimenting yet, but we’ve heard stories about developers doing five or six thousand dollars a day with a decent-sized app.”

However, Pincus would like to see iPhone advertising evolve, suggesting that someone should create a self-service advertising interface for buying and selling ‘app installs’ between developers, to advertise within one another’s games.

“It would be a great service to the whole industry,” he says. “It would make it far easier for small developers to immediately add monetisation to what they’re doing, and would also give the EAs of the world, who have big budgets, a guaranteed channel for marketing their iPhone games.”

Who should set this up, though? Could Apple do it, or should they leave it to an AdMob-style third-party?

“Apple could do it the best, as that would be the easiest way to track and verify that an install had occurred,” says Pincus.

“I’d love to see them do it, but it could easily be AdMob or some other new startup. But it should be standardised – a standardised little ad unit that iPhone users get to know, like the ad units have become fairly standardised on Facebook now. It’s been a good business for us there, both in terms of selling app installs to other developers, and buying them ourselves.”

He thinks that such a service could help the iPhone gaming market to grow even faster than it is already, not to mention bring in useful revenues for developers targeting the App Store. He suggests that the affiliate model will become much more important to iPhone gaming in this way.

“The affiliate model is primed to work perfectly on iPhone,” he says. “Anyone who’s selling an app for ten bucks should be willing to put that out as an affiliate model. By the end of 2009, that will be the biggest revenue outside of the App Store for iPhone games.”

What’s more, Pincus thinks it might also encourage iPhone users to switch between games more often. “The mindset of people around iPhone apps is just not online enough, but I think that will change this year,” he says.

“When people launch an app, they shouldn’t think of it as a disconnected widget, but instead as a portal to the online world. So for example, someone might play poker, but between hands go and try out another game they’d noticed, and then come back to poker.”

All in all, Pincus is positive about iPhone, and the wider prospects for social gaming in 2009. And like most people in the nascent social games space, he thinks that these titles are helping to expand the games industry way beyond the expectations of traditional console publishers.

"The games industry has talked about the mass-market and going broader, but the way they went after that was to get the rights of major movies like Harry Potter and do games of those, which was pretty limited,” says Pincus.

“But if you look at what's happened from Wii through to Scrabulous, you can see something else going on that's bringing in a completely new audience. But for a large video game maker, that's a tough transition. It’s like the US automobile industry being tooled up to make big SUVs, and then suddenly having to switch to making little electric cars."